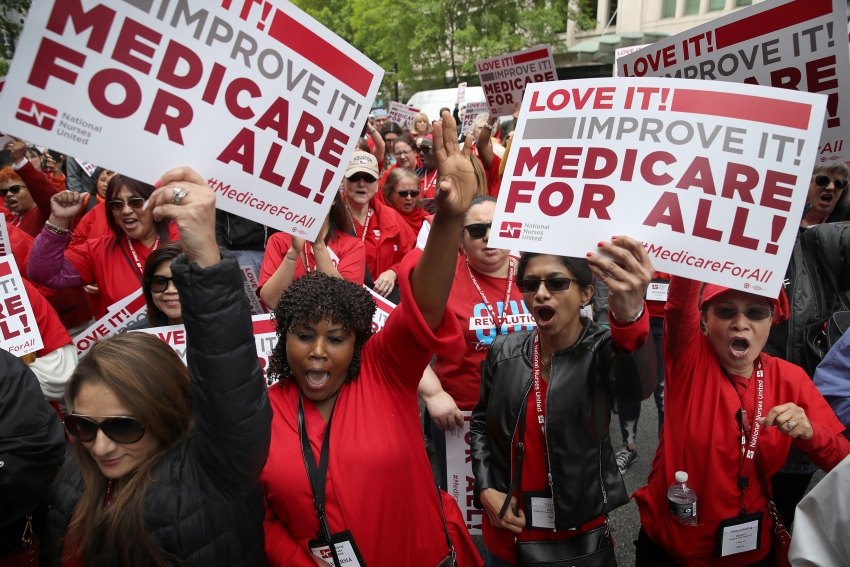 Why the Argument that Medicare for All Will Curtail “Freedom” Is So, So Wrong

Joe Biden and other centrists are deploying cynical arguments to defend the for-profit insurance system. We shouldn’t buy it.

Debate over the future of American healthcare has led off every Democratic presidential debate so far this year. While Bernie Sanders and Elizabeth Warren have defended a Medicare for All system that would guarantee healthcare as a right, other more centrist candidates have sought to undercut such a plan—and they’ve been led by Joe Biden.

Ahead of Tuesday’s debate, Bloomberg reports, the Biden campaign has been “testing messages designed to undercut support among Democrats for Medicare for All.” The survey, commissioned by Wall Street-funded Democratic think tank Third Way, road-tested fear-mongering rhetoric that was crafted by the for-profit health insurance industry—and sounded a lot like Republican talking points.

Biden isn’t alone. In the last debate on September 12, Pete Buttigieg, Amy Klobuchar, Kamala Harris and Beto O'Rourke all joined him in falsely suggesting that people would lose choice and freedom under a Medicare for All system.

O’Rourke called Medicare for All “an all-or-nothing gambit, forcing tens of millions off of insurance that they like, that works for them, to force them onto Medicare.”

Amy Klobuchar echoed, “149 million Americans will no longer be able to have their current insurance.”

Harris, meanwhile, said candidates should be “offering people choice, not taking that from them,” while Buttigieg claimed, “I trust the American people to make the right choice for them,” asking Sanders: “Why don’t you?”

This portrayal of private insurance plans as bastions of choice and freedom isn’t just misguided, it serves to defend profit-hungry companies at the expense of the millions upon millions of Americans who would benefit from guaranteed health care and financial security provided by a single-payer, Medicare for All system.

Biden and his ilk make the critical mistake of conflating coverage with care. They assume that people “covered” by subsidized private insurance plans can actually get care, and can do so without going broke—but that’s simply not true.

From 2005 to 2018, some 60 million Americans per year—including one half of the insured population—were forced to skip or delay medical care. In 2016, a survey conducted by the Kaiser Family Foundation in partnership with the New York Times found that 85 million Americans were in medical debt. Of those, roughly 6 in 10 were insured.

The government can help extend private coverage to more people, but insurance companies will keep pushing costs onto us, keep dropping treatments, medicines, and doctors from their plans, and keep denying our claims. The only real solution is universal, guaranteed healthcare.

The attacks on Medicare for All also betray an impoverished understanding of freedom as a choice between insurance products. But people don't want a choice between Aetna and Cigna. They want the freedom of guaranteed healthcare; the freedom to choose their doctor, hospitals and treatments; and financial freedom from insurance, hospital and drug bills.

While claiming to recognize healthcare as an inviolable human right, Biden, Buttigieg, Klobuchar, Harris and O'Rourke also ignore the deep inequities produced by the multi-payer insurance system they defend. The plans put forward by Biden, Buttigieg and Klobuchar would leave millions of people uninsured, and though Harris and O’Rourke’s would get everyone coverage, none of these plans would guarantee all medically necessary care.

Rationing care on the basis of these non-medical economic indicators is incompatible with guaranteeing healthcare as a right, and also reproduces racial and gender inequities. Because the most robust coverage is reserved for those with formal full-time employment in lucrative economic sectors, comprehensive care is disproportionately denied to Black and brown communities facing high unemployment, immigrants working in low-wage industries, and women working in part-time jobs and unpaid domestic labor.

Separate-and-unequal coverage doesn’t just hurt those at the bottom. By accepting and institutionalizing the notion that some people are more deserving than others, tiered coverage is precisely what makes U.S. healthcare both precarious and vulnerable. This vulnerability breeds fear of losing one’s coverage, which for decades has been exploited to stifle reforms and feed relentless attacks on public programs and social solidarity.

Medicare for All, in contrast, would guarantee a single standard of care to everyone. The plan introduced by Sanders in the Senate would provide all medically necessary care, comprehensive long-term care, mental health, reproductive, dental, vision and all other care people need. Everyone in the United States would be guaranteed seamless care from cradle to grave, freeing us up to move in and out of jobs and relationships without worrying about medical care, and we’d never have to deal with an insurance company or medical bill again. Healthcare would be provided to all of society as a public good like fire protection rather than as an individually rationed commodity. What’s more, Medicare for All would do all this for less than it would cost to keep propping up the private insurance system.

While Biden and Third Way may be polling language to attack such a Medicare for All system, the case is clear: the “freedom” to “choose” for-profit insurance is a false choice. Medicare for All is wildly popular because it would finally provide comprehensive healthcare to everyone. Democratic leaders should stop using insurance industry talking points and Republican fear-mongering to tell people otherwise.

Ben Palmquist is a campaign manager at the National Economic and Social Rights Initiative.