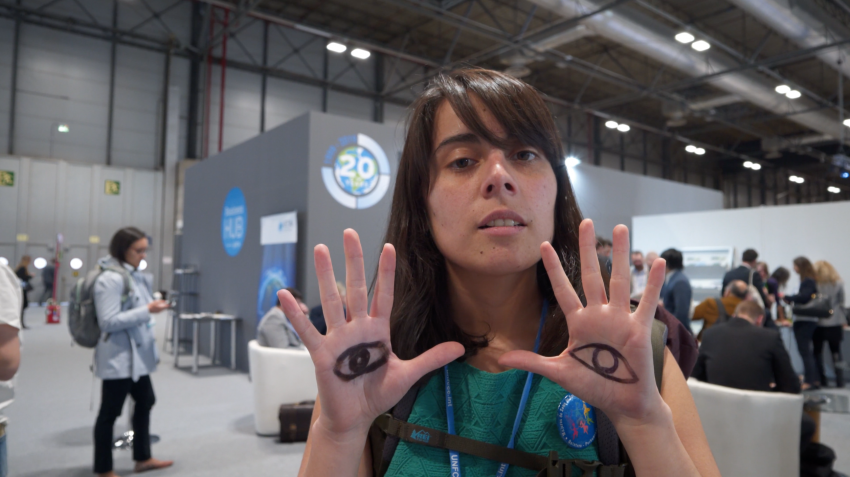 Youth Activist to Chilean Leaders: Don’t Use the UN Climate Talks to Greenwash Your Repression of Us

“We are fearless,” says Angela Valenzuela.

"We cannot sustain a system that sacrifices people and drives the climate crisis for the benefit of a few."

MADRID—At a press conference at the UN climate negotiations in Spain this week, 25-year-old Angela Valenzuela, a climate activist from Chile, publicly denounced her country’s government for using this annual meeting of world leaders to “clean” its reputation and deflect attention from street protests that have left at least 18 people dead and fueled allegations of excessive force, torture and sexual assault by the country’s security services.

More than a million people have taken to the streets in the South American country since the protests began in October. They continue today. More than 11,000 people have been injured by security forces and business interests, and thousands more have been arrested in protests and looting initially sparked by a subway fare hike. The fare increase, reductions in public spending and other economic austerity measures were mandated by the International Monetary Fund (IMF) as conditions of a loan package aimed at stabilizing the country’s economy, which is suffering falling revenue from mining and other exports. But the underlining conditions that set the movement in motion go much deeper and are inextricably intertwined with the country’s climate change-driven ecological problems, as Valenzuela told a packed room of journalists from around the world.

“It’s not about 30 pesos; it’s about 30 years of democratic governments that failed to protect us and listen to our demands. Chile woke up. We said enough. We cannot sustain a system that sacrifices people and drives the climate crisis for the benefit of a few,” said Valenzuela, who is a coordinator with Fridays for Future in Chile. The event took place at a  convention center on the outskirts of Madrid, where this year’s climate negotiations were moved after Chile canceled due to the protests. The government of Chile still held the presidency and remained at the helm of the annual conference.

She was met with the cheers and whoops of other youth and indigenous climate activists, who have stormed the halls of the annual negotiations, now in their 25th year with little to show for them. Young people from around the world, including an indigenous delegation sent to the talks this year by the U.S.-based SustainUS, have shadowed oil company executives and dogged world leaders here to call attention to the failure of countries and governments to take bold action to arrest climate change.

Valenzuela told reporters at the press conference, which took place Monday, that it was outrageous to see “how the Chilean government paints its image with empty words while committing human rights violations every day. This must stop now.” She added, “we are fearless. We continue to flood the streets, even if we are risking our lives. We are really finding our future and pushing the limits of what we think is possible.”

While in Madrid on Wednesday, In These Times caught up with Valenzuela and asked her to elaborate on the connection between social unrest and climate change in Chile and respond to climate deniers in the United States, who have seized on the unrest in that South American country to spread the “fake news” that Chile’s climate policies—not climate change itself—drove up the cost of living leading to the massive street protests taking place there.

In These Times: At the press conference, you mentioned how the last 30 years of government policies had failed the Chilean people, creating the conditions that led to the street protests. Can you elaborate?

Angela Valenzuela: It’s an economic system based on social inequality. This is the same system that’s driving the ecological and climate crisis. That's the connection between the social crisis and the environmental crisis.

People are in the streets now in Chile because they are fighting for a dignified life, where basic social rights like access to education, health care, minimum wage and pension systems are provided by the state to ensure that people can develop and grow to the fullest potential, which is not the case in Chile.

And at the same time, we have 100% privatized water. This is even worse when we are facing the effects of the climate crisis. We’ve been having our worst drought for the last 10 years. And having access to water is even more difficult when water is privatized and in the hands of the corporations to exploit for mining and for the monocultural agricultural system. So we not only have to tackle the climate crisis but the very system that is driving us to climate chaos.

In These Times: In the United States, climate change deniers have seized on the protests in Chile, saying they were caused by expensive and unnecessary climate policies—not climate change itself. Earlier this month the Heartland Institute’s James Taylor penned an article claiming “climate alarmists killed their own UN conference” through “aggressive Chilean climate policies that have raised energy costs, raised transportation costs, and taken money out of Chilean household budgets.” The article has since made the rounds of an assortment of online climate denial outposts. What is your response to things like this?

Angela Valenzuela: There is a huge movement of climate deniers since the 1970s. We know that that science is saying climate change is a fact. So I’m not surprised there are these protests against the climate movement.

What would be my response to them is that they listen to the science rather than the fairytales of the system; that they take themselves out of their comfort zones and listen to science and also the basic rights of humans in the Global South to have access to a present and a future free of climate catastrophe.

In These Times: Speaking as a member of the international youth climate movement, what does the world need to do now to take action to bring down climate changing emissions? Are countries getting the job done at this UN climate meeting?

Angela Valenzuela: First the world needs to recognize that we are facing a climate emergency. It’s a climate crisis—an ecological breakdown. Once we can understand the scope of the problem, we will be able to find solutions that can address the urgency of it. As civil society, we need to strengthen our climate justice movement at the local and global levels in order to hold our leaders accountable. We are lacking the political will in order to have the changes necessary to stay below 1.5 degrees Celsius.

We have the solutions. We know we have to cut fossil fuels and we have to transition to 100% renewable, non-conventional energy. But the world leaders don’t want to listen. Instead, they have focused their conversation on market-based mechanisms and loopholes on how to continue profiting out of the climate crisis. This is unacceptable. What is needed now is a global movement fighting to ensure we have a present and a future.

This interview has been lightly edited for clarity.