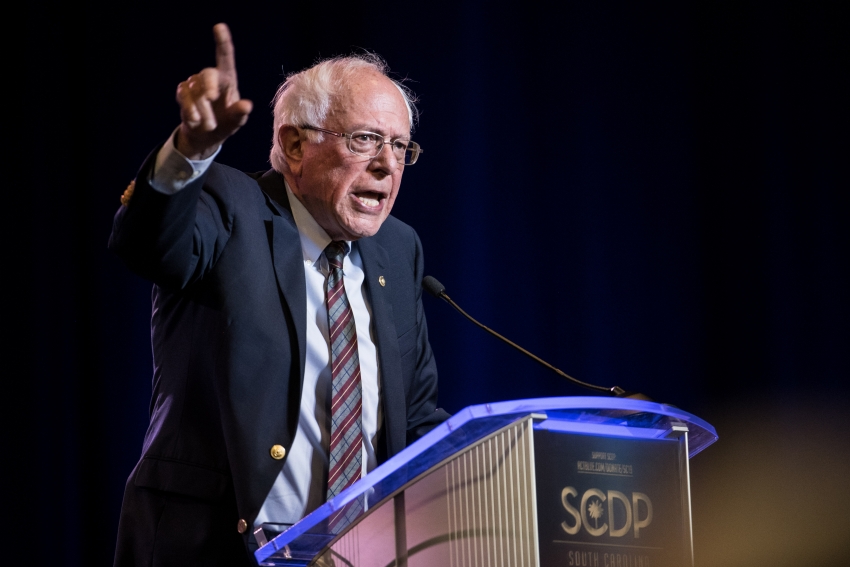 Corporate media has moved from denial to anger.

Remember when the big winner of New Hampshire was third-place finisher Amy Klobuchar?

“Bernie Sanders may have come first in New Hampshire, but Amy Klobuchar won,” Bloomberg declared (the media company, not the billionaire candidate who owns it). “I would almost argue that a third-place finish for Amy would be stronger and more important than a first-place finish for Bernie,” MSNBC commentator Adrienne Elrod asserted.

That’s not how it worked out, of course; since February 14, Bernie Sanders has gone from a 4-point lead to a 12-point lead over his closest rival, Joe Biden, in national polling averages, while Klobuchar remains in fifth place. In the Nevada caucuses held February 22, Sanders got twice as many final votes as No. 2 Biden, whom Sanders was trailing in the polls as recently as ten days earlier.

Caucus entrance polls found the Vermont senator was the top choice of both men and women, whites and Latinos (though not African-Americans, where he was second to Biden), all age groups except those 65 and older, Democrats and independents, union households and non-union households, and those with and without college degrees. He had the most support among those described as “very liberal” and “somewhat liberal,” and tied Biden among those labeled “moderate or conservative.” 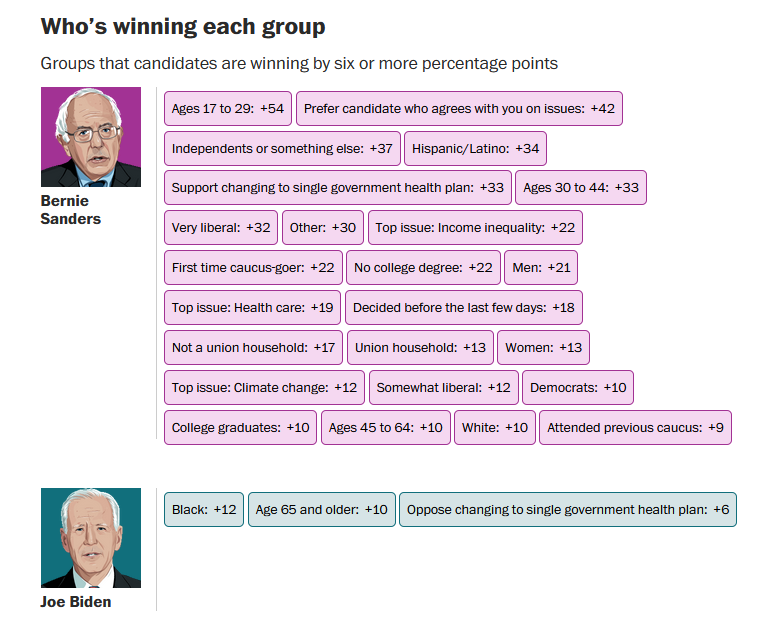 According to the Nevada entrance polls, Bernie Sanders and Joe Biden were the only candidates to win any sampled group by 6 percentage points or more.

So while there’s still some coverage that might be said to be stuck in the denial stage about Sanders—“Nevada Caucuses Win Would Make Bernie Sanders a Weak Front-Runner” was a late entry in that genre—for the most part corporate media have moved on to the next stage of grieving, which is anger.

I was reading last night about the fall of France in the summer of 1940. And the general, Reynaud, calls up Churchill and says, “It’s over.” And Churchill says, “How can that be? You’ve got the greatest army in Europe. How can it be over?” He said, “It’s over.”

(Sanders communication director Mike Casca responded: “Never thought part of my job would be pleading with a national news network to stop likening the campaign of a Jewish presidential candidate whose family was wiped out by the Nazis to the Third Reich. But here we are.”) 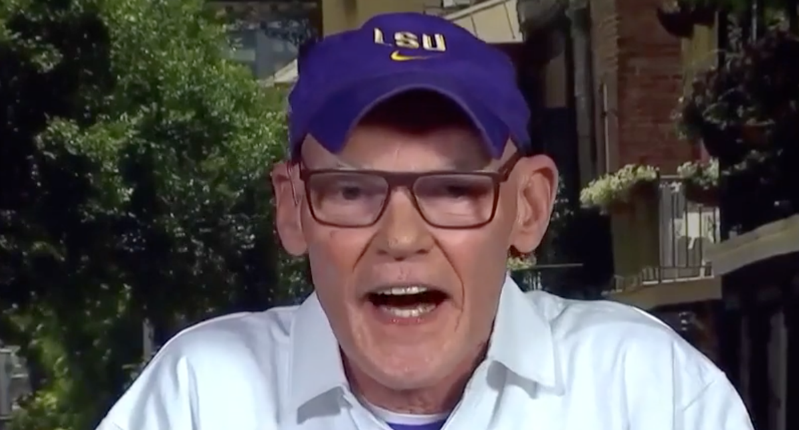 James Carville on MSNBC compared the idea that you can win elections by increasing turnout to climate denial.

The entire theory that by expanding the electorate, increasing turnout, you can win an election is the equivalent of climate denier…. People say that, they’re as stupid to a political scientist as a climate denier is to an atmospheric scientist.

An actual political scientist might point out that turnout has varied over the last five presidential elections from a low of 50.3% in 2000 to a high of 58.2% in 2008—a difference of some 25 million votes, far more than the popular vote margin even in a relative landslide like 2008. Still, Deadline: White House host Nicolle Wallace was impressed: “You’re describing what sounds a lot like political suicide,” she replied. “I think we need a psychologist to understand that.”

The man cares nothing for intersectionality. And I don’t care how many people from the Island of Misfit Black Girls that you throw out there to defend you on a regular basis.

Fred Hiatt, editorial page editor of the Washington Post, followed the tired trope of equating Sanders to Donald Trump—in this case, because “both reject the reality of climate change.” Trump does so, of course, by rejecting the reality of climate change, while Sanders is his mirror image in “utter unseriousness” with the “fantasy extremism” of his climate plan—because, for example, he would ban fracking. Hiatt’s sole source for his critique of Sanders’ climate plan, incredibly enough, is an oil company CEO—who offered pearls of wisdom like: “Change will not come from changing the source of supply…. You have to reduce demand.” 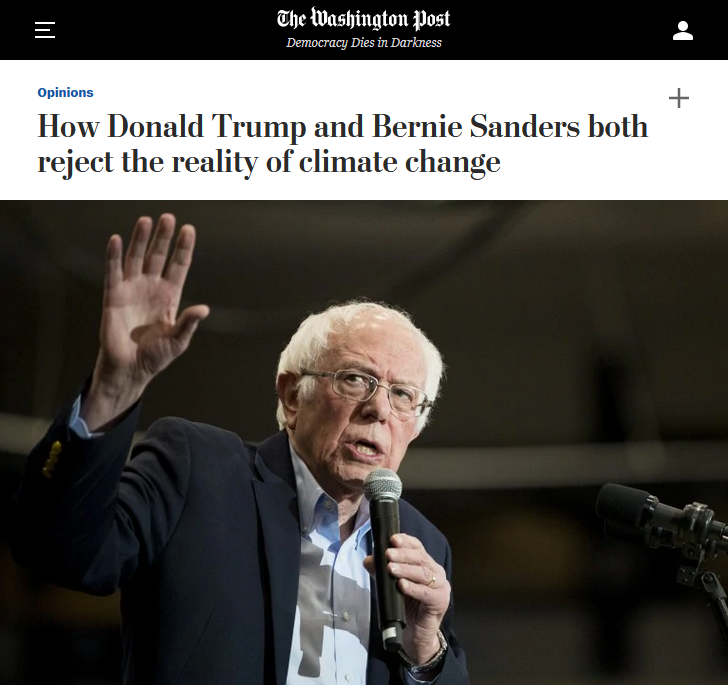 The Washington Post‘s Fred Hiatt accuses Bernie Sanders of “utter unseriousness” on climate change because an oil CEO doesn’t like his climate plan.

Not to be outdone, the news pages of the Washington Post warned that a Sanders nomination “could narrow the party’s already slim hopes of retaking the Senate majority and fuel GOP dreams of reclaiming the House.” The article offers a variety of lines of attack that might deflect the Sanders threat, including the assertion that “Sanders had the worst standing against Trump among college-educated white women,” the (false) claim that he “is proposing to take away the healthcare of 180 million people,” and the assertion that “Bernie Sanders is a socialist who supports un-American, big government plans that will spend trillions of dollars, lead to higher taxes, and destroy our way of life.”

To tout the effectiveness of such attacks, Mike DeBonis and Michael Scherer inaccurately reported that “the senator from Vermont has not yet been subjected to a negative paid advertising effort.” In fact, in Iowa and Nevada, the AIPAC-allied super PAC Democratic Majority for Israel spent a total of $1.4 million on negative ads targeting Sanders—focusing not on his criticism of Israel, but on his socialism and health issues. (By comparison, Klobuchar spent a total of $2.5 million in advertising in these states.)

The New York Times likewise laid out a litany of attack lines against Sanders:

In the early years, there was his commentary on gender relations featuring a rape fantasy, his support for the Sandinistas and his honeymoon in the Soviet Union.

Once he entered Congress, there were votes to shield gun manufacturers, a commitment to remaining uncommitted to the Democratic Party, and secret plans to mount a 2012 primary challenge against President Obama.

And more recently: the FBI investigation into his family, the heart attack, the resistance to detailing the costs of his signature policy proposal, “Medicare for All.” 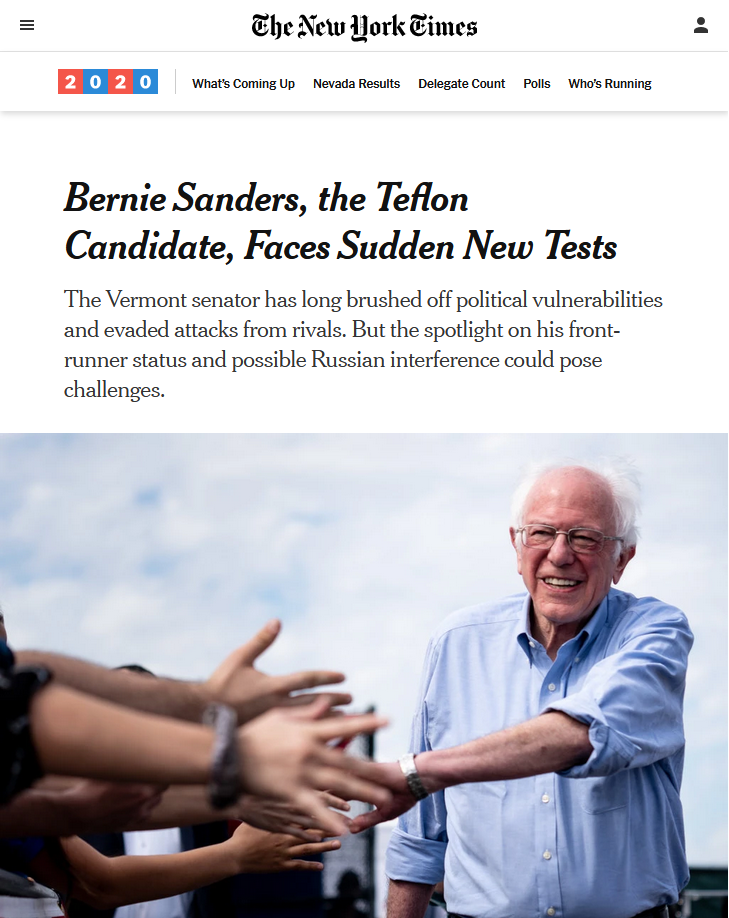 The New York Times published another in a long line of attacks on Bernie Sanders that insist that he’s never been attacked.

In what has become a trademark of articles attacking Sanders, the article asserted that there have been no such attacks:  “He has not faced the same vetting and scrutiny that other front-runners have faced,” reporter Lisa Lerer claimed, quoting the head of the Big Tent Project, another dark money group running ads against Sanders. The reality is that Sanders has been repeatedly attacked—by rivals and by corporate media—going back to the 2016 race and continuing through to the current race. Remember the Washington Post’s 16 negative stories about Sanders in 16 hours?

According to Joe Lockhart, former press secretary for President Clinton and more recently a corporate communications consultant whose clients have included Microsoft, Verizon, Pfizer, the Saudi government and the US Telecom Association, what’s needed are more such attacks on Sanders, and pronto. In an opinion piece for CNN, Lockhart insisted:

Bloomberg needs to use the next $400 million in ad spending to attack Sanders on his potential weaknesses in a general election and highlight how far left his campaign is. Hitting him on his past record on guns is a must…. Sanders’ praise of Soviet-backed regimes is ripe for political attack ads. 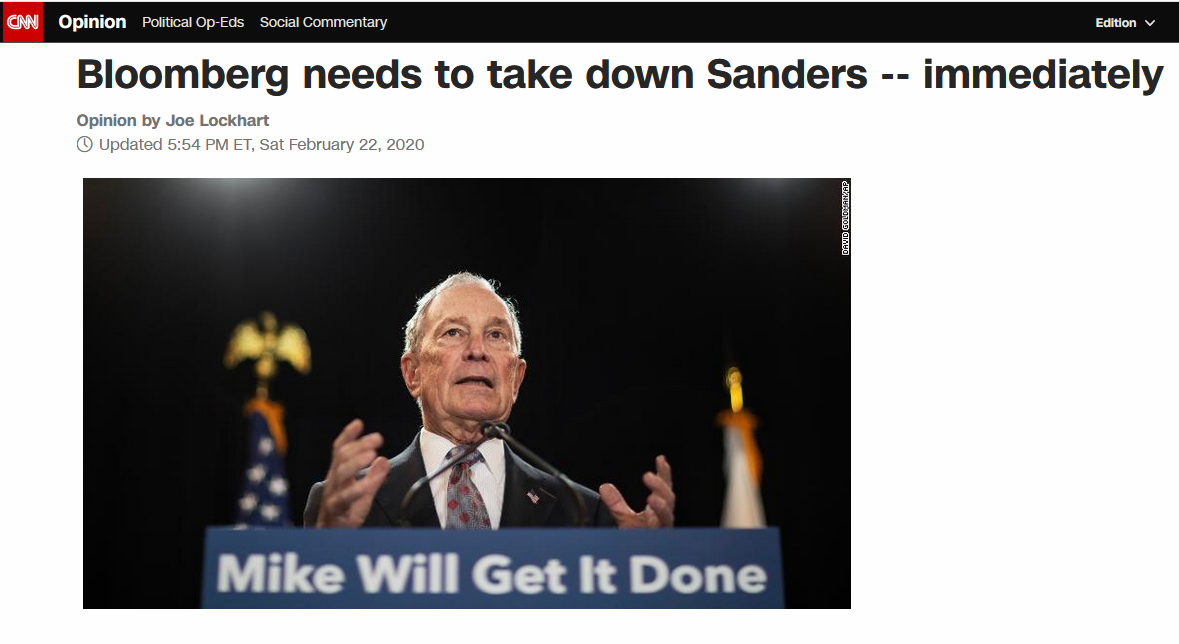 Joe Lockhart urges Bloomberg to realize that his “enemy is not Trump. It’s Sen. Bernie Sanders.”

Lockhart is open about Bloomberg having only a money-based strategy: “With his disastrous performance in the Las Vegas debate, it appears he won’t be building any organic momentum in this race. He has to buy it.” Bloomberg, in turn, has made it clear that his plan is not to get the nomination by getting the most votes in the primaries, but to deny Sanders a majority of delegates and then become the choice of the convention with the help of unelected superdelegates. As Politico reported:

Mike Bloomberg is privately lobbying Democratic Party officials and donors allied with his moderate opponents to flip their allegiance to him — and block Bernie Sanders — in the event of a brokered national convention.

Now, the prospect of a recently Republican billionaire launching a scorched-earth attack on the party’s most popular politician to buy the nomination seems like a recipe for electoral disaster—promising not only a Trump re-election, but a Republican recapture of the House and a sweep of statehouses that would ensure gerrymandered GOP domination of politics at least through 2030. Is that enough to dissuade the Democratic establishment from following such a path?

There are already signs that some corporate Democrats might see a Trump victory, at least, as a small price to pay for a Sanders defeat. “I think I might find it harder to vote for Bernie than for Trump,” former Goldman Sachs CEO Lloyd Blankfein, a backer of Hillary Clinton and a frequent visitor to the Obama White House, told the Financial Times “At least Trump cares about the economy,” said the billionaire, who wants to be described as “well to do” rather than rich.

And MSNBC’s Matthews pointed to a silver lining for corporate Dems in Trump’s re-election. “I’m wondering if Democratic moderates want Bernie Sanders to be president?” he said. “Do they want Bernie to take over the Democratic Party in perpetuity? Maybe they’d rather wait four years and put in a Democrat that they like.”

Translation: After four more years of Trump, Democratic voters will settle for anyone who’s not Trump, like party elites think they ought to.

This article first appeared in FAIR.