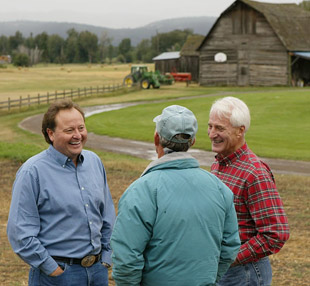 Montana governor Brian Schweitzer based his agenda on conversations with ordinary citizens.

Man with the PLAN

Last November 2, as progressives watched state after state turn red in the presidential race–and in Senate races that were supposed to be close–something funny was happening in Montana. The state that went for Bush by 20 percent handed a solid victory to a new Democratic governor, 49-year-old rancher Brian Schweitzer. And, unlike other elected red-state Democrats, it quickly became clear he was not going to be alone at the top.

Along with the governorship, Montana Democrats seized three other important statewide executive offices, held their majority on the state’s Public Service Commission, took a majority in the State Senate and fought their way to a 50-50 draw in the State House.

Since then, Democrats across the country have turned to Montana for answers and hope. Some critics denigrate Schweitzer’s victory, claiming that a red-state Democrat must simply be a Republican lite. But that analysis falls flat: Schweitzer is a strong proponent of choice, as well as an advocate for the environment and for middle-class Montanans. And those who have seen the outspoken Schweitzer challenge the Bush administration in the press lately realize: Real Democrats, not faux Republicans, won in Montana.

If Democrats can succeed this well in Montana, they can win anywhere. The question is how.

A decade ago, the Montana Democratic Party began a period of rebuilding. The Republican Party held the governor’s office and controlled both chambers of the legislature by overwhelming majorities. The Democrats committed themselves to the basics. They engaged in a strategic planning process that defined clear, attainable goals. They focused on recruiting candidates who would work hard and win. And they trained candidates and volunteers in the organizing model of grassroots advocacy groups. Democrats soon started making gains in legislative races.

But 2000 was to prove a bad year for Montana Democrats. With Al Gore running, the Democrats lost the top-of-the-ticket race by 25 percent. Bush’s coattails proved too much to overcome down-ticket and strong, experienced Democrats lost their races for the governor’s office and for Montana’s lone House seat.

But neither of these tested candidates made the best showing for a Democrat in Montana that year. That title went to Schweitzer, who at that point was an upstart rancher from northwest Montana who started his campaign for U.S. Senate with zero percent name recognition and ended it as the populist hero who took seniors to Canada for cheaper prescription drugs.

Meeting the man, it is clear how he grew in the public mind. Schweitzer is a big man, athletic, and ready with a handshake and a smile for anyone who greets him. He talks loudly, plainly and quickly, with ideas flowing out of his mouth at near breakneck pace. He works hard, sleeps little and is known for reading Montana’s newspapers as they become available online in the wee hours of the morning.

When a reporter from an independent weekly newspaper visited his ranch to write a profile, Schweitzer took him shooting. After he won the gubernatorial election, Schweitzer threw a massive inaugural ball with three venues and more than 3,000 guests. When Butte, Montana’s famous M&M bar reopened, Schweitzer stood in the middle of the bar at 10 a.m., downing a shot of Jameson’s.

Five years later, when he is asked what he could have done differently in 2000, Schweitzer shrugs off the defeat. “That race against [Republican Senate opponent Conrad] Burns,” he says, “was probably an unwinnable race because of how well Bush did.” Nevertheless, he brought the race to within 4 percent and made a name for himself.

Both Schweitzer and the Democratic Party walked away from 2000 realizing they would have to do more in order to win the big races again.

“We ran a good race and had good candidates,” explains Brad Martin, the executive director of the Montana Democratic Party. “One thing that became clear was the impact of the presidential race on the state races. Essentially, our statewide candidates made up a 25-point deficit. That means about 20 percent of Bush’s voters were crossing over and voting Democratic in one of those races.”

It became the party’s job to narrow the margin in the presidential race. So, Martin says, the Democrats decided to make sure that their Montana candidates did not fall prey to national Democratic stereotypes. They sought out key constituencies by starting agriculture, small business and sportsman roundtables. The party hired a communications director to move beyond the basics of press releases. And the party recommitted itself to building its grassroots base–central committees and volunteers.

Montana Democrats realized they had another problem, according to Martin. Voters didn’t know that Democrats had an economic plan. “The party did a statewide listening tour,” he says. Legislative leaders crossed the state to meet with business and labor leaders and compile an economic plan. “We took it to small towns, large towns. We literally laid out a 22-point plan.”

Meanwhile, Schweitzer started running for governor virtually the day after he lost his race for the Senate. “For a year and a half,” he says, “I read all the newspapers in Montana, read the letters to the editor. When I read a cool letter, I would write them a letter and tell them that. So many candidates think that two weeks before the election, they’re somehow going to gin up people to write letters for them. We’d build relationships with people who already wrote letters rather than trying to get new people to write letters to the editor.”

He drove across the state, meeting people in rural areas and asking what they needed from government. Those discussions resulted in an agenda that included healthcare reform, economic development and a new approach to higher education with an increased emphasis on community colleges and technical schools. Schweitzer then took his new issue agenda and crossed the state again, giving speeches that never fell into wonk speak. Instead, Schweitzer ran on values, delivering a talk about his family homesteading in Montana, building a church and a community with their friends and neighbors. He talked about being a Bobcat (a graduate of Montana State). He talked about talking to people.

He continued fundraising at a fast clip, raising more than any other candidate for governor in Montana’s history, despite refusing PAC money–another decision he credited to talking to people. He toured the state to find a lieutenant governor. In the process, he talked to dozens of Montanans, people who rarely get one-on-one time with a major candidate for governor. Most of them, he says, told him that they did not want to be lieutenant governor, they simply wanted to talk to someone who could change things.

Ultimately, Schweitzer’s real choice for lieutenant governor made waves. When he tapped State Senator John Bohlinger, a Republican, the state GOP lashed out while Democrats around the state scratched their heads. Bohlinger is a progressively-minded Republican, a rare breed in national politics. In his hometown of Billings, Bohlinger was well known for his truly compassionate conservatism–delivering passionate speeches against the death penalty, hate crimes and sex trafficking. And while the decision raised hackles among some party stalwarts, the bipartisan ticket told many Montanans that this was a campaign uninterested in partisanship.

The Montana Kaimin, a daily college paper, editorialized that Schweitzer’s decision “shook up Montana’s all too partisan political infrastructure” and Chuck Johnson, the dean of Montana political journalism, referred to a TV ad emphasizing the bipartisan ticket as the most effective of the campaign year.

But Schweitzer’s team never confused common sense with mealy-mouthing or bipartisanship with timidity. In the waning days of the election, the Republican Governors Association (RGA) hammered Schweitzer with an ad accusing him of bogus business deals. “The RGA had already been kicked out of other states for deceptive advertising,” says Martin. “At the last minute, they ran an ad with a man who had tried to deceive money out of the Schweitzers, a wealthy landowner portraying herself as a destitute widow, and the cousin of the Republican nominee for Governor.” The three Montanans alleged bad business activity on Schweitzer’s part, but failed to disclose their own conflicts of interest.

The Montana Democrats hit back with an ad highlighting the fact that Schweitzer’s accusers had felony criminal records, as well as family and business connections to the Republican candidate for governor. The attack ad fell flat on its face.

“We got a lot of positive feedback on that,” Martin says. “Half of it was hitting home [Schweitzer’s] populist message and half of it was exposing these people for who they were.”

Ultimately, the hard work paid off. Schweitzer was elected as the first Democratic governor in 16 years. His approval rating is slowly marching upward, approaching 60 percent, while Bush has slumped to 53 percent approval in this red state.

But other lessons are more concrete and there are some signs that Democrats are beginning to implement them nationally:

If Democrats across the country learn these lessons, they’ll be on the right road to winning America back.

Matt Singer, Communications Director for the Progressive States Network, is a writer and activist in Montana.