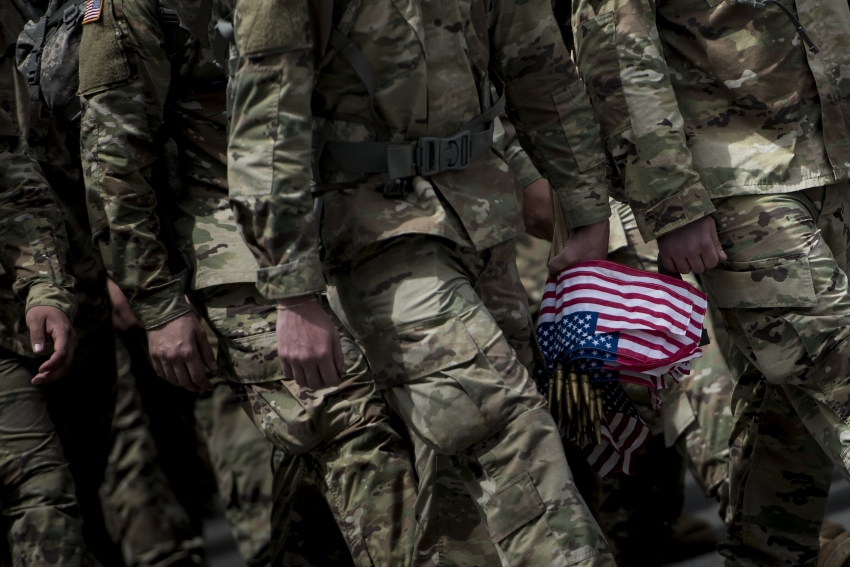 Soldiers in the Old Guard arrive to place flags at graves in Arlington National Cemetery during "Flags In" in preparation for Memorial Day May 25, 2017 in Arlington, Virginia. (BRENDAN SMIALOWSKI/AFP via Getty Images)

America’s addiction to war, by the numbers.

When it comes to fighting wars abroad, there seem to be unlimited funds; the question of how we’re going to pay for it is rarely asked. Since taking office, President Trump has passed one of the most expensive defense budgets in U.S. history. As the United States faces the most serious and immediate threat it has faced in decades, the defense budget should instead be redirected toward combating our public health emergency.

Over the past two weeks, nearly 10 million Americans have filed for unemployment, and Federal Reserve economists project that number may come close to 50 million in the coming months. In a country where medical care is tied to employment, those who have recently lost their jobs will likely join the ranks of the uninsured—a population that stood at 27 million before the COVID-19 crisis began. And there are signs that this crisis is already hitting low-income communities of color the hardest. Physicians on the front lines report that the distribution of testing sites and medical resources have shown familiar biases against low-income majority-black neighborhoods. In Milwaukee, where all eight of their first fatalities were African American, Wisconsin Governor Tony Evers has referred to medical discrimination in the midst of the pandemic as a “crisis within a crisis.” With the United States now leading the world in confirmed coronavirus cases, and facing projections of up to 240,000 deaths, the military budget is a striking indicator of how drastically we need to reorient our political priorities.

How many lives could we save and improve if we redirected our massive military spending towards meeting the needs of people trying to survive the COVID-19 crisis?

Indigo Olivier is an editorial intern at In These Times.