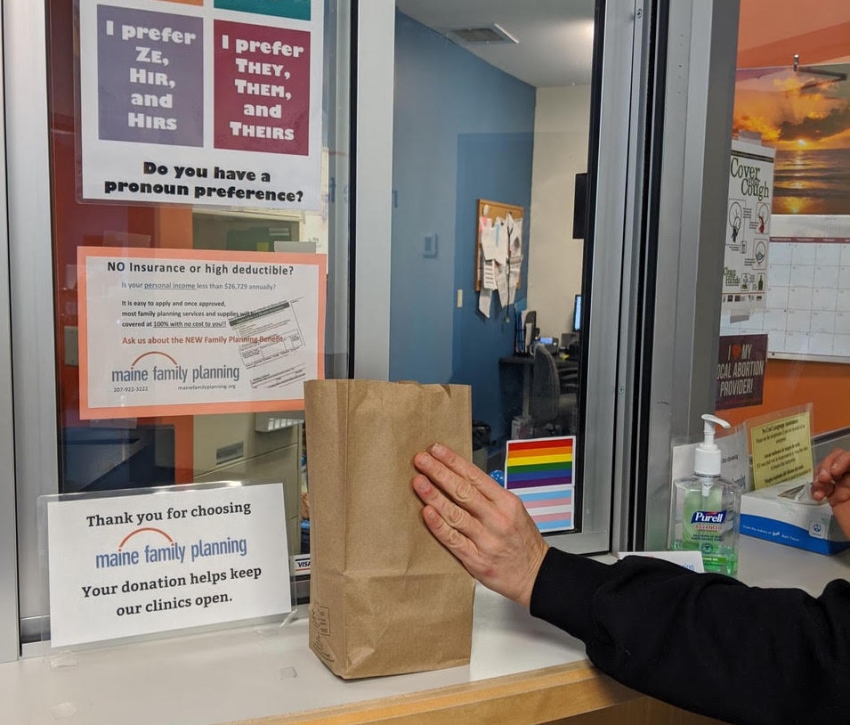 At the Augusta Family Planning clinic in Maine, patients can receive no-test abortions without interacting with others, by picking up a paper bag containing the abortion drugs and other necessary materials, detailed instructions and a 24/7 phone number. (Photo courtesy of Maine Family Planning)

“An Essential Procedure”: How Abortion Providers Are Persevering Through the Pandemic

In the face of Covid-19, clinics are continuing to provide safe abortions at a safe distance.

AUGUSTA, MAINE—“Do I have to worry about the virus there?” a patient asks Leah Coplon, program director at Maine Family Planning (MFP), while calling about having an abortion in April. “I’m really worried about the virus.”

Maine has been under a stay-at-home order since early April, similar to most states. Schools and many businesses are closed, and state residents are directed to only leave home for “essential” jobs and necessities such as food, medication and healthcare—which, for some, includes abortions.

Some politicians, including the Republican governors of Tennessee and Texas, have tried to restrict abortions during the coronavirus pandemic by claiming the procedures are nonessential, defying the advice of medical experts and provoking court battles. Some doctors are canceling routine exams to reduce virus transmission, but healthcare professionals like Coplon are adapting services to continue meeting urgent needs.

Since March 18, just days after officials announced Maine’s first COVID-19 case, MFP clinics have provided dozens of medication-induced abortions through a new no-test protocol. The protocol uses the standard drugs mifepristone and misoprostol to end pregnancies, but limits in-person contact by allowing patients to skip vaginal ultrasounds, pelvic exams and blood tests typically conducted before and after an abortion.

“Research and experience have demonstrated that these tests, which inherently involve physical contact between patient and healthcare worker, are usually unnecessary for safe and effective” medication abortions, according to an April article in the journal Contraception.

U.S. clinics generally test to confirm how far along in pregnancy patients are, but medication abortions without in-person supervision are not new. “Over the past 15 years, international organizations have provided mifepristone and misoprostol by mail to tens of thousands of patients screened only by history,” the article says, which Coplon co-authored with experts from Gynuity Health Projects, National Abortion Federation, Planned Parenthood and the University of California, San Francisco.

Patients are also using a telehealth platform to complete paperwork and talk with providers. For MFP’s no-test abortions, patients drop by a clinic’s entrance to pick up brown paper bags containing the abortion drugs and other necessary materials, detailed instructions and a 24/7 phone number. A medical assistant checks in by phone a week later.

Coplon tells In These Times that, although some states have counseling, testing and waiting period laws that could prevent clinics from fully replicating this model, providers may still be able to incorporate elements of it.

“What we’re finding is that most people seem really grateful to have this option,” Coplon says, “and most people are choosing it.”

Since not everyone can avoid procedures at the clinic during the pandemic, MFP has taken extra safety precautions for patients and staff at all of its 18 sites, including its Augusta location, where aspiration abortions (which involve suction) are still being offered.

Planned Parenthood of Northern New England’s health center in Portland, Maine—which offers medication and in-clinic abortions—has also taken steps to reduce face-to-face interaction. The organization is “maximizing the use of telehealth to ensure appropriate counseling,” a spokesperson tells In These Times.

Maine “is really helping to set the standard for the rest of the country,” says Carole Joffe, a professor of reproductive sciences at the University of California, San Francisco. Joffe is co-author of the book Obstacle Course: The Everyday Struggle to Get an Abortion in America.

“None of it would be possible if you didn’t have a Democratic governor,” Joffe adds, referring to Gov. Janet Mills, who has worked to expand abortion access in Maine.

Joffe is critical of some politicians’ attempts to label abortions as nonessential and their claims that new restrictions would help stop the virus while preserving the personal protective equipment (PPE) in short supply.

“It’s a very disingenuous, opportunistic argument,” Joffe says, pointing out that abortions are time-sensitive and require less PPE than many other medical procedures.

Joffe and Coplon note the pandemic is compelling some to seek abortions based on new health concerns, job losses and financial or familial constraints. Factors that can already make it harder to get an abortion—including childcare, time off work, the ability to travel and money—are being amplified and exacerbated.

“Every abortion that a person wants to have is an essential procedure,” Coplon says. “I’ve talked to lots of people in the past month who have wanted to have abortions and many of them have said to me … ‘I never pictured choosing to have an abortion. But right now this is the best decision for me.’ ”

Jessica Corbett, a former In These Times intern, is a Maine-based staff writer at Common Dreams. Follow her on Twitter at @corbett_jessica.