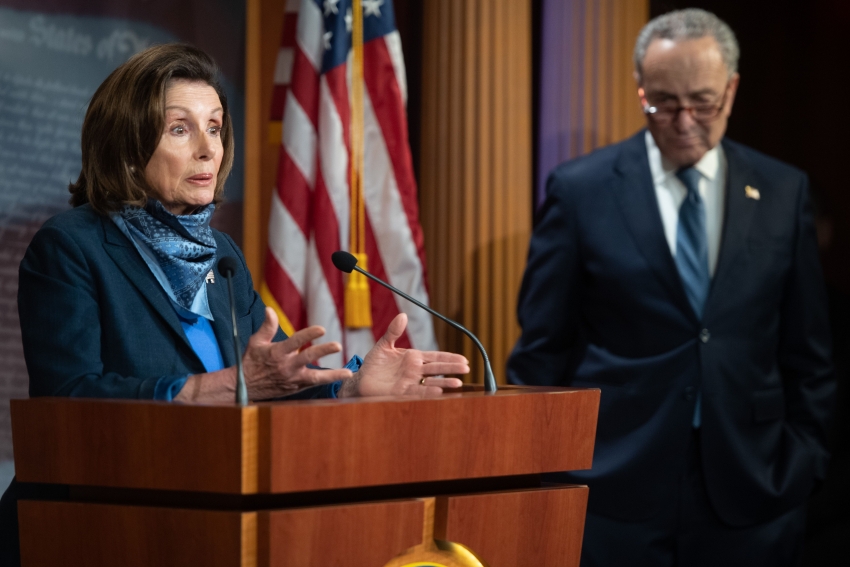 There is a direct line between Pelosi and Schumer’s failure to demand an immediate end to Trump’s war on Black people and their failure to oppose Trump’s wars around the world.

At a June 1 press conference, President Trump declared war against the Black-led uprisings taking place across the country by calling on the deployment of U.S. troops to American cities. “War”—a term typically reserved as metaphor or figure of speech—in this context increasingly appears to be a literal act taken by the President of the United States.

Trump said he would deploy the U.S. military to any city or state that “refuses to take the actions that are necessary to defend the life and property of their residents,” and he declared that he was dispatching “thousands and thousands of heavily armed soldiers, military personnel, and law enforcement officers” to Washington, DC. The remarks, delivered in front of a church where, moments ago, the streets had been violently cleared by the National Guard, sent a clear message to Trump’s white supremacist base that he plans to respond with brute—and potentially lethal—force to nationwide rebellions that were touched off by the killing of George Floyd, a black man, by Minneaolis police. His remarks followed Trump's May 28 tweet, in which he declared, “when the looting starts, the shooting starts,” which the ACLU said amounts to “directing the National Guard to murder protesters.”

This is a moment that calls for clear opposition and moral outrage. But instead, hours after this shocking speech, House Speaker Nancy Pelosi (Calif.) and Senate Minority Leader Chuck Schumer (N.Y.), the most powerful Democrats in the country, issued a mealy-mouthed, platitude-heavy statement that is worth reading in its entirety:

Across our country, Americans are protesting for an end to the pattern of racial injustice and brutality we saw most recently in the murder of George Floyd.

Yet, at a time when our country cries out for unification, this President is ripping it apart.  Tear-gassing peaceful protestors without provocation just so that the President could pose for photos outside a church dishonors every value that faith teaches us.

We call upon the President, law enforcement and all entrusted with responsibility to respect the dignity and rights of all Americans. Together, we must insist on the truth that America must do much more to live up to its promise: the promise of liberty and justice for all, which so many have sacrificed for – from Dr. King to John Lewis to peaceful protestors on the streets today.

At this challenging time, our nation needs real leadership. The President’s continued fanning of the flames of discord, bigotry and violence is cowardly, weak and dangerous.

Nowhere in this statement do Pelosi or Schumer say unequivocally that they oppose Trump’s threat to deploy the U.S. military against Black people in the United States. They give a name check to “racial injustice and brutality,” but they do not even name the police as the purveyors of this brutality. They say our country “cries out for unification,” but demonstrators aren’t calling for “unification,” whatever that means: They are angry and are forcefully demanding a change to a status quo that is killing Black people. By praising the “peaceful protesters on the streets today,” Pelosi and Schumer are implicitly creating a dichotomy between good and bad protesters for the purpose of criticizing the latter—a dichotomy that Trump himself has embraced and one central to the logic behind his military escalation.

But it’s what they didn’t mention that is most alarming. Nowhere do Pelosi and Schumer pledge that they will stop the military from enacting Trump’s apparent fever dream of a race war. Nowhere do they say that Democrats will fight to make sure that American armed forces aren’t killing people in the streets. Nowhere do they condemn the ongoing police crackdowns and collaborations with white militias, curfews or national guard deployments already terrorizing U.S. streets: all forms of collective punishment at exactly the moment Black Americans are demanding justice.

The closest either comes to an actual condemnation is a tweet thread from Schumer specifically condemning “federal officers” for firing tear gas on protesters in D.C. but only calling for an Inspector General to launch an “investigation into how the military is being used.” He goes on to declare, “The admin is using the military as a tool to intimidate citizens. Sec. Esper & General Milley should not allow the US Armed Forces to come anywhere near these ugly stunts.” Schumer's wording is ambiguous, and it is not immediately clear whether he is saying Trump should not deploy the military. In the very next line, he merely calls for an investigation: “The Department of Defense Inspector General must launch an investigation into how the military is being used.”

However ambiguous Schumer's wording may be, Pelosi's further remarks were outright baffling. In a follow-up presser, Pelosi held up a bible in response to Trump doing the same, rambling about Trump having “the responsibility to heal.” Again, she offers no specific proposals to meet the demands of the Black Lives Matter movement—or even to oppose Trump’s call for military occupation of American cities.

While Trump has escalated and emboldened the police who overwhelmingly support him, it’s important to note that the Black Lives Matter movement began under a Demcoratic president, Barack Obama, and its major early uprisings—from Ferguson to Baltimore to Minneapolis—happened under Democratic mayors and Democratic-appointed police chiefs. Democrats have had a chance since Black Lives Matter began in earnest in August of 2014 to be the party of the movement—to demand the defunding of police and slashing of prison populations, and to call for long overdue reparations for Black Americans. But instead, what Democratic leadership has offered is a series of never-ending exploratory committees, toothless DOJ investigations, photo-ops, platitudes about “healing” and “unity” and half measures like increased training (which does nothing more than give more money to the police and is often administered by abusers themselves) and deploying body cameras (which have not stamped out the scourge of police violence.)

Imagine if Demcoratic Party leadership announced a bold plan for Black America reflecting the real demands of the Black Lives Matter movement: meaningfully diviesting from police and prisons and redirecting resources into social programs for black communities; undermining police power rather than continuing to fund it alongside cosmetic “reforms.”

There is a direct line between Pelosi and Schumer’s failure to demand an immediate end to Trump’s war on Black people and their failure to oppose Trump’s wars around the world. Pelosi and Schumer have voted in favor of every single mammoth war budget under Trump, and have consistently failed to muster a real opposition to the many horrific wars he is waging around the world. From Yemen to Afghanistan to Venezuela to Trump’s escalation towards the Palestinians, Democratic leadership has consistently either aided or ignored Trump’s belocosity. Pelosi has spent the past few months partnering with GOP Senate leader Mitch McConnell to take on progressives in her own party to expand Patriot Act surveillance powers for Trump. It’s predictable then, that when the President turns his imperial bludgeon on his own—effectively occupied—Black population, they are equally useless.

Trump’s racist rhetoric and appeals to martial law are a radical escalation, and need to be met with a forceful response. He has given the green light to white militias, police and military forces to violently menace the streets. This country desperately needs a real opposition party—one that can read the urgency of the moment and respond with concrete policy proposals and unequivocal support for Black lives, not more squishy rhetoric about “unity” and “healing” but actionable, meaningful plans for meeting the demands of those crying out on the streets of American cities.

Sarah Lazare is web editor at In These Times. Adam Johnson is the co-host of Citations Needed podcast and a writer at the Appeal.