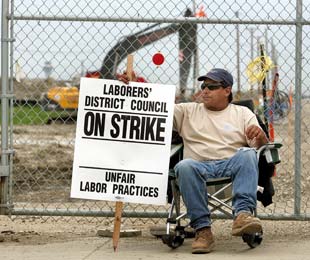 Has the Change Led to Wins?

Not yet, but organizers from the seven unions that split from the AFL-CIO have big plans.

When a bloc of unions broke away from the AFL-CIO two years ago to form the Change to Win labor federation, their leaders appeared to have lit a fuse on a bomb–but nobody knew what kind. Would the already weak labor movement blow up amidst debilitating fragmentation and squabbles? Or would the explosion unleash a new organizing fervor?

Two years later, the fuse is still burning. But two things are clear. Despite lingering rivalry, the two federations and their affiliated unions are working together surprisingly well, most obviously on politics. Divisions–old and new, between and within the two federations–flourish, as they did before the split. But at the local level, they want to work together.

And despite Change to Win’s argument that it split from the AFL-CIO to organize on a vast new scale, the labor movement has continued to organize at the same rate, with the same unions showing the greatest success.

From 2004 to 2006, net membership increased slightly for the 10 million-member AFL-CIO unions and declined slightly for the six million-member Change to Win unions, which includes the Service Employees International Union (SEIU) and UNITE HERE! (hotel, apparel and service sector workers), the only two affiliates to grow, as well as the Teamsters, United Food and Commercial Workers (UFCW), Laborers, Carpenters, and United Farm Workers.

Some of the Change to Win unions like the Teamsters, Laborers, and UFCW, which had not been organizing effectively, say they have made ambitious alterations in how they operate. And last year within the AFL-CIO, six unions announced they were increasing their annual organizing budgets by a total of $150 million.

Those changes could pay off if the political and legal environments shift. A new pro-labor Democratic president and Congress would likely enact the Employee Free Choice Act, making it easier to form unions when a majority of workers sign union membership cards.

Ironically, when they split, Change to Win leaders criticized the AFL-CIO for spending too much on politics. Both sides now agree that unions must use political clout to help organizing efforts.

“I can’t argue with the numbers,” says Joe Hansen, president of UFCW. “If I didn’t think we’d significantly changed UFCW, I’d say that we’d made a mistake. But we have [changed], and a lot of that is due to Change to Win. We haven’t had immediate success and I can’t say how fast that will come.” But Hansen hopes UFCW, which currently has around 1.3 million members, will organize 2 million more workers in the next decade, starting with organizing drives at regional supermarket chains and in packinghouses.

Change to Win still sees explosive growth on labor’s horizon. At the federation’s second convention, held in Chicago in late September, SEIU President Andy Stern reminded delegates that the labor movement grew by 1 million members a year for five years after Congress passed the National Labor Relations Act in 1935, tripling the share of the workforce in unions. “We’re at the beginning of another historic moment,” he told delegates. “We have changed our unions. If we pass the Employee Free Choice Act, these unions will grow by 1.5 million members a year, not just for five years but for 10 to 15 straight years.”

Yet, so far, recruitment results have not been dramatic.

“Did the split cause changes?” asks Cornell University labor studies Professor Kate Bronfenbrenner. “I think Change to Win has been good for the Teamsters, UFCW and Laborers’ International Union of North America. Has it been good for the labor movement as a whole? No. It hasn’t hurt the labor movement, but it hasn’t been good. Without a common vision, you’re not going to change. When the CIO formed, it stood for something. It was a movement. This isn’t a movement.”

But Change to Win does have a strategy, and it partly reflects their argument during the split that unions should concentrate on large-scale organizing of their core industries. “We said there are these 50 million workers…[in] jobs that are overwhelmingly low paid, and only six million of the 50 million are organized,” says Tom Woodruff, the SEIU vice-president who directs the Strategic Organizing Center, which helps unions develop better organizing strategies and coordinates a few of its own organizing efforts. “The obvious purpose to organize is to create a chance for the new American Dream, a middle-class life. Manufacturing and auto used to be the worst jobs, and workers organized and made them the best.”

SEIU and UNITE HERE! have long used such strategic, comprehensive approaches, as have AFL-CIO unions like the Communications Workers.

Today, all seven Change to Win unions have annual growth plans in their key industries and, as a group, they review each union’s progress more rigorously than they did when they were a part of the AFL-CIO. “All of the unions have better staff, research departments, much more sophistication in developed campaigns designed to win,” says Woodruff.

The seven union presidents and three other Change to Win officials are part of a leadership group, chaired by Anna Burger of SEIU, that meets monthly. Change to Win itself is small–only about 35 employees–and three-fourths of its $16 million budget goes to the Strategic Organizing Center. In addition, some of the affiliated unions loan staff for long-term work with Change to Win. Rather than operating as a traditional, centralized organization, Change to Win sees itself as a coalition that puts decision-making in the hands of affiliate leaders and leaves much work, like policy research and lobbying, to individual unions.

Change to Win unions may have agreed on overall strategy, but differences between member unions still exist.