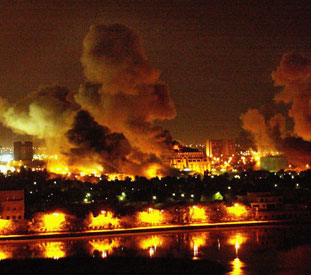 First come the bombs, then come the neoliberal economists

The New Road to Serfdom

Over the course of 500 pages in The Shock Doctrine, Naomi Klein documents the moments of chaos and disruption that allow a small coterie of experts to swoop in and administer what’s invariably called “bitter medicine,” “painful reforms” or “shock therapy”

In the early ’80s, as Margaret Thatcher attempted to hack away at England’s substantial public sector, she found a frustrating degree of public resistance. The closer she got to the bone, the more the patient wriggled and withdrew. Thatcher doggedly persisted, yet her pace wasn’t fast enough for right-wing Austrian economist Friedrich von Hayek, her idol and ideological mentor. You see, in 1981, Hayek had traveled to Gen. Augusto Pinochet’s Chile, where, under the barbed restraints of dictatorship and with the guidance of University of Chicago-trained economists, Pinochet had gouged out nearly every vestige of the public sector, privatizing everything from utilities to the Chilean state pension program. Hayek returned gushing, and wrote Thatcher, urging her to follow Chile’s aggressive model more faithfully.

In her reply, Thatcher explained tersely that “in Britain, with our democratic institutions and the need for a higher degree of consent, some of the measures adopted in Chile are quite unacceptable. Our reform must be in line with our traditions and our Constitution. At times, the process may seem painfully slow.”

The Hayek/Thatcher exchange is one of many revealing historical nuggets unearthed in The Shock Doctrine: The Rise of Disaster Capitalism, Naomi Klein’s ambitious history of neoliberalism. Hayek isn’t the star of The Shock Doctrine–that dubious honor goes to his protegé and fellow Nobel Laureate Milton Friedman. But Klein’s totemic, capacious and brilliant alternate history of the last three decades of global political economy can best be understood as a latter-day response to Hayek’s classic right-wing manifesto, The Road to Serfdom.

Written in exile, while Europe burned, The Road to Serfdom’s simple but powerful thesis was that the encroachment of the state into economic affairs inevitably leads to an encroachment in all spheres. For Hayek and his intellectual descendants–from Friedman (Milton) to Friedman (Thomas)–political freedom and economic freedom were inseparable and mutually reinforcing. And over the last 30 years, the adherents of the Friedman/Hayek School have pointed to two coincidental trends in global political economy to back this grand claim: First, the fall of command-and-control economies and the dismantling of welfare states. The second, the rise of democratic governance. With cunning aplomb, neoliberal writers and historians have packaged these two distinct phenomena together as one single story of progress and development. Look: Freedom’s on the march!

Klein resurrects Hayek’s argument and inverts it, showing how time and again, the “economic freedom” envisioned by Hayek and his ilk has been imposed at the expense of political freedom, often, Klein writes, “midwifed by the most brutal forms of coercion.” From Chile to Iraq, majorities empowered to choose their own government don’t start clamoring for flat taxes, privatized post offices and an end to controls on foreign capital. Instead, they often form unions or call for increased social spending. The Shock Doctrine is an encyclopedic catalog of the tactics that governments, corporations and economists have used to impose– usually over popular opposition–what Klein calls the “policy trinity” of the Chicago-School program: “the elimination of the public sphere, total liberation for corporations and skeletal social spending.”

Over the course of 500 pages, Klein documents the moments of chaos and disruption that allow a small coterie of experts to swoop in and administer what’s invariably called “bitter medicine,” “painful reforms” or “shock therapy.” “Only crisis,” she quotes Milton Friedman as once observing, “actual or perceived, produces real change.” While Klein calls this the “shock doctrine,” I prefer a phrase she quotes from former World Bank Chief Economist Joseph Stiglitz, who called those who imposed free-market “shock therapy” on Russia in the early ’90s “market Bolsheviks.” Like Lenin, these economic policy-makers saw opportunity in crisis, and were skeptical, even contemptuous of democratic pieties. They were convinced that only an enlightened vanguard would be able to take the painful, sometimes bloody steps necessary to bring about revolution. The most extreme of them also shared with Lenin the impulse to start anew, to wipe out history, to work off a blank slate. They held the perverse belief that a proposal’s ideological purity is directly proportional to the pain and disruption it causes.

Klein’s history begins in Chile in 1973 and ends in Sri Lanka after the 2005 tsunami. Some of the material–like the grisly details of the ’70s South American dictatorships’ dirty wars on unionists, dissidents and leftists–will be familiar to lefty readers. But even on familiar terrain, Klein has a remarkable eye for the revealing detail or the telling quote. She points out that during Argentina’s military dictatorship in the late ’70s and early ’80s, the Galerias Pacifico mall, “the crown jewel of Buenos Aires’ shopping district,” contained a basement torture center where detainees had scratched pleas for help into the wall. “For Argentines who know their history,” she writes, “the mall stands as a chilling reminder that … the Chicago School Project was quite literally built on the secret torture camps where thousands of people who believed in a different country disappeared.”

If the “shock doctrine” was born amid violence and repression in South America, and then developed less openly repressive means of influence–such as through the International Monetary Fund’s structural adjustment programs in developing countries–Klein argues it has now reached a kind of final frontier. Having snatched the low hanging fruit, it has in its sights the Middle East’s oil-dominated state economies and the developed world’s last remaining un-privatized functions: fighting wars and providing security.

In Iraq, the dangers of these two projects have come together and been made most horribly manifest. Paul Bremer, the former U.S. administrator to Iraq, issued orders immediately privatizing the state’s factories, dismissing the state bureaucracy (including, but not limited to the Army) and imposing a flat tax, all while putting down spontaneous expressions of democracy and protest that had broken out across the newly “liberated” country.

Meanwhile, as mercenaries ran roughshod, the privatization of war produced perverse incentives for the corporations that benefited from the chaos. Amid the increasing chaos, a gutted public sector struggled to implement its vision for a new Iraq through layers of subcontractors. (Klein notes that in Germany, after reunification, a staff of 8,000 government workers oversaw the privatization of the state’s vast holdings. In Iraq, that number was three.) “In short,” she writes, “the [Coalition Provisional Authority] was itself too privatized to privatize Iraq.”

The sole achievement of the U.S. occupation thus far has been the transfer of billions of dollars of public money into the private coffers of those companies that managed to get their hands on lucrative government contracts. This, to Klein’s mind, is the whole raison d’etre behind the “corporatist state.”

But Iraq is complicated. Klein gives a persuasive account of why the insurgency emerged when it did. However, no single interpretative framework seems up to the task of fully ordering and untangling the various combustible worldviews now fighting it out in Iraq.

This raises the central flaw in The Shock Doctrine: The structure of her argument requires her to whittle down some events in order to make them fit, in the process shedding their multifaceted and culturally specific influences and rationales. This tendency is exacerbated by the book’s title and the animating metaphor introduced in the opening chapter. In it, Klein describes a series of horrifying CIA-funded experiments undertaken by a sadistic Canadian doctor in the ’50s. Subjects were shocked, against their will, into states of highly suggestible infantilism, and the results were enshrined in the CIA’s so-called “Kubark” manual, which Klein alleges has become a handbook for American interrogators during the war on terror. The chapter is chilling. But once the book moves into documenting the full spectrum of anti-democratic strategies employed by neoliberalism’s proponents, the potency of the metaphor dissipates. “Shock” describes everything from the actual shock of electric volts used against disappeared leftists in Chile and Argentina to the metaphorical shock of the transition from communism in Russia and Eastern Europe. Even the fairly routine political capital Thatcher accrued in the wake of England’s victory in the Falklands War is a shock.

The problem is, the more Klein’s concept of “shock” accounts for, the less it explains. In South Africa, for example, Klein interviews African National Congress (ANC) leaders to find out how their once socialist, anti-apartheid movement later became a neoliberal government. She finds that, basically, they got hustled. During initial negotiations over the transfer of power, business interests and international financial institutions extracted seemingly innocuous and technical concessions that constitutionally restricted the ANC government from following through on its popular, social democratic promises. That’s a revealing anecdote of the anti-democratic sophistication of the vanguard of global capital, but it’s a long way from torture chambers and electric volts.

If The Shock Doctrine overreaches at times, its central contention is spot on. The force and permanence of a book like this can change outlooks and systems. Just ask the generations of thinkers who’ve been influenced by The Road to Serfdom. That book may be massively over-simplified and tendentious, but Hayek’s strong arguments–along with the repeated bloodshed and tyranny of so many communist governments around the world–helped force the anti-democratic left and its sympathizers to take a hard look in the mirror. At a certain point, it became impossible to continue to excuse purges, starvation and gulags as some kind of unfortunate distortion of their true vision.

My hope is that Klein’s book can do the same for the many partisans of Friedman-style economic policy, who have convinced themselves that their utopian vision is beautiful even if its implementers have been ugly. Klein has dragged out the bodies and plastered the self-incriminating memos for all to see. If her argument can become as prominent in the next 50 years as Hayek’s was over the previous half century, the world will be a better place.