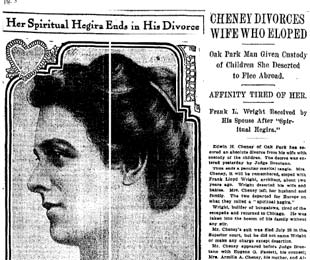 If Nancy Horan had presented the ending of her novel, Loving Frank (Ballantine), in a workshop, or if perhaps she’d stricken the historical names and pawned this as pure invention, it would have likely been considered an excellent example of deus ex machina. “Oh, please,” the reader would say. “You’re going to create these fascinating, complex characters, fill reams with exquisite period detail and reflections on architecture and feminism, increase the tension to such an incredible degree … and then … this?”

But life tends to defy the conventions of literature and art, to sometimes embrace the illogical, the impossible, the too obvious. And so Loving Frank–which is, paradoxically enough, an elegant and sober work–cannot end neatly.

Horan’s work is a novel, but it is the story of two real lives: Frank Lloyd Wright’s and Mamah Borthwick Cheney’s. And though Horan takes great liberty in imagining intimate scenes between the two–of which there is no evidence–Loving Frank ultimately rests on historical record. The ending–which I won’t spoil–is horrific because it was horrific. It’s senseless because, yes, it was senseless.

In 1903, Mamah was a teacher and translator with far greater intellectual gifts than her role as housewife could satisfy. It was her husband, Ed Cheney, who hired Wright to design a new home for them in Oak Park, Ill., where architecture’s enfant terrible also then resided. During the construction of the house, Wright and Mamah shared a great deal of time together (Ed was at work so she oversaw the project) and eventually the two fell in love. It takes a couple of years to consummate that attraction, but Horan doesn’t withhold–or delay–that information. The tension she builds, however, is less titillating and much more powerful. How do two married people with children deal with such a thing at a time when divorce is an alien concept?

But the real meat of the story is how far two people are willing to go, not just for love, but for a love of equals. Horan proposes that an intellectual ardor, a meeting of the minds as much as of souls is what really bound Wright and Mamah. Wright may have been a world-renowned genius but she was no slouch. A translator and promoter of feminist ideals, Mamah ignores his arrogance and rationalizes his rudeness (and the reader gets the feeling that Horan does, too).

But where the two most engage and match is in their talk about art and nature. Fortunately, Horan doesn’t let it get too out there. Mostly, she paraphrases these conversations, but we get the idea from what snippets she imagines for us:

“Nature is everything to the Japanese,” he said. “When they build a house, they face it toward the garden.”

“I knew Japan had influenced you,” she said. “I didn’t realize how much.” She thought she saw him flinch. “You don’t like the word ‘influenced,’ do you?”

“Don’t be sorry. But I want you to understand. Nobody’s influenced me. Why should I copy the Japanese or the Aztecs or anybody else when I can make something beautiful of my own? It all comes from here.” He tapped a finger on one temple. “And from nature.”

Horan is faithful to the historical record, but let’s be clear about what that means. Although, during his life, Wright wrote an autobiography and many books about architecture, he barely mentioned Mamah. Historians–and even descendants of his Oak Park neighbors–respected his near silence. Mamah was a badly kept secret, but before Horan, the image of her was blurry.

What Horan is most loyal to is the historical period and the strict outline of Wright’s and Mamah’s lives. Her research included newspapers and other publications–Wright and Mamah were pursued by what might be comparable to today’s paparazzi–and the works of others, including at least one master’s thesis that focused on Mamah’s influence–oh, that word!–on Wright’s architecture. But from what Horan explains in an afterword, she gained a true sense of Mamah from 10 letters she wrote to Ellen Key, a Swedish feminist for whom Mamah did some translations.

In an age when news organizations take liberties with facts, it’s oddly comforting that a novel–a work of fiction, no less–takes pains to unearth historical reality. And when those facts interrupt our literary expectations, it can shake us up in unexpected ways.

It also means that when Horan pauses to imagine, we instinctively believe her. Yes, it’s a matter of faith, but this, after all, is a love story, and few things in life require more faith than love.