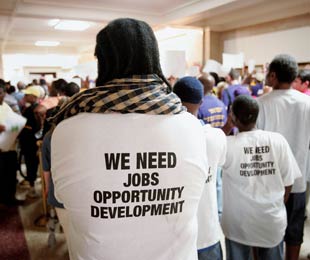 Where is the Dream?

Since the war in Iraq began almost five years ago, Chicago has been the site of some of the most robust and raucous antiwar agitation in the country. But a persistent racial chasm undermines these efforts. Black participation in marches is depressingly low and the antiwar movement’s leadership is predominantly white.

A handful of progressive black politicians, clergy or community leaders show up at antiwar rallies to speak, but the black masses are conspicuously absent. The lack of black voices in the peace movement is particularly dissonant because the community overwhelmingly opposes the Iraq War. According to the Boston Globe, at the start of the war in 2003, only 19 percent of blacks supported it. Now an astounding 90 percent oppose this misadventure, according to a BET poll.

White organizers often self-flagellate for not doing enough to “reach out” to the black community, and many antiwar activists focus on the role of white racism in discouraging black participation. However, this focus prevents an overdue discussion of a significant development in post-Civil Rights black leadership–namely, the flight of many black leaders from the progressive agenda of the Civil Rights era. This retreat, facilitated by politically and morally suspect relationships with corporate benefactors, is implicated in black demobilization not only around the Iraq War, but in other aspects of black social, economic and political life.

An example of this retreat can be seen in the role of black leadership in Chicago’s recent fight for a living-wage law. In this low-wage economy, many African Americans must hold multiple jobs to make ends meet. One remedy for this is to establish a living wage, a move that has taken root in major cities across the country, including San Francisco, Los Angeles, Boston and Santa Fe, N.M. But taking on predatory low-wage employers requires bold, progressive leadership.

In November 2003, when Wal-Mart launched its “urban initiative” to set up stores in major cities, it increased financial contributions to key black institutions and leaders.

In 2006, Wal-Mart’s contributions to the black community included a $1 million grant to the Congressional Black Caucus Foundation; a $5 million grant to the National Urban League; and $1.5 million to the United Negro College Fund. Wal-Mart’s goal was to presumably enter the market unencumbered by standards of accountability, particularly living-wage laws that community organizations and unions pushed for. As Wal-Mart money poured in, many black leaders either took up the big-box corporation’s cause or were conspicuously absent from the living-wage struggle.

Until August 2006, Andrew Young, a former civil rights leader and U.N ambassador, served as a million-dollar spokesperson for Wal-Mart. His mission was to rally black leaders to block living-wage bills. In Chicago, he did this by hosting a lavish “clergy luncheon” to help enlist black ministers to Wal-Mart’s side. On July 20, 2006, one South Side black pastor turned out 1,000 community members to rally against a City Council living-wage bill.

Dorothy Tillman, a City Council member and reparations leader, also opposed the ordinance and attacked the “racist unions” that supported it. Never mind that 10,000 Chicago workers–mostly black and Latino–would have benefited from the pay hike. And never mind that thousands of black workers are union members. In Illinois, the SEIU has more black members than any of the state’s civil rights organizations, including Rainbow/PUSH Coalition and NAACP.

What’s more, for reparations activists, supporting such corporations seemed a strange position. How could they reconcile the pursuit of racial justice with the defense of a wealthy, Southern corporation that has profited from low-wage labor?

The Chicago Tribune ran 12 editorials between 2005 and 2006 opposing Chicago’s living-wage bill, and the Chicago Sun-Times ran eight, one of which declared, “The activists are the enemy.”

Despite a divided black leadership, the City Council passed the ordinance overwhelmingly in favor of a living wage, but Mayor Richard Daley vetoed it. When he announced the veto, Daley flanked himself with several black ministers, a move that reflected the anti-living-wage campaign’s effort to align its cause with black interests. In fact, Daley portrayed his veto as a move to strengthen black communities.

But, there would be more bad news for Chicago’s low-wage workers. As the living wage struggle wound down, Commonwealth Edison, the local utility company, was lobbying the state legislature to end a rate freeze that had protected Illinois consumers for 10 years. The Citizens Utility Board, Illinois’ consumer watchdog, and the office of Illinois Lieutenant Governor produced studies showing that such action would result in a 25 to 55 percent rate increase. They also cited data showing that ComEd parent company Exelon is now the most profitable electric utility in the nation, and called for extending the freeze for another three years.

Not long after Mayor Daley’s veto of the living wage bill, a group calling itself Consumers Organized for Reliable Energy (CORE) began running television ads supporting Commonwealth Edison’s rate hike and warning of electricity shortages and rolling blackouts if the rate hike was not approved. An investigation by a local television station revealed that CORE was a front group funded by ComEd. It turns out that CORE was composed of many of the same black leaders who had opposed the living wage. For the workers, it was double jeopardy. Having been denied a living wage, they now faced a steep utility rate hike, sadly at the hands of people who claim to be their leaders.

The final blow for workers came in October 2007 when Mayor Daley won a $300 million tax hike. After depriving workers of a living wage, he imposed on them a heavy property tax and a series of fee and fine hikes. With a few exceptions, black leadership was relatively silent. If Daley had not vetoed the living wage bill, 10,000 workers would now be earning $10 per hour and contributing substantially to city coffers. How could the mayor of a big city burdened with inequality and social instability–a Democrat at that–choose to protect wealthy corporations rather than take action that would help struggling workers and actually improve the city’s tax base at the same time? Equally troubling is that leaders of the city’s most marginalized communities were complicit in setting up this atmosphere of impunity for the mayor and his big business allies.

Unfortunately, this story reflects a broader shift in Chicago’s black leadership. Apart from a committed core of progressive African-American leaders who have maintained visible opposition to the war, mainstream black leaders have been quiet. Among the leaders who so vigorously opposed the living wage ordinance, only one, the Rev. Leon Finney, has shown up at an antiwar protest.

One problem is that many black community leaders are embroiled in social and economic battles, ones exacerbated by the war itself. As a labor and community activist, I have encouraged many African-American community leaders to attend war protests. In one exchange, a leader of a South Side community organization assured me that “all black folk I know oppose this ridiculous war.” But she complained that she could not bring people to antiwar marches because “our HUD (Housing and Urban Development) money was cut.” The loss of federal funds necessitated staff cuts that affected her group’s ability to mobilize its members. When I suggested that HUD, like other non-war-related agencies, had been targeted for cuts because of the war, she was taken aback. This exchange reminded me that the black community needs more leaders to articulate the relationship between military spending and domestic programs.

Wars at home and abroad

The alignment of many in Chicago’s black leadership with corporations has had serious implications for political mobilization. It is a universal–and understandable–truth that political participation rises with income. As a result, the defeat of the living wage has diminished the political voice of many black workers and all low-wage workers.