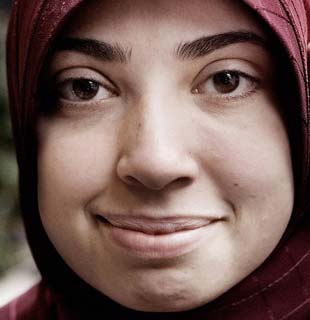 Asmaa Abdol-Hamid lost her bid for parliament last year after the right-wing Danish People's Party targeted her for refusing to remove her hijab or shake hands with men.

In early 2006, violence across the Islamic world rocked the quaint Scandinavian country of Denmark after one of its major newspapers, Jyllands-Posten, published inflammatory cartoons of the Prophet Muhammad months earlier. The images enraged many Muslims, some of whom burned Danish flags and embassies to protest the caricatures of their prophet, which Islam forbids from being depicted at all.

One of the 12 caricatures of Muhammad depicted a man with a bomb under his turban–a move presumably designed to provoke debate about Islam’s relationship with the West.

Few understand this clash of cultures as well as Asmaa Abdol-Hamid, a Danish immigrant born in the United Arab Emirates to Palestinian parents. The 26-year-old social worker from Odense (the city where writer Hans Christian Anderson was born) ran for parliament last year with the leftist Red-Green Alliance party, but came up short after the right-wing Danish People’s Party launched a smear campaign against her. The reason? Abdol-Hamid wears a hijab and she chooses not to shake hands with men–even in parliament.

Denmark is home to 5.4 million people, nearly 200,000 of whom are first- or second-generation Muslim immigrants. Though Denmark prides itself as a tolerant and open nation–with a welfare state, socialized medicine and once welcoming immigration policies–many of the country’s religious minorities see things differently.

In These Times spoke with Asmaa Abdol-Hamid just days after the infamous caricatures were reprinted in more than a dozen Danish newspapers, following reports of renewed death threats against the illustrator of the bomb-in-the-turban cartoon, Kurt Vestergaard.

What are the biggest challenges that minorities face in Denmark today?

The biggest challenge for Danish Muslims is to be viewed as equal citizens. What I experienced following the cartoon crisis and the worldwide reactions to them is that young Muslims in Denmark are afraid something awful will happen to them. They are just waiting for their turn, and that’s truly scary.

But Muslims in Denmark are Danish citizens. They will live here for the rest of their lives and raise their children here. We have to teach people that they are equal.

Too many people believe that you can’t be a Dane and a Muslim at the same time, especially the Danish People’s Party. But today, many Danes are connected to Islam. Their religion isn’t a barrier to them being good citizens in the Danish community. So we have to view Denmark today in a different light.

The policies promoted by the People’s Party clearly perpetuate a genuine ignorance about Muslims in Denmark. It’s a dangerous development.

How about your own religious faith as a Danish Muslim woman?

My mother brought my five sisters and brother and me to Denmark from the United Arab Emirates. My father came later. We lived in a town called Genner, on the rural Danish mainland, where we were the only Muslims in town.

I am religious. The more I learn about Islam, the easier I find it to be a citizen of Denmark, because many of the values are shared. Danish values stem from, or are inspired by, Christian values. Many of those values are universal. Freedom of expression and freedom of religion are representative of democratic societies but are also representative of Islam. They merge. I think it’s actually easier to be a Muslim in Denmark than it is to be a Muslim in other places, such as the Middle East.

Many think of you as the politician who won’t take off her hijab or shake hands with men in parliament. What’s your response to that?

I do greet men, but I do it with my hand on my heart. I do it in a manner that shows them honesty and respect.

When I met Morten Messerschmidt, an incumbent member of the Danish People’s Party, for a televised debate, he waited until we were on the air before he extended his hand toward me, saying he wanted to shake my hand, even though he knew I wouldn’t do it. I told him that I would greet him with my hand on my heart to show him honesty and respect. You do the same to me, I told him. But he just walked out the door.

What’s important is not how we greet each other, but the values we emphasize when we meet.

As to whether I’d take off my hijab, it’s my personal choice not to. It’s my freedom as a woman to wear it, and I won’t let myself be intimidated by the right-wing politicians in Denmark–or by primitive men from my own background.

I am a free woman who has the right to decide over my own body and my own clothing. I have decided to wear a hijab, and in a free democratic society, that choice ought to be respected.

Why didn’t you win enough votes to gain a seat in parliament last fall?

When I was asked to run for a parliamentary seat by the Red-Green Alliance party, I accepted because I have many social and political ambitions for Denmark. When I campaign politically, I forget that I’m wearing a hijab. That doesn’t define who I am; it’s just a part of my clothing.

But the way I dress was met with resistance, and I was asked if I would continue to wear the hijab if I entered parliament. My answer was, “Of course I will.”

On the campaign trail I was asked about my religion and about Muslims in general. Those questions showed me what kind of situation we have in Denmark. When we question those campaigning for parliament on their religion, that reflects a dangerous polarity in a democracy. Democracy is for all people.

Suddenly, there were parliamentary officials in Denmark who wanted me to withdraw from the democratic process because I wear a hijab. That only convinced me to insist on my rights as a citizen and to continue my bid for parliament.

What about the diversity of voters who supported you: radicals, gays, minorities?

The broad group that has supported me has been interesting: citizens from different classes that support my politics, citizens that care about Denmark, citizens that want to resist [Danish People’s Party leader] Pia Kjaersgaard and her party.

They included the Red-Green Alliance party class in Copenhagen, as well as many first-time voters–people who have lived in Denmark for many years but never voted in a parliamentary election. I am really happy about that and grateful for their support.

Those who favored my candidacy didn’t focus on my religion but on my politics.

You allied yourself with the gay rights movement and enjoyed their support. That would be unthinkable for many devout Christian politicians in the United States.

People’s sexual orientation is not important to me. I don’t want to enter people’s bedrooms and see whom they’re sleeping with. It’s not my right as a politician or as a Muslim. I can’t judge people. As far as I’m concerned, the only one who can judge people is God.

The Danish left has traditionally focused on class politics and international solidarity, but minority rights have taken a back seat. Is the Danish left now ready for you?

Actually, liberal parties in Denmark have strayed from class wars, and that’s what I want us to focus on again. Denmark is one of the richest countries in the world, with an established wealthy class, and yet we’re talking about poverty here … in 2008! That’s deeply worrisome.

The ethnic minorities in Denmark now belong to the lower class. They are the new working class for the liberal parties–immigrants who we need to integrate into liberal politics. It’s our responsibility to fight for them.

Before the Muhammad cartoons were recently re-published, another Danish politician of Middle Eastern descent, Naser Khader, said that the reaction would be different this time around. What do you think?

I’m getting pretty tired of the cartoon case, to be honest. It’s all so unnecessary. If there were threats against Kurt Vestergaard, the primary cartoonist, then those people should see their day in court. But one shouldn’t react by punishing all Muslims.

We need to draw the line between freedom of the press and persecution. There’s no journalistic rationale for reprinting the cartoons other than a show of solidarity for Vestergaard. It’s fine to sympathize with him, but there are other ways to do it.

It’s the job of newspapers to print stories, not to teach a lesson to certain groups of people. If my little sister came home from school and said she had picked on the fat girl in class, I wouldn’t commend her for using “freedom of expression.”

I don’t think it was a good idea to republish the cartoons. It’s harmful to the Muslim community that we are acting like children in school who resort to a playground mentality.

And it’s just not smart for Denmark, given our participation in the war in Iraq and the earlier cartoon crisis.

Now we’re doing it again, and casting Denmark in a questionable light, internationally, in the process.