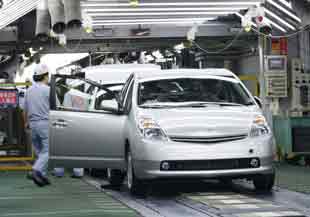 The Dark Side of the Toyota Prius

In its 65-page report released in June, NLC includes first-hand testimony of factory conditions in “Toyota City,” outside of Nagoya, Japan – less than 200 miles southwest of Tokyo – where the largest auto company in the world employs some 70,000 people.

The report alleges that Toyota exploits guest workers, mostly shipped in from China and Vietnam. According to the NLC, these workers are “stripped of their passports and often forced to work – including at subcontract plants supplying Toyota – 16 hours a day, seven days a week, while being paid less than half the legal minimum wage.” Workers are forced to live in company dormitories and deported for complaining about poor treatment, the report finds.

Low-wage temporary workers make up one-third of Toyota’s Prius assembly-line workers, mostly in the auto-parts supply chain. They are signed to contracts for periods as short as four months, and are paid only 60 percent of a full-time employee’s wage.

In 2002, Kenichi Uchino, 30, died while working at the “green” Tsutsumi plant that assembles the Prius. During the 13th hour of a routine 14-hour day, Uchino collapsed on the shop floor of the internationally lauded “sustainable” factory, which uses sulfur-oxide-eating paint and boasts 5 percent emissions reductions. A Japanese court ruled that Uchino’s death was caused by exhaustion from overwork.

His wife, Hiroko Uchino, described a grueling lifestyle that included an 85-hour workweek prior to his death. The NLC published his time cards, which reveal that he was “putting in 106.5 to 155 hours of overtime … in the 30 days leading up to his death.”

Much of this overtime went unpaid. (Toyota explained Kenichi’s extra hours as “voluntary quality control activities,” says the report.) But in court, his survivors were able to win pension payments.

The NLC also alleges that Toyota – through its subsidiary Toyota Tsusho – has joint business ventures with Burma’s military regime. The charges arise from an agreement between Tsusho, Suzuki and the junta to set up parts and material plants in Burma, and produce vehicles for the military government. These ties remain despite a 2001 declaration from the company that it ended contracts with the Burmese government.

In the wake of the report, the company wrote a letter to stockholders: “Toyota has carefully considered the current environment in Burma, has conveyed to Toyota Tsusho Corporation its concerns about that environment, and has asked Toyota Tsusho to reconsider its business activities in the country.” As the largest owner of Tsusho’s stock (more than a third), Toyota itself has a role to play in cutting these ties.

The NLC report also connects the company’s overseas misdeeds to the American economy. Millions of dollars in car parts shipped by Toyota Tsusho are received by Tsusho America, which distributes them to Toyota assembly plants in the American South. This influx of foreign auto infrastructure uses an overwhelming ratio of non-union labor, fueling the diminution of union density in the auto sector.

What’s more, a memo leaked from Toyota’s Georgetown, Ky., plant to the New York Times in late 2007, exposed “management’s plans to cut $300 million in labor costs across Toyota’s North American operations over the next three years.” To do this, Toyota plans to introduce tiered wage scales and reduced health benefits for U.S. Toyota workers, which should come as little surprise to an American auto workforce that has suffered similar attacks from Detroit’s Big Three manufacturers for the past three decades.

As NLC Director Charles Kernaghan says, if Hollywood celebrities – such as actors Leonardo DiCaprio and Cameron Diaz – can popularize green driving, they can also help end Toyota’s sweatshop labor regime and its ties to Burma’s dictatorship.

Says Kernaghan: “We hope that these same celebrities will now also challenge Toyota to improve its respect for human and worker rights.”