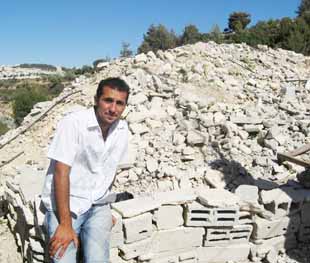 Al-muatasim Salim stands next to a pile of rubble, directly outside his family's new home.

Neighbors helped the Salims rebuild their home, next to the rubble pile of their original home. But less than a year later the bulldozers returned and demolished the second house.

WEST BANK – The Salim family lives in a rural area with steep hills and long views – including views of the red roofs of nearby illegal Israeli settlements. Their home was built on what they thought was Bethlehem municipality, in the occupied West Bank. That is, until late 2005, when Israeli authorities informed them that they were living in “Jerusalem” without a permit for their house.

“My father went to the court more than 10 times,” says Al-muatasim Salim, the eldest of three brothers. “They told him, ‘You are building your house on the borders of Jerusalem municipality, and this area does not belong to Bethlehem.’ They sent us an order [saying] that they will demolish the house within 24 hours.”

After a three-month delay, the Israeli military arrived at dawn in January 2006, while the family slept. “We woke up to the sound of bulldozers,” Al-muatasim says. “They came and, in less than 15 minutes, they demolish the whole house.” The family was ordered to pay a fine of 70,000 shekels (about $20,000) because they had built what Israel says was an “illegal” house.

An Israeli official told Al-muatasim that some of the money was going to the contractor who demolished the house. “They want us to pay the money for the demolition,” he says. In fact, Israeli law allows Palestinian families to be charged for demolitions of their own house, but that hasn’t always been enforced, according to Jeff Halper, an American-born Israeli who founded the Israeli Committee Against House Demolitions (ICAHD).

Neighbors helped the Salims rebuild their home, next to the rubble pile of their original home. But less than a year later, in December 2006, the bulldozers returned and demolished the second house.

In late May, Israeli Prime Minister Ehud Olmert announced that Israel plans to build 1,460 new housing units in the West Bank in what it calls the ever-expanding “Jerusalem.” The government claims it can do this while pursuing a peace agreement with the Palestinians because these units will be added to existing settlements that it plans to keep in any future agreement.

Halper says Israel has destroyed almost 19,000 Palestinian homes since the 1967 occupation of the West Bank and Gaza began, including homes in East Jerusalem. But he also estimates that Palestinians themselves have demolished an equal number of homes because, if they do, “the Israelis cut the fine in half,” he says.

Since last fall’s Annapolis, Md., meeting that attempted to restart the peace process, Halper says Israel has announced the construction of 7,000 new units in existing settlement blocs, which make up at least 20 percent of the West Bank.

With the help of international volunteers from ICAHD, the Salims rebuilt again, albeit a smaller, concrete block house, with two bedrooms, a living room and a kitchen. They’ve lived there for a year, but Al-muatasim says he expects the bulldozers will be back. “This is not the plan just for my family, but for the whole village,” he says, noting that about 50 other families in the village of Walaje have also lost their homes at least once since the Israeli government declared them illegal. (Comment requests from Israel’s Civil Administration of Judea and Samaria – what Israel calls the West Bank – were not returned.)

After the first demolition, the Red Cross gave the Salim family a tent, where they lived for two to three months.

“It was winter,” Seham, the family’s mother, recalls. Her youngest son, Mohammed, was 12 at the time, and taking his mid-term exams. “He didn’t do good that year,” she says, “and he still suffers now.” She says he has nightmares and is always asking if their new house will remain standing for long: ” ‘I don’t know,’ I tell him. ‘I hope so.’ ”