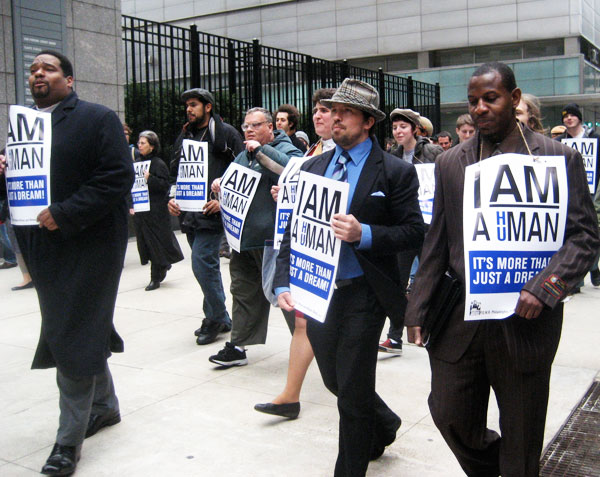 If EFCA were made law, "card check" alone would be sufficient – and museum guards like Alethia Hanible might already be negotiating with AlliedBarton.

The Philadelphia Museum of Art has become an unlikely backdrop to the national campaign to pass the Employee Free Choice Act (EFCA), legislation that would make it easier for workers to form unions.

The museum’s guards, a majority of which signed union authorization cards in November 2008, find themselves in an unusual bind: They are unable to find a union willing and able to push their employer, security industry giant AlliedBarton, to recognize them as a legitimate bargaining unit.

In part, that’s because federal law has specific provisions making it difficult for security officers to organize; guards can join a union that also represents workers who are not guards only if their employer chooses to recognize it. (The rule exists because companies wanted to ensure that guards would be loyal to bosses, and not workers, during strikes.)

Aside from joining a security officers-only union, the only way guards can achieve union representation is when a powerful union like the Service Employees International Union (SEIU) pressures bosses to recognize guards as organized. And that might have happened at the museum–until a controversial 2006 agreement in which SEIU dropped its campaign to organize Philadelphia workers in exchange for AlliedBarton’s pledge to stay neutral during organizing drives in all other parts of the state.

But although over 50 percent of the museum’s workers have signed cards authorizing the Philadelphia Security Officer Union (PSOU) to represent them, they still cannot negotiate for better working conditions. That’s because under current federal law, workers lack the right to organize solely through the “card check” process. (PSOU has not requested a federally conducted workplace election because it has no staff and few resources with which to counter potential AlliedBarton anti-union efforts before the vote.)

If EFCA were made law, “card check” alone would be sufficient–and museum guards like Alethia Hanible might already be negotiating with AlliedBarton. Hanible, who has worked at the museum for two years, says she and other security guards–85 percent of whom are African-American–receive only one sick day per year of employment and are not allowed to speak to visitors. Hanible, who says AlliedBarton has made arbitrary decisions and played favorites with guards, must refer any visitor with questions to the museum’s front desk.

“I was being pushed around. I was being harassed. I was intimidated,” says the 43-year-old mother of four, who earns $10.03 per hour and receives minimal benefits. “I just got fed up with it.”

Eduardo Soriano-Castillo, an organizer with Philly Jobs with Justice and the Philadelphia Officers and Workers Rising (POWR) campaign, says that guards need EFCA. “When unions like SEIU organize guards, they use leverage to force recognition,” Soriano-Castillo said. “But Philly guards are on their own and need EFCA to win their union.”

Since 2005, the Jobs with Justice-backed POWR campaign has run successful “non-majority” union campaigns, helping guards at Temple University and the University of Pennsylvania win better working conditions, wages and benefits despite their lack of official union recognition.

But, as North Carolina union activist Jim Wrenn writes, unionists regard these untraditional “non-majority” agreements as “stepping stones” along the way to formal recognition as a traditional union, rather than as substitutes for new contracts.

Signing authorization cards with PSOU, part of the POWR campaign, has given museum guards protection against employer retaliation under federal labor law. Most workers, forced to go through the National Labor Relations Board elections process, must maneuver through a gauntlet of threats, firings and one-on-one pressure meetings, courtesy of their boss and outside anti-union consultants. A 2007 study (PDF link) estimates that one in five union activists are fired during a typical organizing drive.

But because their local union lacks the legal resources and staff power to combat these possible pre-election scenarios, Philadelphia guards are hoping for passage of EFCA–which would also strengthen penalties for companies that violate workers’ rights during organizing drives.

The Specter of EFCA

On April 9th, more than 200 union activists marched from Philadelphia’s landmark Liberty Bell to Senator Arlen Specter’s office, demanding that the Republican once again support EFCA. Despite co-sponsoring the bill in 2005, late last month Specter announced his opposition to it, saying he would not be the aisle-crossing vote needed to stop a GOP filibuster.

Thomas Robinson, a University of Pennsylvania guard who is chair of the POWR campaign, told the crowd that EFCA matters for low-wage workers. “At the moment, we have a majority of cards signed at the art museum, because people want better wages, benefits and working conditions,” he said. “If EFCA had been passed, we would already be a union. But because of Senator Specter and others…we can’t.”

Specter, who George W. Bush once called “a little bit independent-minded sometimes,” is in the politically unenviable position of being a moderate Republican in an increasingly Democratic state (Obama won Pennsylvania with nearly 55 percent of the vote). Some commentators have said Specter’s flip-flop has more to do with internal party threats than fears of the general election facing him in Pennsylvania’s 2010 primary.

While Specter’s change of heart may not save his political life–a smaller but more conservative GOP base will likely bolster a primary challenge from former congressman Pat Toomey–it certainly puts EFCA’s future passage in doubt, possibly giving cover to corporate-friendly Blue Dog Democrats anxious to undermine the legislation.

Yet despite the significant obstacles facing EFCA in Congress, museum guard Hanible says she will continue pressing for better working conditions on the job. “I got tired of being pushed around,” she said. “I’m a fighter and I’m not giving up.”