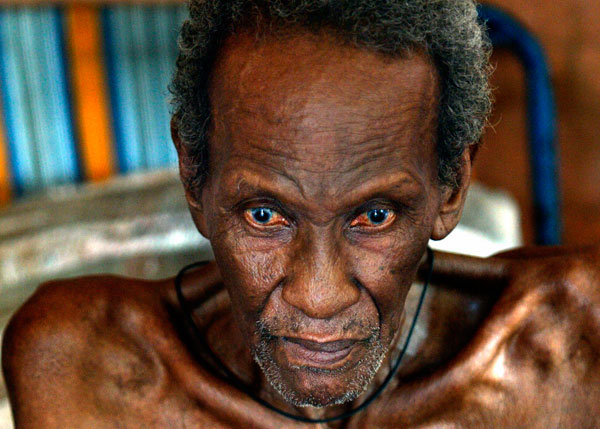 Louis Onesime sits in the house he shares with 26 family members in Port Louis, Mauritius, in January 2005. Onesime lived on Diego Garcia until the archipelago was purged of natives to build a military base.

Their Island, Our Shame

Indigenous Indian Ocean islanders were brutally displaced nearly 40 years ago to make way for a U.S. military base.

Though small in number, the indigenous people of Diego Garcia and the Chagossian Islands in the Indian Ocean have endured a suffering both relentless and intense. In the early 1970s, they were brutally deracinated and dumped in Mauritius and Seychelles to make way for a U.S. military base.

Anthropologist David Vine reports in his new book, Island of Shame: The Secret History of the U.S. Military Base on Diego Garcia (Princeton, May), the islanders had homes–idyllic though modest–employment, healthcare, a diet of fish, fresh fruits and vegetables, enviable longevity, traditions, the memories of their ancestors and a cultural life extending back over centuries in the Chagos archipelago. But through a number of legalistic and diplomatic deceits promulgated by the British and U.S. governments, the archipelago’s 2,000 islanders was expelled, carted away in overcrowded ships without food or sanitation.

The dispossessed Chagossians received minute compensation. They were never paid for their expropriated homes. They lost their vegetable gardens and were not permitted to bring pets or belongings into exile. (Indeed, they watched their dogs be gassed to death and incinerated before they were ejected from the islands.) They lost their jobs in the coconut industry. No occupations awaited them in Mauritius, and they were not trained for new employment.

The Chagossians were basically dumped in their new “homes.” Many lived on the streets, while others paid exorbitant prices for tin shacks in slums. Moneylenders and merchants victimized them, taking their miserable hovels as collateral for loans and purchases and later evicting them. They could not find jobs. As outsiders and people of African–, not the more-privileged Indian–descent, they faced discrimination. Alcohol, drugs and suicide took a toll. Diet deteriorated. They died young, and illnesses utterly new to them–malnutrition, diabetes, heart disease, hypertension, tuberculosis–became rampant. Large numbers became clinically depressed. Many simply died of broken hearts. They were treated, Vine writes, like “rubbish people.”

This was no accidental side effect of the military’s base construction. The military explicitly banned employment of any indigenous people on its base, though it imported workers from elsewhere. And it forbade return visits by the locals, even to tend the graves of their ancestors. It wasn’t until March, 2006, that bad publicity and court cases forced British authorities to permit one visit. Prior to the expulsion, all official reports portrayed the inhabitants as transient laborers rather than a native population. This was done in order to deny their existence and their right to the land, and thus to avoid all political, legal and financial redress.

Though one cannot know the exact attitude of U.S. officials, David Vine aptly quotes Henry Kissinger on the removal of the residents of the Marshall Islands in 1969: “There are only 90,000 people out there. Who gives a damn?” With that attitude, there was no hope for the 2,000 Chagossians. Clearly no one in power thought anyone would care about their fate.

The Chagossians’ displacement is not unique in the history of U.S. military bases abroad. But, as Vine points out, the lies fabricated to conceal the secret agreement in the Chagos Archpelgago are particularly astonishing. Secretary of State Dean Rusk described the islands to President Lyndon Johnson as “virtually uninhabited.” And in June 1964, the Johnson Administration pressured the Washington Post not to run stories that might cause trouble. The Post stories that were published referred to the population as “largely transient laborers.”

Vine does an excellent job of documenting the machinations of military planners and politicians in the 1960s and 1970s, as they sought to evade unwelcome attention from the press, the United Nations or any court system. This was the end of decolonization, the era of imperial plunder and ethnic cleansing was supposedly over and nothing would have looked worse than what was actually happening.

Vine details at length how no other empire has had as many foreign bases–roughly 1,000–as the United States. A few African islanders were not about to thwart the largest military machine in history. So a cast of characters, including foreign policy official Paul Nitze, Admiral Elmo Zumwalt, former White House and CIA official Robert Komer (infamous for running operation Phoenix in Vietnam) and Admiral Arleigh Burke concealed and misrepresented the removal of an inconvenient population. The stakes, as these pooh-bahs saw them, were quite high. Vine quotes military analyst John Pike telling him that the U.S. military’s goal is “to run the planet from Guam and Diego Garcia by 2015, even if the entire Eastern Hemisphere has drop-kicked us” from every other base.

“Although the British Government and its agents performed most of the physical work involved in displacing the Chagossians,” Vine writes, “the U.S. Government ordered, orchestrated and financed the expulsion.” But recently the Chagossians have challenged the destiny so carefully prepared for them, and they have won court cases. They hope they may yet receive compensation and the right to return to their archipelago. After all, if gleaming yachts are allowed to dock on these gorgeous islands, why shouldn’t the original inhabitants be welcome there as well?