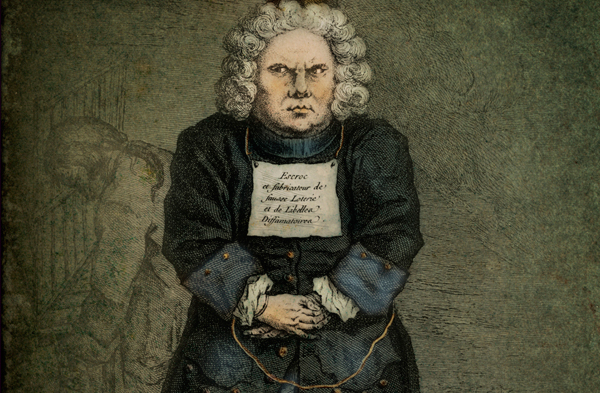 A History of Slander

A new book reveals what 18th-century French libelers and contemporary journalists have in common.

When a member of the Bush administration leaked to columnist Robert Novak that Valerie Plame was a CIA agent, he was engaging in a time-honored tradition of character assassination (Plame’s husband) and the promotion of a patent falsehood (yellowcake uranium) for political ends (the Iraq war). Such tactics have a pedigree that reaches back to 18th-century France and beyond.

In this era of false reports about missing presidential birth certificates, death panels and the supposed socialism/Nazism of mainstream or slightly progressive political figures, Robert Darnton’s new cultural history of slander, The Devil in the Holy Water, or the Art of Slander from Louis XIV to Napoleon (University of Pennsylvania, December) is unfortunately relevant.

In The Devil in the Holy Water, Darnton, a Harvard professor and director of the Harvard library, explores “how the experience of literature under the Ancien Regime [of France’s Bourbon kings] fed into the radical politics of the revolution.” With summaries of many famous libels, Darnton’s book teems with intrigue, deceit, double-dealing, disguises, blackmail, bribery, extortion and smut.

“For all their venality and disingenuousness, libelers prefigured in some ways the modern investigative reporter,” Darnton writes. Indeed, the French Revolution ushered in an era of a free press with a vast multiplication in the number of newspapers. It also brought with it the full flowering of libel literature–the denunciation of someone as a counter-revolutionary. In 18th-century France, such attacks often led to the guillotine. More recently, under Hitler and Stalin, they have led to gas chambers and labor camps.

Darnton writes that like novels “about real people … libels came to occupy an important sector of the book market by the end of the 17th century.” He leads readers through the slums, garrets and “tawdry cafes” of 18th century London and Paris to illuminate how libelers culled news from their sources, mixed fact and fiction and, with no concept of copyright, lifted from each other extensively. Most news traveled by word of mouth. The libelers then patched together anecdotal rumors and bits of gossip into pamphlets, which sold like hotcakes.

These writers were exquisitely personal in the damage they inflicted, though their aims were often political. “The inability of aristocrats to propagate their line provided a libeler with a favorite theme, along with venereal disease transmitted from brothels to the court,” Darton writes. What better symbol of royal rot than sterility and VD?

Permeating Darnton’s canvas is the hideous inequality of a class society dominated by arrogant aristocrats, where the ultimate, sneering insult was to refer to a writer as “starving.”

His account of the accomplished libeler Pierre Manuel, who wrote the sensational Police Unveiled (1790), reveals the direct route from literary hackdom to the revolution. After interrogation and time in prison as a result of his book, Manuel’s small publishing business was ruined, but he struggled along until the storming of the Bastille. As a former prisoner, he gained access to its archives of interrogations and began publishing them, writing himself “into the front ranks of the revolution’s leadership.” He became the prosecuting attorney of the Commune and an eminence in the Jacobin Club, famous for the opening of his address to Louis XVI: “Sire, I do not like kings…” When the going got very rough in the September massacres of 1792, he courageously rescued the novelist Madame de Staël.

Darnton writes, “Under the Ancien Regime, the Baroness de Staël had enjoyed an existence at the summit of society, where literary prestige and political power converged, while Manuel had barely scraped together a living in the lower ranks of pamphleteers. In September 1792, their positions were reversed.” Manuel cleared a path for her through the carnage by announcing “Public prosecutor of the Commune!” From the Commune, Manuel graduated to the National Convention to establish a constitution and thence, during the Reign of Terror, to the guillotine.

Another infamous libel, The Devil in the Holy Water (1783) features a police spy, Inspector Receveur, who is bent on kidnapping French expatriate libelers in London and dragging them back to Paris. It was published by one Marquis de Pelleport, whom Darnton describes as “a thoroughly wicked ne’er do well and a very talented writer,” whose oeuvre deploys “irreligion, ribaldry, parody and buffoonery along with protests against oppression and in favor of liberty.” Pelleport was locked up in the Bastille for years, where he composed his novel, Les Bohemiens, which Darnton regards as an unsung masterpiece.

Pelleport may have had a malicious tongue, but he showed great courage during the revolution, attempting to save the one official who had shown him kindness in the Bastille. Darnton writes, “Already half dead, [the official] said to [Pelleport] ‘What are you doing, young man? You will only sacrifice yourself without saving me.’ But Pelleport … called out again for the rioters to disperse. They … stabbed him with bayonets… But Pelleport lived to tell the tale, and Manuel published it as a testimony to the courage of a man who once had lived from libels.”

Today, reporters and pundits who mix fact and fiction (whether with regard to the Iraq war, or the escalating war in Afghanistan) might find Pelleport’s courage–and transformation as a writer–instructive; even if they don’t stand up to an angry mob, they might stand up to their anonymous sources in officialdom with an occasional daring question.