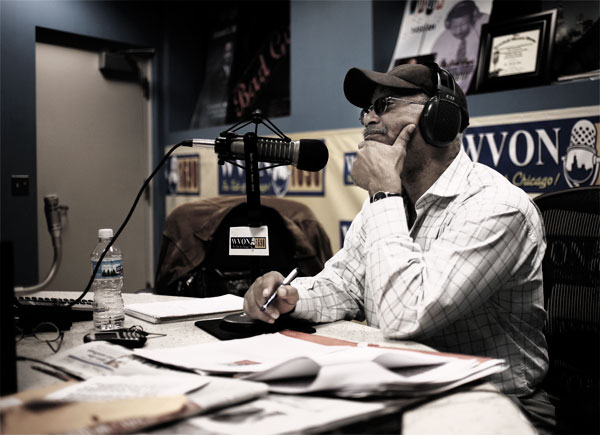 On Air With Black America

Callers’ mistrust of white America is deep; some of it can be attributed to many listeners’ familial links to the South and its tradition of overt and and brutal racism.

Good evening, you’re talking to Salim Muwakkil on 1690 WVON. What’s on your mind?” I ask.

“The election of Barack Obama is the worst thing to ever happen to black people in America,” the caller snarls. “He’s a perfect Trojan Horse for American imperialism and corporate control. What do you think?”

That kind of question is typical fare on The Salim Muwakkil Show, broadcast every Saturday night by Chicago’s only black-owned radio station. These days, one year after the nation’s first black president took office, callers make it clear that African-Americans are divided sharply on Obama’s performance.

Most are reluctant to criticize a man who inherited massive economic and military morasses from his predecessor–and who is, like them, both black and from Chicago. But others, like the caller quoted above, blame Obama for offering cover to the U.S. war machine. This critical perspective was asserted by a group called the “Black is Back Coalition,” which organized a November rally and march in Washington, D.C., to protest the foreign and domestic direction of the Obama administration.

Many callers reflect black Americans’ general unease with military adventures and their wariness of escalating hostilities in Afghanistan. But few are willing to join groups like the Black is Back Coalition–yet.

As a writer concerned with the state of black America, my experience as a WVON-AM talk show host provides me with an organic link to the black community and its most urgent concerns.

In recent months, the topic of youth violence has monopolized discussion on my show. This furor was sparked by the September 28 videotaped fatal beating of 16-year-old student Derrion Albert.

“It’s the parents’ fault; plain and simple, end of story,” one caller says succinctly. Many others agree, blaming the offenders’ parents, particularly absent fathers, for failing to provide necessary guidance.

Others call in to defend their heroes.

“Hello, this is Alice. What I want to say is, I can’t understand why so many black men hate Oprah. It is ridiculous.”

“I understand what you’re saying,” I reply. “She’s so successful. She’s an easy target. But then, she focuses a lot of her criticism on black men in ways some men think aren’t useful to them. I don’t particularly agree with that critique, but that is what people say about her.”

These days, when the most successful radio hosts are usually insulting and abrasive, it’s the rare show that attempts to respect callers. I try to build an audience by challenging people’s views without dismissing or belittling their arguments.

Some media theorists say I have it all wrong, that right-wing radio attracts a large audience because it eschews nuance and context. They may be right. But I think the future of our nation depends on them being wrong.

Chicago’s WVON is one of the few stations in Chicago featuring a steady diet of progressive fare, though it does attempt to provide ideological balance by broadcasting conservative commentator Charles Butler’s evening show every weeknight.

Though many callers express views that could easily be called conservative, most are progressive, at least nominally. Many strongly support single-payer healthcare, and strengthening the social safety net in general.

I have regular callers who are convinced that white America has black genocide on its agenda. Their mistrust is deep; some of it can be attributed to familial links to the South and its tradition of overt and brutal racism. Even a black president can’t dislodge that kind of generational mistrust.

Anti-immigration sentiments are common; “they’re being imported to take our jobs,” is a typical complaint. My arguments to the contrary have changed some minds, but others stubbornly hold their position. I keep trying.

The traditional right-left political spectrum doesn’t quite apply here. I’ve spoken to a left-leaning black nationalist who supports a healthcare “public option,” but opposes abortion as ardently as any right-to-lifer. I’ve debated dedicated union members who agree with white Minutemen that undocumented workers should be summarily deported. I have a regular caller who grew up in an orphanage but now runs an inner-city boxing club that mentors and counsels youth. He is a Mormon.

Yes, the station’s target audience is a bit older than the youthful demographic coveted by commercial music stations, but WVON does attract some young listeners. One of my regular callers is Rhymefest, the 32-year-old Chicago rapper who co-wrote Kanye West’s popular 2004 song “Jesus Walks.”

Context is crucial to understanding this politically complex community of listeners and callers.

Chicago is home to the largest black nationalist groups in the nation, including Louis Farrakhan’s Nation of Islam and the National Black United Front. The city is also a center of progressive activism; the Black Radical Congress, a near-defunct grouping of progressive black activists, academics and journalists, was born here. Additionally, the Rev. Jesse Jackson’s Rainbow/PUSH Coalition (formerly Operation PUSH) is Chicago-based and still fighting the good fight as an advocate for the poor and a clearinghouse for much needed social services.

And the city is home to a number of large black churches and an influential corps of clergymen, including two who gained national exposure during Obama’s presidential campaign. The infamous Rev. Jeremiah Wright of Trinity United Church of Christ married and ministered the Obama family. Father Michael Pfleger of St. Sabina Church, a fiery Catholic priest and social activist who happens to be white, gained some media attention for his mocking portrayal of candidate Hillary Clinton.

This rich ideological landscape accounts for a dizzying array of ideas and emotions in the black community, a discourse that finds expression on WVON.

The station has a well-earned reputation for organizing grievances and bringing energy to political movements; it was the 2002 winner of the coveted Studs Terkel Award from Chicago’s Community Media Workshop–the only media outlet ever to win the award.

Originally a music station owned by Phil and Leonard Chess (of the legendary Chess Records), legendary Chicago journalist Wesley South* converted WVON into an all-talk format in 1986, in the midst of the re-election campaign of Harold Washington, Chicago’s first black mayor. The station played a major role in Washington’s two trailblazing elections and has been an influential voice in black Chicago politics ever since.

In a media environment cluttered with right-wing rants and polarizing pundits–or mainstream outlets that mostly ignore black America altogether–WVON offers a bracing, complex alternative. Instead of false ideological symmetry, you get a complex reflection of a people still struggling with a legacy of exclusion, but looking toward an empowered future. You get a radio station with enormous potential.

The Salim Muwakkil Show can be web-streamed live at www.WVON.com, on Saturdays from 7 to 10 p.m.