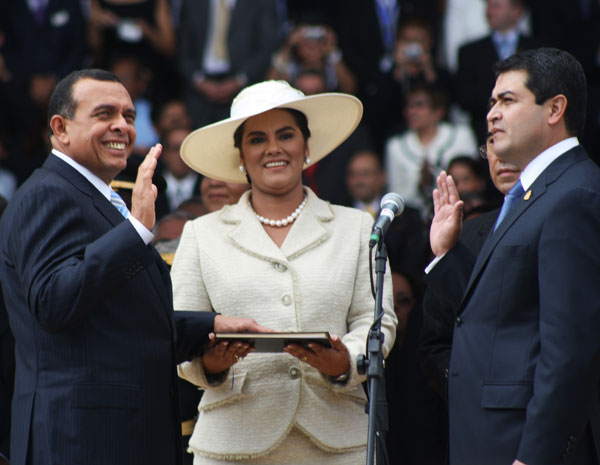 Porfirio ¨Pepe¨ Lobo (left) is sworn in as the new president of Honduras on Wednesday, January 27. "This election marked the...highest voter turnout in our history,¨ Lobo said during his inauguration speech. In fact, just 49 percent of the electorate went to the polls, the lowest national participation rate of all time. (All photos by Jeremy Kryt)

A Lobo in Sheep’s Clothing?

'The military is starting to assert itself,' a human rights worker says. 'All of these recent victims were members of the resistance - we haven't seen that kind of targeting before.'

TEGUCIGALPA, HONDURAS–It was all supposed to be different once Porfirio “Pepe” Lobo took over as the new president of Honduras. Human rights crisis finished. Dictatorship deterred. Even after a highly-contested election in November–which most of the world refused to recognize and more than half of Hondurans didn’t participate in–many both here and abroad still clung to the hope that a new executive officer might resolve what some experts have called a “one-sided civil war” because only the military-backed regime has employed violent means.

The diverse anti-coup resistance movement has maintained a nonviolent stance, refusing to respond even when authorities have attacked peaceful marches and gatherings with chemical-based crowd control weapons, rubber bullets and live rounds. Dozens of peaceful resistance members have been killed by soldiers, police and government-funded paramilitaries since the armed coup against democratically-elected president Manuel Zelaya in June 2009. Even more worrisome, local human rights groups report that clandestine death squads, reminiscent of groups that terrorized the country in the 1980s, are once again roaming the streets at night.

During a heavily-militarized inauguration ceremony in this capital city on January 27, Lobo–whose last name means “wolf” in Spanish–signed an amnesty agreement for those who had perpetrated the coup against Zelaya. The move was seen by many as confirming his pro-coup stance and furthering his attempts to white-wash the military takeover. Lobo urged Hondurans to “forget the past,” saying, “We have proven that we are a peace- and freedom-loving nation.”

But despite Lobo’s rhetoric, there seems to be little peace or freedom in Honduras these days – and many critics say the situation seems unlikely to change under the fledgling Lobo administration.

“In terms of the human rights situation, our overall impression is that in some ways it’s worse since the [presidential] elections [of November 29] than it was before,” said Victoria Cervantes, coordinator of the Chicago-based human rights organization Los Voz de los de Abajo. Cervantes met with In These Times in the capital of Tegucigalpa last week, at the conclusion of a fact-finding trip that combined several international human rights delegations from the United States and European Union.

“What we’re seeing now is a violence that’s very selective against people and communities in resistance,” Cervantes said. “But violence that is very much the style of the death squad and paramilitary violence [of the Cold War era]. In other words, resistance people are found in their closets with their hands tied, ropes around their necks. People have been found with their tongue cut out. Decapitated bodies. [Others have been] raped and tortured.”

According to Meri Agurcia, a human rights worker with the nonprofit Committee for the Families of Disappeared Persons in Honduras (COFADEH), the numbers support Cervantes’ theory. COFADEH has confirmed the deaths of seven resistance members in January alone. In the previous six months, COFADEH reported a total of 28 politically-motivated killings of nonviolent resistance members.

“The military is starting to assert itself,” Agurcia said. “All of these recent victims were members of the resistance–we haven’t seen that kind of targeting before.” COFADEH also reports more than a dozen other incidents of authority-backed violence against pacifist activists in January, including beatings, detentions and one disappearance.

But, even as casualties rise, the eyes of the world seem focused elsewhere.

“What concerns me most is that human rights abuses–including murders–could continue with little international attention,” wrote Dan Beeton, a Honduras expert with the Washington D.C.-based Center for Economic and Policy Research, in an email to In These Times. “Most of the media has ‘moved on’ from the Honduras coup story, and killings that have occurred since the elections…have received very little attention in the foreign press. Meanwhile, the Lobo government–aided by the U.S.–will continue to lobby governments for international recognition while these abuses are ignored.”

President Zelaya emerged from the Brazilian Embassy shortly after Lobo’s swearing-in ceremony last Wednesday, and was taken to the airport in a heavily-armed motorcade. It was his first time outside the embassy since September 21, but the former president spent less than an hour on Honduran soil before being flown into exile in the Dominican Republic.

“For us, it is a great insult, this expulsion of our president,” said top anti-coup resistance leader Juan Barahona, in an exclusive interview with In These Times. “And it is a victory for the putschists, who would have everyone forget what happened last June.”

During his time in office, Zelaya had initiated reforms aimed at increasing quality of life for the more than 70 percent of Hondurans who live in poverty. (More than half of the people in this small textile- and coffee-exporting nation get by on less than a dollar a day.) Zelaya had raised the minimum wage and provided primitive social security and financial aid for students. Then, last spring, when hundreds of thousands of Hondurans petitioned Zelaya to hold a nonbinding referendum on changing the draconian, outdated Honduran Constitution, in favor of a more democratic and participatory national charter, the president agreed to a public opinion poll on the issue.

But the oligarchic Congress, the Supreme Court, and the dozen or so wealthy families who have traditionally ruled Honduras, fearing Zelaya’s reforms would endanger their control over the Honduran economy, aligned themselves with the country’s military to stage a putsch. Zelaya was kidnapped in his pajamas around dawn on June 28, and flown into exile in Costa Rica. The official excuse: that Zelaya had sought to re-write the constitution to extend presidential term limits. But, even after months of searching, there is still no evidence for this, and Zelaya himself had never mentioned it.

“He was the president, and the military attacked him for political reasons,” said Barahona, who was also one of Zelaya’s chief negotiators during the embassy siege. “He never committed any sort of crime.”

But Zelaya’s ouster sparked hundreds of thousands of people to take to the streets in peaceful, near daily marches and assemblies for months after the coup, despite the violent repression by police, soldiers and private paramilitaries. After two unsuccessful attempts, Zelaya returned to Honduras by hiding in the trunk of a car and took up refuge in the Embassy. In a previous interview with In These Times, Zelaya acknowledged that sonic and chemical weapons had been used by police and soldiers against those trapped inside the embassy, and that food and other basic commodities were in short supply.

“Everything [the pustschists] have done has made an impression on us, the people of Honduras,” said Barahona. “The way they sacked our president. The way they treated him in the embassy. The way they tortured him there… All of this has generated great solidarity between Zelaya and the people.”

That solidarity could be the reason for such a big turnout of resistance activists at the airport; estimates of the crowd that turned out to see Zelaya off range from between 300,000 and 600,000. Carrying signs and flags and chanting Zelaya’s name, the crowd faced off with troops guarding the runway at the airport. It was a scene eerily reminiscent of July 5, 2009, when thousands gathered to see one of Zelaya’s aborted return attempts at the same tarmac and soldiers opened fire on the unarmed demonstrators, resulting in several deaths, including a nineteen-year-old activist named Isis Obed. Many in the crowd last Wednesday carried signs bearing Obed’s likeness, and his name was scrawled in several places on airport buildings and walls.

For many in the crowd, the departure of Zelaya–who before boarding his plane pledged to return to Honduras–was a profoundly emotional moment.

“I could not believe how many people I saw weeping,” said Ena Lopez, 22, a student from the capital who attended Zelaya’s farewell rally. “There were grown men crying like frightened children,” Lopez said. “It is a sad day for my nation. And for all those anywhere in the world who love freedom.” A young girl holds a flag with Mel Zelaya´s picture on it as soldiers guard the runway where the ex-president´s plane took off moments before.