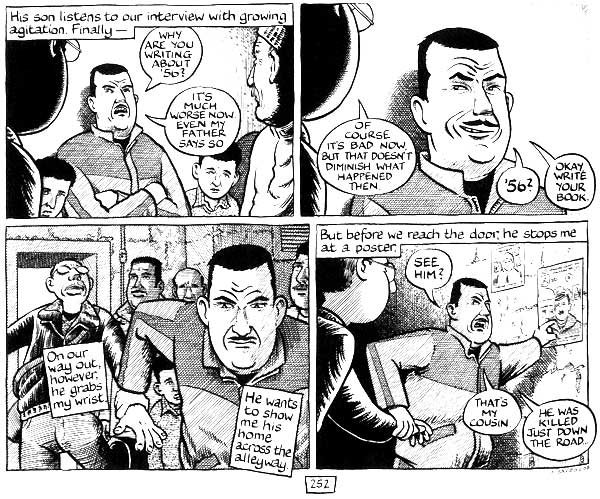 Sacco largely lets the survivors speak for themselves. Through his art, he shows us what things looked like from their perspective.

Joe Sacco has spent his career covering war zones–Palestine, Bosnia, Iraq. But unlike most war correspondents, his dispatches arrive in the form of comics. Sacco uses cartoon renderings of the people he interviews, along with meticulously detailed background scenes, as the vehicle for his striking style of journalism.

In his latest book, Footnotes in Gaza, Sacco returns to the Middle East to investigate two incidents that took place decades ago, during the Suez Crisis of 1956. The first incident is a massacre of 275 Palestinian men by Israeli forces at Khan Younis. The story is deceptively straightforward: The soldiers shot the men in their homes or dragged them into the street, lined them up against a wall, and shot them. The second story is far more complex. During an anti-guerilla operation, the Israeli military entered the border town of Rafah and ordered all the men to appear at a nearby school. They held the men there, surrounded by soldiers and concertina wire, and questioned them for the greater part of the day, hoping to identify militants hiding among the population. At the same time, patrols searched the rest of the town, looking for arms or men (presumably enemies) who had refused the order to appear at the school. But the military rationale obscures the human detail–the fear, humiliation, needless brutality, and, in the end, the arbitrary execution of more than 100 Palestinians.

Rather than rely on the sterile language of official documents, Sacco largely lets the survivors speak for themselves. Through his art, he shows us what things looked like from their perspective. With a great deal of local assistance, he found and interviewed dozens of people who witnessed these events more than half a century ago. They are old now, and they have seen a lot since then. Their memories represent Sacco’s greatest source of information, and his greatest frustration. Details have faded, events blur together, stories become intertwined. Witnesses may forget what they have seen, or may remember what they have merely heard. Sometimes they have trouble telling the difference.

Sacco has taken his time–six years and 400 carefully drawn pages–to assemble the evidence, weigh it, and present it fairly. He is honest about his difficulties, about his doubts and frustrations. He shows us the differences in the various accounts, notes the contradictory evidence, and admits to discarding stories that he or his aides consider unreliable. His chosen medium–the comic–is perfect for this sort of work. For the comic allows the reader to literally see the different perspectives. The narration can run alongside, or overtop, the imagery, the two elements complementing one another while preserving the possibility of irony, uncertainty, tension, or conflict. But just as important are the things the medium doesn’t do. It doesn’t provide us with a pseudo-reality like film or the disembodied objectivity of journalistic prose. The comic is obviously an artifice, a creation. And Sacco’s narrative style–putting himself in the frame, recounting not only the product of his research but the process as well–makes the most of the medium’s unique features.

Sacco’s approach also provides a kind of context. Because he did his research in modern-day Gaza (or almost: between 2002 and 2003), the story of 1956 is surrounded and framed by other stories: Israeli attacks and Palestinian funerals; suicide bombings in Tel Aviv; the build-up to the U.S. invasion of Iraq; and a long series of home demolitions, including the one that killed the young American peace activist, Rachel Corrie.

Why write about something so long ago when all of this is happening now? Sacco is asked this question, and he asks it of himself, repeatedly. “Of course it’s bad now,” he replies, “but that doesn’t diminish what happened then. …. Events are continuous.”