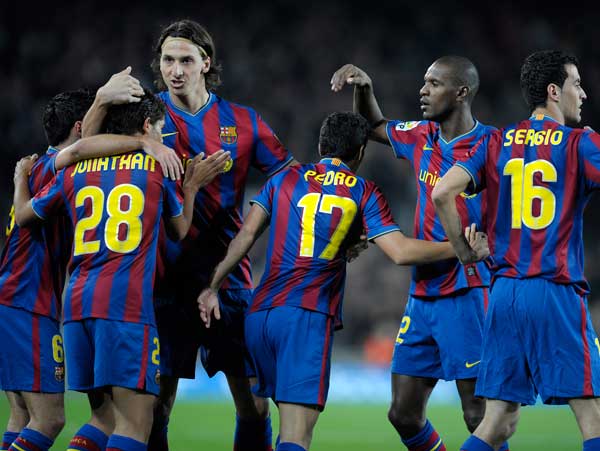 Barcelona's players celebrate after scoring a goal against Villarreal during their Spanish League football match between Barcelona and Real Madrid on January 2, 2010 at Camp Nou stadium, in Barcelona. (Photo by: LLUIS GENE/AFP/Getty Images)

When FC Barca and Real Madrid face each other on April 11, Spain’s political history will loom large.

By fighting humanitarian battles off the field, Barca is a rare example of a successful franchise that manages to keep sports in proper perspective.

Last year, the soccer team FC Barcelona achieved one of the greatest seasons in the history of sports by winning both the Spanish League title, the European Champions League and four other trophies, becoming the first team ever to win the sextuple.

But Barca (as it is popularly known) is more than just a formidable soccer team. By fighting humanitarian battles off the field, it is a rare example of a successful franchise that manages to keep sports in proper perspective.

For more than 100 years, Barca has conducted itself as a “defender of freedom and democratic rights,” as team president Joan Laporta puts it, “facing up to others in a time of governments without tolerance.” The team’s immense stadium is adorned with paintings by Joan Miro and Salvador Dali, and the club is owned by its fans–more than 150,000 of them.

Today, when Barca is at least as successful financially as it is athletically, the team continues to manage its wealth in accord with its democratic values. For years, Barca’s jersey was easy to distinguish: It was the one without a corporate logo emblazoned across the chest. “If you take into account how much they could have made from selling to a conventional sponsor,” observed the Guardian’s Paolo Bandini, “the decision is staggering.”

In 2006, the team finally made a deal to fill the space on their jerseys: It agreed to wear the logo of UNICEF (the United Nations Children’s Fund), announcing that it would donate 1.5 million euros (over $2 million) to the organization each year for five years. And this spring, Barca’s best and most marketable player, Lionel Messi, took on the new role of UNICEF Goodwill Ambassador.

On April 11, Barca will face its fiercest rival, Real Madrid. The contest will feature not only the two teams tied for the league lead, but teams who symbolize divergent Spanish political undercurrents with powerful historical significance.

Even now, the events of the Depression-era Spanish Civil War have lost little of their power to provoke passion. The Barca-Real contest is a perfect embodiment of those passions. Literally and figuratively, Real Madrid represents the historical winner of the war. “Madrid is a club that inspires admiration among football fans all over the world,” says Real’s captain Raul Gonzalez Blanco. Its crest includes the royal crown, and in the 1930s it was the favorite team of Spanish dictator Francisco Franco. Real Madrid has won more Spanish League and European Champions League titles than any other team.

In contrast, Barca had widespread support from Catalonia’s left-wing politicians and intellectuals during the Civil War. As a result, Franco harassed and persecuted the club mercilessly. His troops bombed the building in which the team’s trophies were kept and he closed its stadium for six months and ordered the execution of its president. “When you lose against Madrid,” observes Barca captain Carles Puyol, “you lose more than three points. It’s the moral blow that hurts most.”

Last summer, Real Madrid spent upwards of 160 million euros ($218.7 million) to acquire two world-renowned soccer players, Kaka and Cristiano Ronaldo. Barca won the first meeting of the season, 2-0, in November. When they meet again this month, Barca players will wear the UNICEF logo across their chests, and Real Madrid will wear the logo of its current corporate sponsor. The action will be broadcast around the world.

Many viewers will enjoy the spectacle of watching world-class athletes compete. But for other viewers, Barca will represent a beacon of hope that has stayed true to its traditional values of citizenship and democracy.