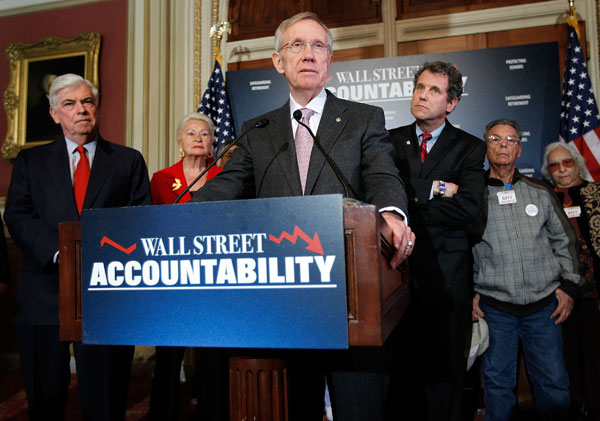 ‘Reformers have to fight the Obama administration as much as they do Wall Street,’ says former federal regulator Michael Greenberger. ‘Franklin Delano Roosevelt must be rolling over in his grave.’

Related to the question of who-regulates-whom is a strategic choice for President Barack Obama and the Democrats. With polls showing little belief in the administration’s willingness to stand up for the powerless, the Democrats could recoup sagging enthusiasm by promoting tough regulation of Wall Street, forcing a breakup of mega-banks and subjecting all risky instruments (“derivatives”) to full disclosure. But signs suggest that Obama’s inner circle has rejected this approach.

An April 26 ABC/Washington Post poll showed the public trusted Obama to do a better job than his Republican opponents on financial reform, with Obama’s approach preferred by a 52 percent to 35 percent margin. However, other polls suggest that only a minority of Americans believe that federal policies under Obama actually assist working people. Democracy Corps pollsters Michael Bocian and Andrew Baumann reported, “Just 3 percent agreed that government’s policies helped ‘the average working person’ or ‘you and your family’ ” and “a 46 percent plurality of voters think Obama and Democrats put bailing out Wall Street ahead of creating jobs for ordinary Americans.”

But Bocian and Baumann add, “Our polling reveals that pro-reform messages generate intense responses among Democratic voters while also appealing to independents … Fully 90 percent of Democrats backed the measure [a hypothetical ‘strong’ reform proposal], including 55 percent who did so strongly, while independents favored reform by a solid 55 to 45 percent margin. Even 39 percent of Republicans supported the bill.”

Yet Obama has been unwilling to take Wall Street head on. For example, he expressed reluctance to cap executive bonuses for fear of driving away top talent like Jamie Dimon, CEO of JP Morgan Chase & Co. ($17 million bonus for 2009) and Lloyd Blankfein, CEO of Goldman Sachs ($9 million bonus). “First of all, I know both those guys,” Obama told Business Week in February. “And I, like most of the American people, don’t begrudge people success or wealth. That’s part of the free market system.”

Still, there remains enormous momentum for placing constraints on Wall Street’s speculative excesses. Maximum-strength reforms would include protecting the public from bailouts of banks by the Federal Reserve or Federal Deposit Insurance Corporation; requiring full disclosure of all transactions; establishing a Consumer Financial Protection Agency that prevents families from being victimized with variable-rate mortgages and other scams; and breaking-up of the nation’s largest banks so that they would no longer have “too-big-to-fail” stature. Moving in this populist direction could potentially isolate Republican opponents, who could be easily depicted as waterboys for Wall Street in the November mid-terms.

President Obama and leading Democrats like Senate Banking Chair Christopher Dodd (a long-time bankers’ buddy) are leaning toward soft reforms that would purportedly gain “bi-partisan” support, i.e. reforms that would maintain the good will of Wall Street donors. According to the Center for Responsive Politics, during the past decade the financial sector spent more money than any other industry, more than $3.9 billion, to influence Washington policy.

A number of respected financial experts, however, also worry that the Democrats will pull their punches, calculating that modest reform is all that’s needed to deflate the public furor. University of Maryland law professor Michael Greenberger, a former federal regulator who battled the crucial deregulation measures advocated by Lawrence Summers and enacted during the Clinton era, has warned that the Obama administration does not support efforts to reform the shadow banking system of derivative dealing. “Reformers have to fight the Obama administration as much as they do Wall Street,” he said in an address to the Roosevelt Institute. “Franklin Delano Roosevelt must be rolling over in his grave.”

Simon Johnson, the former chief economist for the International Monetary Fund and a professor at the Massachusetts Institute of Technology, is among those who think that Obama and top Democrats are crafting reforms palatable to Wall Street. “The Democratic leadership is not seizing on this advantage [anti-banker sentiment] and on the opportunity presented by the SEC case against Goldman Sachs [filed in mid-April]–key figures in the Democratic establishments are too worried about upsetting financial sector donors,” he says. “As a result, come November, independents will view the Democrats with scorn, while the Democratic base will be far from energized; you do the math.”

Similarly, progressive economist Robert Kuttner, author of the new book A Presidency in Peril: The Inside Story of Obama’s Promise, Wall Street’s Power, and the Struggle to Control our Economic Future, worries, “Senator Chris Dodd could snatch defeat out of the jaws of victory,” he writes on the Huffington Post. “If Obama’s tactical advisers think that passing a weak bill will make the anti-Wall Street popular sentiment disappear, they are kidding themselves. Regular Americans will just see both parties as sellouts, and the tea parties will get new recruits.”

Obama and his chief staffers, who have stressed the need for a modernized regulatory framework for Wall Street rather than a fundamentally different economic strategy aimed at downsizing the financial sector’s mostly speculative role in the U.S. economy. Finance has accounted for up to 40 percent of the profits of domestic corporations in recent years, luring capital to speculation. Meanwhile the productive base increasingly weakens, with the U.S. losing 5.6 million industrial jobs–32 percent of its manufacturing– since 2000 alone. This critical dimension to the banking crisis has barely penetrated mainstream discourse.

Critics charge that the Dodd approach creates loopholes for the continued unregulated trade of “derivatives.” New York Times financial writer Gretchen Morgenson dismissively writes off the Democrat’s proposals: “It is a shame that Congress is moving forward with financial regulations that do not eliminate the ‘heads-bankers-win, tails-taxpayers-lose’ mentality that has driven most of the bailouts during this sorry episode.”

Vultures: Too big to regulate?

Johnson notes that the Obama administration has premised its opposition to full disclosure of derivatives on the argument that it would stifle “innovation.” The Dodd bill, he cautions, contains “some dangerous remaining loopholes still supported by the Obama administration,” including, “allowing the trading of economy-destroying derivatives by U.S. financial firms operating overseas, like the debt-hiding instruments that Goldman Sachs concocted for the cratering Greek government.”

The Dodd bill also fails to set limits on the size of financial institutions. To correct that lapse, Sens. Sherrod Brown (D-Ohio) and Ted Kauffmann (D-Del.) are promoting an amendment that would limit the size of banks to about $300 billion in assets and thus force the break-up of the mega-banks. This amendment seems to be gaining in popularity, but Dodd–acting as Obama’s point man–will likely view it as going too far. If Dodd moves ahead with a plan under consideration to strike a deal with Republicans, one likely price of the bargain will be that no amendments now being stockpiled by progressive Democrats will be allowed during the floor debate.

For his part, Sanders vows to continue trying to make the Dodd bill better. “I intend to do my best to make it stronger, he told the New York Times. “I think the bill will look different when that vote comes.”

Yet Democrats in Congress may wish to consider the possibility that Obama and Chief of Staff Rahm Emanuel are asking them to risk their electoral fates in November by supporting a symbolic but loophole-laden bill that the public may come to regard as far too weak, in order to maintain the long-term financial backing of Wall Street.

Wall Street and its allies are continuing to spend an estimated $1.4 million per day in lobbying to create other loopholes, like weakening the proposed rules that would now cover 90 percent of derivatives.

As the debate moves forward, the fate of seemingly obscure amendments will reveal whether Obama and the Democrats are truly committed to preventing another Wall Street meltdown and taxpayer bailout, or are content with superficial reforms that will not upset their friends and donors–the banks that are now too big to regulate.