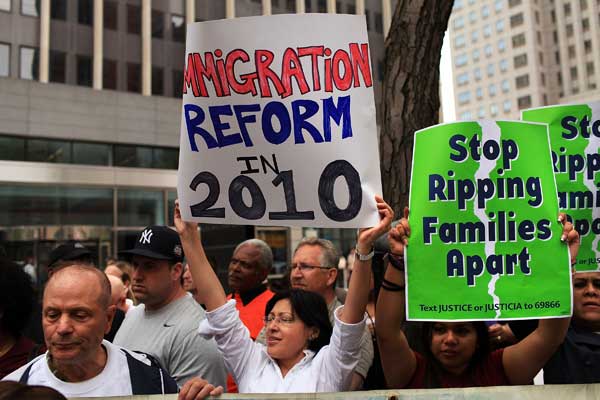 Protesters rally before an act of civil disobedience to protest the lack of federal immigration reform, on May 17, 2010, in New York City. Nearly two dozen labor and community leaders, local clergy and City Council members were arrested while stopping traffic. (Photo by Spencer Platt/Getty Images)

Organizing for the Impossible

In Creative Community Organizing: A Guide for Rabble-Rousers, Activists and Quiet Lovers of Justice (Berrett-Koehler, February), Si Kahn argues that culture must be integrated into organizing, but he does not always succeed in showing how to do so. He discourages an “add culture and stir” approach, yet the stories he tells–singing to maintain hope while being arrested, designing an organization’s logo to communicate mission, values and inclusivity–are little more than that. And Kahn’s examples of “creative” organizing–such as forming alliances with the faith leaders of a campaign target–strike me as simply good organizing.

What Kahn does, however, is successfully critique some core assumptions of Alinsky-style organizing. Saul Alinksy, the founder of community organizing, began in the 1930s by working with neighborhood groups in Chicago to leverage change from local power-holders. The model he developed, in part based on the labor movement, has since been institutionalized by national training groups and adapted by activists in other movements. Alinsky’s currency recently got a boost when he was “discovered” by the media amidst the presidential campaign of a certain former community organizer.

But dissing Alinsky is now in vogue. Organizers today understand the problems of traditional Alinsky organizing: the focus on large mobilizations of people doesn’t encourage people to gain a deeper understanding of community issues; generates egoism among organizers; and sparks turf wars between organizations. The ideas of radical Brazilian educator Paulo Freire–who espoused a theory of organizing based on a cycle of critical reflection, action, and critical reflection again–have challenged Alinsky’s intellectual reign. Freire’s ideas have been increasingly adopted by organizers in the worker center movement and assimilated into foundation-speak.

Kahn, a community organizer for 45 years and a singer-songwriter, distances himself from Alinsky when he writes that community organizing must not only change power, but also people’s relationship to it. In other words, he calls for organizing to raise and transform consciousness. At the same time, Kahn holds to fundamental Alinsky organizing concepts, like appealing to people’s self-interest, even as he stretches those concepts. (He describes his own motivations for organizing as “moral self-interest.”)

But why not also recognize that some people are motivated by solidarity? Self-interest may initially lead people to join a movement, but solidarity can sustain involvement. Workers join the Arise Chicago Worker Center, where I work, most often out of self-interest–they want justice on the job. But others join because they believe in our mission to organize low-wage and immigrant workers. Sure, we can reduce this impulse to self-satisfaction–“feeling a part of something”–but I find that concept less compelling than solidarity.

Kahn poignantly questions the utility of the traditionally held “stop sign principle,” in which an organizer galvanizes the community around an easy, winnable target–like compelling a local official to install a stop sign at a dangerous intersection. The victory teaches people they have power and in this way, the theory goes, an organizer can prepare the community for increasingly bold campaigns against power-holders.

As Kahn points out, “You run out of fixed fights pretty quickly.” And after easy victories, the community may be unprepared and unable to deal with losing real battles. He advocates a more poetic vision of organizing, in which we fight for “the impossible”–campaigns that seem out of reach but ultimately can appear inevitable. Kahn’s position boils down to a simple question: Why not organize the community to fight for what it really wants?

He provides evidence for the wisdom of a more direct approach. He details how Grassroots Leadership, the national anti-private prison organization Kahn founded, in August 2009 convinced the Obama administration to end the federal government’s practice of detaining immigrant families at the T. Don Hutto Residential Center (a former state prison run by a corporation) outside of Austin, Texas, and scuttled federal plans to build three new family detention centers.

To gird himself for ambitious organizing, Kahn adopts a modest optimism, telling us that we “never know what is possible … and therefore we can never compromise with injustice.” At its best, Creative Community Organizing offers an ethical guide for organizers working in poor communities that they’re not from, and makes clear that progressive values must not be abandoned for strategic positioning. Kahn recounts a Student Nonviolent Coordinating Committee (SNCC) strategy to force department stores in Forrest City, Ark., to hire black workers. In order to divide and conquer, SNCC leaders decided in 1965 to boycott just one of four local stores, the “Jew store.” Kahn, who is Jewish and began his organizing career with SNCC that year, writes:

SNCC was fighting for the ultimate underdog, African Americans. To target another historic underdog, even if one more privileged than his Black customers–didn’t that just reinforce the injustice? I was not just learning how to do creative community organizing, I was being introduced to its ethical complications.

With stories like these, Creative Community Organizing challenges organizers to reflect on their relationship to the communities they work in. That kind of self-awareness and sensitivity are crucial if ordinary people are to make extraordinary change.