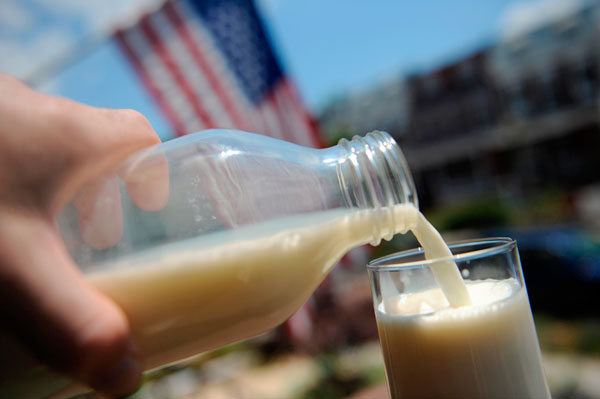 Despite being illegal in many states, thousands of Americans seek unpasteurized “raw” dairy products that enthusiasts say cure everything from asthma to autism. (Photo by: TIM SLOAN/AFP/Getty Images)

In January, the Massachusetts Department of Agricultural Resources (MDAR) proposed new regulations that would ban off-the-farm sale and distribution of raw milk. Prior to making the revamped regulations public, MDAR issued cease-and-desist orders to four milk-buying clubs that buy raw milk directly from small farmers and distribute it among members. MDAR Commissioner Scott Soares insists the clubs’ activities are illegal and that the new rules are “intended to be a clarification over what has always been the case.”

Soares says MDAR began revising raw milk protocol in an “effort to align regulations with those outlined by the Food and Drug Administration.” And according to the Massachusetts Department of Public Health, the bottom line here is safety. But Alexis Baden-Mayer, political director of the Organic Consumers Association, describes Soares as an “[a]nti-raw milk crusader.” And David Gumpert, author of The Raw Milk Revolution, says that regulation is “not about safety–it’s about protecting markets.”

“Conventional dairy doesn’t want raw milk tarnishing the image of pasteurized milk,” says Gumpert, who notes that while no one has died in Massachusetts because of raw milk, three people died in 2007 from Listeriosis from pasteurized milk. He adds that the “the [Center for Disease Control] and FDA have blind spots around raw milk. They don’t want to do research on it.”

The CDC and FDA, along with several other organizations including the American Medical Association, the American Academy of Pediatrics and the American Veterinary Medicine Association, are unequivocally opposed to raw milk consumption, making it difficult for raw milk advocates to push for wider legalization. Nevertheless, 10 states allow raw milk retail sales.

Figures used by the CDC and others to demonstrate the dangers of raw milk consumption show it to be a blip on the screen of food-borne illness in the United States. The CDC reports that from 1993 to 2006, unpasteurized milk caused 69 incidents of human infections, with 1,505 reported illnesses, 185 hospitalizations and two deaths. That averages out to about 116 illnesses a year, or less than .000002 percent of the 76 million people who contract food-borne illnesses every year in the United States.

All the big agencies mobilized against raw milk consumption hinge their arguments on the potential bacterial dangers of the milk. The CDC claims that “disease-causing organisms can only be eliminated in milk through pasteurization” while realrawmilkfacts.com, a site managed by public health professionals and a personal injury lawyer representing E.coli victims, states that raw milk is “produced in environments that are unavoidably contaminated with fecal material.”

Mark McAfee, owner and operator of Organic Pastures, the largest raw milk dairy in California, says, “The state monitors and tests all of our raw dairy products multiple times per month, and has never found one pathogen in any of our products. Even more interesting is the fact that not one human pathogen has ever been found in the hundreds of environmental swabs that have been taken in our plant facility.” McAfee maintains that raw milk has natural enzymes that kill pathogens–enzymes that are destroyed by pasteurization.

Winton Pitcoff, raw milk coordinator for North East Organic Farming Association in Massachusetts, has no illusions about the milk produced by industrial dairies where cows eat grain and stand in their own manure. “That milk should be pasteurized,” he says. “Small, raw dairies are simply better suited to keep pathogens out of the milk in the first place.”

Agencies opposing raw milk consumption also deny its supposed health benefits. “There are no health benefits from drinking raw milk,” according to the CDC. But a 2006 European study by the University of Basel in Switzerland, one of the only major studies done on the health benefits of raw milk, showed a “statistically significant inverse association with asthma” in raw milk drinkers.

Considering the relative safety of raw milk and its possible health benefits, campaigns against its legalization are surprisingly intense, and not just in Massachusetts. In late May, Wisconsin Governor Jim Doyle (D) vetoed a bill that would have allowed the sale of on-the-farm raw milk.

Doyle, who in the weeks before the veto was lobbied by Wisconsin’s dairy industry, wrote that he “must side with public health and safety of the dairy industry.” But Wisconsin raw milk proponents say he succumbed to pressure from big agricultural corporations who feel financially threatened by the growing popularity of raw milk, which is something industrial dairy operations can’t safely produce.

Gumpert puts it this way: Foodborne illnesses are unavoidable when food is produced for hundreds of millions of people, but “neither raw nor pasteurized milk is particularly risky. Look at hamburger meat, spinach, peanut butter–there’s no talk of banning these foods, even though they’ve been huge public health hazards.”

What it comes down to, Gumpert says, is choice: “People have a fundamental right to access healthy food.”

Marie Landau, a graduate of The Evergreen State College, is a summer 2010 editorial intern.