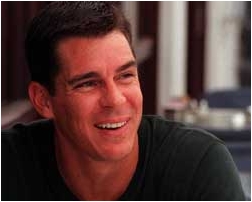 After retiring, Billy Bean came out in 1999.

Is Baseball Ready for a Gay Jackie Robinson?

BY Peter Dreier
Share TweetReddit0 EmailPrint
Richard Greenberg’s Take Me Out, which won this year’s Tony award for best Broadway play, tells the story of a celebrated New York City baseball hero who announces that he’s gay. In reality, no gay major league player has ever publicly acknowledged his homosexuality while still in uniform. How close are we to real life imitating art?

The U.S. Supreme Court’s June ruling in Lawrence v. Texas is one indication that Americans are increasingly accepting of homosexuals. Out-of-the-closet gays and lesbians have been elected to Congress and are prominent in the entertainment industry, business, journalism, and the clergy. Many big cities and suburbs have openly gay schoolteachers. TV sit-coms have openly gay characters and the New York Times now includes same-sex wedding announcements.

Certain spheres of American life, however, have resisted change. The military has infamously clung to its code of “don’t ask, don’t tell.” Professional sports leagues may not enforce such a policy overtly, but in practice its force is equally felt, especially for male athletes.

It is easier for athletes in individual sports—like tennis star Martina Navratilova and diver Greg Louganis—to come out of the closet than players on team sports. According to conventional wisdom, a gay teammate would threaten the macho camaraderie that involves constant butt-slapping and the close physical proximity of the locker room. So while there are no doubt homosexuals currently playing in the National Football League, National Basketball Association, and Major League Baseball, they are deep in the closet.

Three former NFL players have come out after they retired. David Kopay, who hid his homosexuality while playing as an NFL running back for nine years in the ’60s and ’70s, came out in 1975 and was the first major athlete to do so. Roy Simmons, an offensive guard for the Giants and the Redskins from 1979 to 1983, revealed his sexual orientation during an appearance on The Phil Donahue Show in 1992. Esera Tuaolo, a 280-pound defensive lineman who played nine years in the NFL, came out last year, three years after he retired. Revealing his secret on HBO’s Real Sports and in ESPN Magazine, he acknowledged that while playing in the NFL he lived with his partner, with whom he now has two adopted children, but felt compelled to keep it a secret. His teammates routinely told gay jokes in the locker room, he explained. “They made me go further and further into depression, further and further into shame.”

Only two gay former major league baseball players, Glenn Burke and Billy Bean (not to be confused with former player and current Oakland A’s General Manager Billy Beane), have come out of the closet. Burke, who played for the Dodgers and Oakland A’s from 1976 to 1979, came out to family and friends in 1975 but lived in fear that his teammates and managers would discover his sexual orientation.

In his autobiography, Out at Home, published posthumously, Burke revealed that the Dodgers’ management offered to pay for a luxurious honeymoon if he would agree to a “marriage of convenience” to conceal his homosexuality. When he refused, he was traded to the A’s. The A’s manager Billy Martin made public statements about not wanting a homosexual in his clubhouse, a clear reference to Burke.

Frustrated, Burke retired and kept his homosexuality secret until he cooperated for a 1982 article in Inside Sports magazine. Burke continued to play competitive sports. He won medals in the 100- and 200-meter sprints in the 1982 Gay Games and played basketball in the 1986 Gay Games. Later, Burke struggled with drug abuse, homelessness, and AIDS, from which he eventually died in 1995.

While Bean played for the Tigers, Dodgers, and Padres from 1987 to 1995, he pretended to date women, furtively went to gay bars, and hid his gay lover from teammates and fans. In his recently published memoir, Going the Other Way, Bean recounts how Dodgers manager Tommy Lasorda constantly made homophobic jokes, even as Lasorda’s gay son was dying from AIDS.

Bean quit when he could no longer stand living a double life. When he came out publicly in 1999, his story made front-page news in the New York Times. Like Kopay, since coming out, he has become active in gay rights causes.

In his autobiography, Behind the Mask, Dave Pallone—a major league umpire who was quietly fired in 1988 after rumors about his sexual orientation circulated in the baseball world—contends that there are enough gay major league players to create an All Star team. Indeed, because everyone assumes that there are gay ballplayers, the game of trying to identify them sometimes leads to bizarre rumors and denials. Last year, for example, Details magazine quoted New York Mets manager Bobby Valentine as saying that professional baseball is “probably ready for an openly gay player,” adding, “the players are diverse enough now that I think they could handle it.”

Then, New York Post gossip columnist Neal Travis speculated that Valentine’s comments were a “pre-emptory strike” meant to pave the way for one of his players to come out. “There is a persistent rumor around town,” Travis wrote, “that one Mets star who spends a lot of time with pretty models in clubs is actually gay and has started to think about declaring his sexual orientation.”

The rumors focused on the Mets’ star catcher Mike Piazza, who felt compelled to hold an impromptu press conference. “I’m not gay,” Piazza announced. “I’m heterosexual.” But he also said he believed that players were ready to accept an openly gay teammate. “In this day and age,” Piazza told reporters, “it’s irrelevant. I don’t think it would be a problem at all.”

Perhaps not. But at least one team and one player has to be willing to break the barrier, just as the Brooklyn Dodgers and Jackie Robinson did more the 50 years ago.

The breaking of baseball’s color line was not simply an act of individual heroism on Robinson’s part. As historian Jules Tygiel recounts in Baseball’s Great Experiment, it took an inter-racial protest movement among liberal and progressive activists, as well as the Negro press, who had agitated for years to integrate major league baseball before Dodgers General Manager Branch Rickey signed Robinson to a contract in 1945, then brought him up to the majors two years later.

Rickey, aware of the many great black ballplayers in the Negro Leagues, believed that the integration of baseball would improve the overall level of play. He also believed—correctly, it turned out—that black baseball fans would flock to Ebbets Field to watch black athletes play on the same field as whites.

Robinson did more than integrate major league baseball. The dignity with which he handled his encounters with racism among fellow players and fans—on the diamond as well as in hotels, restaurants, trains, and other public places—drew public attention to the issue, stirred the consciences of many whites, and gave black Americans a tremendous boost of pride, paving the way for the civil rights movement a decade later. Indeed, Martin Luther King once told pitcher Don Newcombe—who along with Roy Campanella followed Robinson from the Negro Leagues to the Brooklyn Dodgers— “You’ll never known what you and Jackie and Roy did to make it possible for me to do my job.”

Major league sports and the military were two of the first national institutions to be racially integrated, but they are among the last to openly accept gays into their ranks. Some managers, fellow players and sportswriters know the identity of at least a few gay major leaguers, but so far no gay player has been involuntarily outed.

No doubt a few of MLB’s gay players have considered coming out publicly while still in uniform. Certainly there are gay players in college or in the minor leagues who fantasize about being the gay Jackie Robinson. But so far they have calculated that the personal or financial costs outweigh the benefits. They fear being ostracized by fellow players, harassed by fans, and perhaps traded—or dropped entirely—by their team’s management. There is a strong fundamentalist Christian current within major league baseball, which could make life uncomfortable for the first “out” player. That, in turn, could affect his ability to play to his potential.

And, initially at least, an openly gay player might lose some of his commercial endorsements.

Of course, if several gay ballplayers came out simultaneously, no single player would have to confront the abuse (as well as bask in the cheers) on his own, as Robinson did.

In 1947, Rickey feared that if Robinson turned out to be a bust as a major league player, it would set back the cause of ending baseball apartheid for at least several years. The same may be true today in terms of the first out-of-the-closet ballplayer. A player of All Star stature would make things easier for everyone who followed.

Asked about the likelihood of a gay player coming out of the closet, Philadelphia Phillies manager Larry Bowa told the Associated Press: “If it was me, I’d probably wait until my career was over. I’m sure it would depend on who the player was. If he hits .340, it probably would be easier than if he hits .220.’’

Baseball executives certainly recognize that there are plenty of gay—or otherwise sympathetic—baseball fans who would spin the turnstiles to cheer for a homosexual player. Lesbians now constitute a significant segment of the audience for women’s pro basketball.

Although baseball no longer has the monopoly on fans’ affections that it did in Robinson’s day, it still plays a central role in our culture. As Robinson showed, once that barrier is shattered, it will have profound ripple effects, not only in sports but in many aspects of American society.

However it happens, expect to see an openly gay major league baseball player by the end of the first decade of the 21st century.