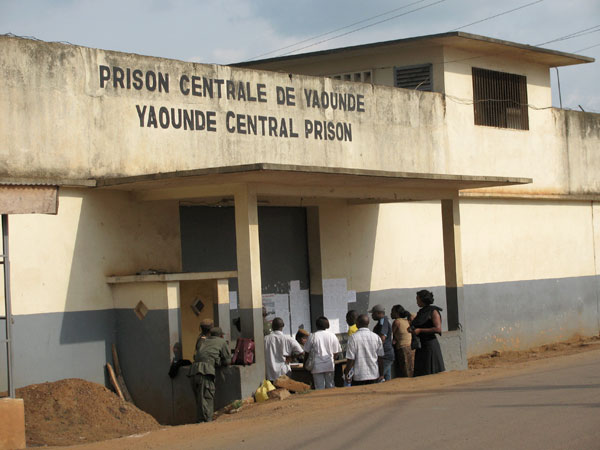 Where the Press is Free to Die

Death of jailed journalist raises questions in Cameroon, one of Africa’s most corrupt nations

“They were beaten on the soles of their feet, not allowed to sleep or eat and kept in dark rooms in stress positions,” says Innocent Ngoungang, a journalist for Le Jour who knew Ngota and who has spoken with the prisoners.

Yaounde, Cameroon–In the outdoor courtyard of Kondengui prison, the heat and the stench are overpowering. My shirt clings to my back as the guard scrutinizes my press card.

At the invitation of the government, I am in Yaounde, the capital, to attend an international conference and observe Cameroon’s 50th anniversary of independence. But while I’m here, I take the opportunity to find out more about the death in custody of Bibi Ngota, one of three journalists arrested for investigating alleged kickbacks paid by a senior government minister in a deal with the country’s biggest oil company.

I have come to the infamous jail to get an interview with the prison governor or with Serge Sabouang and Robert Harrys Mintya, the two journalists still in jail. The prison courtyard is as far as I get. My request for interviews is turned down and I am roughly escorted off the premises.

Ngota, Sabouang and Mintya were arrested on February 5 by Cameroon’s secret service, the Directorate-General of External Intelligence (DGRE), on charges of forgery. Days earlier, each of their newspapers received a copy of a letter purportedly written by Laurent Esso, secretary-general of the Presidency of the Republic of Cameroon and chair of the board of Cameroon’s state-owned oil company Societe National des Hydrocarbures (SNH). The letter contained instructions for SNH’s deputy director-general to pay “commission fees” of $2.5 million for the purchase of a luxury hotel ship. The journalists decided to ask Esso about the letter.

They were detained by the DGRE for seven days, during which time they were questioned extensively about the source of the original document. The men claim they were tortured. “They were beaten on the soles of their feet, not allowed to sleep or eat and kept in dark rooms in stress positions,” says Innocent Ngoungang, a journalist for Le Jour who knew Ngota and who has spoken with the prisoners.

After seven days, Sabouang and Mintya were transferred to Yaounde Central Prison, known as Kondengui, while Ngota, who suffered from asthma and hypertension, was transferred to a hospital for treatment. On February 25, despite his fragile health, he was taken to court and charged with fraud. Ngota was then also sent to Kondengui where, says his father, he was put in a cell with 27 other inmates and forced to sleep on the floor.

Ngota’s health deteriorated and he was transferred to the prison infirmary, where he contracted tuberculosis. He died on April 22 and his wife and two small children buried him in his village of Mengali. Following an international outcry, a judicial inquiry was ordered to investigate the circumstances of Ngota’s death.

Ngoungang says the letter was sent by someone in the government. “It must have been an important person to have access to such a document,” he says. He thinks the leak is part of a power struggle within Cameroon’s political class, with individuals positioning for when 77-year old President Paul Biya steps down or is forced from office. Biya, president since 1982, recently amended Cameroon’s constitution to allow himself to run for a third term in 2011. Rumor has it that if he wins another term he will cede power, perhaps creating a Biya dynasty by installing his eldest son Frank as president.

During the 50th anniversary celebrations the SDF, the main opposition party, took the opportunity to express frustration with the Biya government. As they passed the presidential stand packed with dignitaries, including several African heads of state and a contingent of international journalists, party members held up signs denouncing the country’s electoral commission. Once the marchers were out of sight, the police moved in, confiscating banners and beating protesters.

“Cameroon has the all the props of a true democracy but the substance of democracy is not there,” human rights lawyer Bernard Muna says. “The government was interested in finding out who leaked the story and tortured Bibi to try and get the information.” Minister of Communication Issa Tchiroma denies this. “He was arrested because he was a rascal,” Tchiroma tells me. “The devil became his adviser and he had to be doomed.”

With its varied landscape and 200 tribal groups, Cameroon is often referred to as “Africa in miniature.” This description is also apt considering the country’s great inequalities of wealth and rampant corruption–conditions that plague many nations on this troubled continent. Despite its large oil reserves, 50 percent of the population live on less than $2 a day. And in 1999, Transparency International deemed Cameroon “the most corrupt country in the world.”

As Sabouang and Mintya await sentencing, their newspapers try to keep their case alive. On May 3, World Press Freedom Day, more than 300 journalists gathered in central Yaounde to protest Bibi’s treatment. Armed troops broke up the protest, and journalists, including Ngoungang, were beaten.