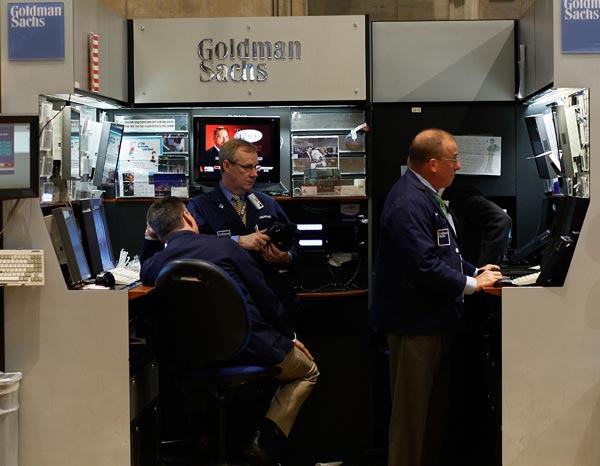 Financial professionals work in the Goldman Sachs booth on the floor of the New York Stock Exchange near the end of the trading day May 4, 2010 in New York City. (Photo by Chris Hondros/Getty Images)

Firms abuse transfer pricing by shifting costly assets from places like the United States to low or no-tax jurisdictions, say, Luxembourg or the Bahamas.

As the saying goes, two things in life are certain: death and taxes. Unless you’re a multinational corporation.

In that case, if you’re on the brink of death–and “too big to fail”–the government might bail you out. As for taxes, the federal code is designed to help you avoid paying your fair share to the U.S. Treasury.

A bill introduced by Rep. Charles Rangel (D-N.Y.) that would chip away at some of these tax loopholes passed in the House on May 28, only to collapse less than a month later in the Senate under the weight of a GOP filibuster. Republicans say the legislation was too expensive. While boosting unemployment benefits and extending certain expiring tax credits, the American Jobs and Closing Tax Loopholes Act of 2010 (H.R. 4213) would have eliminated $14 billion of foreign tax credit loopholes, its drafters say.

Corporate tax avoidance is a costly problem. Last year, General Electric–which is divided into an industrial business, and a financial services business, GE Capital–paid no U.S. taxes, despite reporting consolidated profits of $11 billion. That’s because GE shifted its profits overseas, thereby incurring a U.S. loss of $498 million. “Over the last two years, GE Capital has displayed an uncanny ability to lose lots of money in the U.S. and make lots of money overseas,” Forbes reported in April.

GE is not alone. In 2008, the U.S. Government Accountability Office (GAO) reported that nearly two-thirds of U.S.-domiciled corporations had not been paying federal income tax.

How much such “legal” tax avoidance schemes cost the Treasury is unknown since corporate tax documents, like personal returns, are not public. Estimates vary from $20 to $120 billion annually.

As a result, U.S. corporate income taxes now rank near the bottom among all developed countries. According to the White House, in 2004 U.S. multinational corporations paid $16 billion in U.S. taxes on $700 billion of foreign active earnings–an effective U.S. tax rate of 2.3 percent.

Among the techniques companies use to avoid paying U.S. taxes is what’s known as “transfer pricing.” Transfer pricing involves the fees subsidiaries of a corporation charge each other for intercompany exchanges. Firms abuse transfer pricing by shifting costly assets from places like the United States to low or no-tax jurisdictions, say, Luxembourg or the Bahamas. Intangible assets like patents and trademarks are especially attractive for income-shifting schemes since their value is arbitrary and therefore more open to distortion.

For example, a pharmaceutical company might transfer a drug patent to an overseas subsidiary in a low-tax jurisdiction (Ireland is a current favorite). It then charges its U.S. divisions, which account for the bulk of distribution, a hefty licensing fee for use of the patent. Thus, income is shifted to the patent-holding subsidiary, while the U.S. subsidiary records a loss.

Of the 100 largest U.S. corporations, 83 have subsidiaries in low-tax countries, according to President Barack Obama.

Rebecca Wilkins, a senior counsel of federal tax policy at the nonprofit Citizens for Tax Justice, says that corporate America has pushed tax avoidance schemes to the “brink of illegality.” “They’ve gotten incredibly creative at it and have many highly paid consultants helping them do it,” Wilkins says.

Take Goldman Sachs, which had an effective tax rate of 34 percent in 2007 on record profits of $11.6 billion. Yet a year later, the company’s tax rate had fallen to 1 percent.

How’d they do it? “If you look at their financials for that year, they pretty much tell you that it was due to the way they restructured the company and that they moved a lot of business offshore,” Wilkins says.

Lawmakers have long been aware of the abuses, but Wilkins doubts Capitol Hill has the “appetite” to address them.

In an e-mail sent to In These Times, Sen. Byron Dorgan (D-N.D.), who with Sen. Carl Levin (D-Mich.) commissioned the 2008 GAO study, called transfer-pricing abuse a “major problem.” “We must give the IRS new tools to help combat transfer-pricing schemes,” Dorgan writes. “It’s essential that we put the brakes on U.S. multinational companies that are moving profits offshore to avoid paying U.S. taxes they rightfully owe.”

Separately, on May 19, Rep. Lloyd Doggett (D-Texas), who sits on the tax-writing House Ways & Means Committee, introduced the International Tax Competitiveness Act, which limits the transfer of intangible assets to overseas subsidiaries.

“We need to be doing much more to combat international tax abuses,” Doggett said via e-mail. “It is particularly galling that some of the biggest recipients of the massive taxpayer bailout have subsidiaries in tax-haven countries.”

Doggett’s bill was assigned to the Tax Subcommittee of the House Ways & Means Committee, where it is being considered.

Yet one must wonder if a corporate power base with enough leverage to nearly take down the global economy and still finagle a $700 billion bailout from the federal government will ever be effectively reined in. While a handful of legislators cries foul, savvy corporations continue to play a game of hide-and-seek with the IRS. And all the while the U.S. Treasury bleeds.