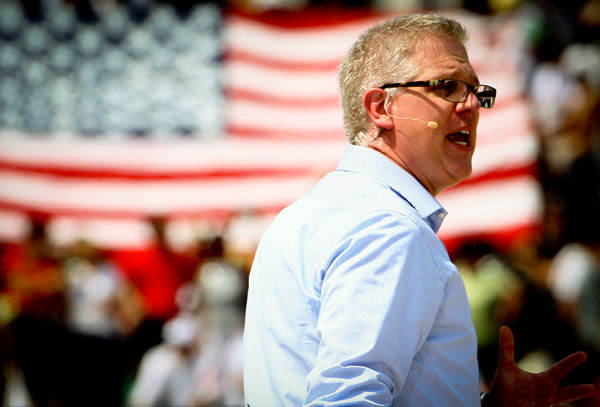 "America today begins to turn back to God," Glenn Beck said during the "Restoring Honor" rally on the National Mall on August 28, in Washington, D.C. (Photo by: Alex Wong/Getty Images)

Beck has become a preacher, fashioning a faith that merges politics and religion. It is a faith that draws on and re-enacts the nation’s most enduring religious tradition. And he is its messiah.

We sit in the dim light of the theater, waiting for the full measure of entertainment and enlightenment the $18 ticket entitles us to. The cost is about double that of other movies, but we have been promised a plan to restore “trust, truth, and treasure” to the homeland. How can you put a price tag on that?

After the final preview fades, across the screen flashes a list of the ways that American government is broken. A pregnant silence follows, then the question: “Had enough yet?”

Enter Glenn Beck, our host for the evening, dressed in a purple sweater, jeans and Chuck Taylors. Beck is a former alcoholic and addict who was driven to the brink of suicide under the ministrations of “Dr. Jack Daniels” before sobering up and finding religion (Mormonism) in the late 1990s. Now a hero to Red America as the host of an early evening show on Fox News, Beck has promised to uncork some hard truths for our edification. But for now he just lets the love wash over him, mugs for the cameras, and grins.

This special December screening is the video companion to Broke, Beck’s October 2010 book, which will sell about 1 million copies if past sales figures are any guide. The movie is a two-hour affair, performed live in Pittsburgh and relayed via satellite to theaters in every major American city. It all adds up not just to a big pile of money–Beck made an estimated $23 million in 2009–but a sphere of influence among the substantial number of Republicans who are inclined toward Tea Party-ish enthusiasms and activism. In a recent poll of Republican Party activists, Beck was named the GOP’s second-favorite personality behind Rush Limbaugh.

Beck’s prop this evening is a deep-blue vintage Mustang in mint condition sitting on the left side of the stage. He explains that it is symbolic of the U.S. Constitution as it was originally drafted, before the nation put some miles on it and started “tinkering” with it. “The Founders gave us the perfect engine,” says Beck. Everything will be fine if we just restore its original condition.

What this means in practice is never clear. Beck avoids questions about slavery and voting rights for women and minorities in the 1780s. He mostly talks about personal virtue and empowerment, and rebuilding the nation’s faltering character.

“They” need you to believe you’re powerless to change things, Beck says. “They” signifies some combination of the federal government; the mainstream media, embodied by the New York Times; educational institutions; liberal-leaning religious institutions; and so-called experts, especially scientific experts associated with all of the same.

Beck returns to the theme of deficits again and again, which is curious because there is no connection between deficit spending and the Constitution. After all, borrowed money helped build the nation and some of the Founders certainly did support deficit spending. But what the Constitution signifies for Beck and his followers isn’t a set of specific laws or principles that should govern the nation. It is more like a code of virtue that should regulate individual conduct. The code’s highest values are freedom and personal responsibility. Government’s only legitimate function is to protect freedom. Everything else is left to the individual. What deficit spending does, from this point of view, is wear away at the code of virtue passed down by the Constitution. It makes us all debtors unable to fulfill our obligations.

Broke gets rolling. Beck brings up charts comparing our Medicare and Medicaid spending with the entire budgets of other nations. He talks about the fiscal crises past and present wreaking havoc in Europe. He warns about hyperinflation, citing the case of Weimar Germany, where people walked around with bundles of worthless cash in wheelbarrows. Experts can’t solve the problem, says Beck; it’s they who got us into this mess. “We’ve got to decide! We’ve got to be the greatest generation.”

“No chance!” snorts the man in the row in front of me, shaking his head. He’s the Loud Talker in the audience. Though he mostly agrees with Beck, he hates the idea that there might be hope.

His mood presumably lightens as the message turns darker, more apocalyptic. “I haven’t wanted to be the one to bring this message,” says Beck, teary-eyed and choking on his words. “It’s crazy to think the things I’ve said the past few years. But now they’re happening.” The nation has been subverted from within. “They” corrupted everything, with malice aforethought. “The rain is coming,” Beck says. “It’s time to build an ark.”

The Loud Talker is impressed. “He does massive amounts of research,” he says to his companion, who registers my pen and paper while glancing back. “We should be taking notes.”

When I was a kid, each summer my family piled into our Chevy and drove to my grandparents’ farm in northeastern Missouri. They weren’t farmers, but they bought the property–about 500 acres, a barn and a small house–and moved there in the early 1970s, when my grandfather retired from his job at a John Deere factory in Ottumwa, Iowa. The nearest town was several miles away.

Only a few years ago, on the way to my grandfather’s funeral, did I ask why they had pulled up roots and spent several years of retirement isolated from everyone and everything they had known. (They eventually did move back to Iowa.) It turns out they were preparing for the invasion of the American homeland by Soviet forces. All through the ’50s and ’60s, they had been reading books and pamphlets published by doomsayers, most endorsed by or associated with the John Birch Society. So the middle of nowhere seemed a good place to ride out the coming Communist storm. I thought about that farm as Beck choked out his words about the coming rain, the building of an ark.

One interpretation of Beck–whose early professional life was spent as a radio “shock jock” using vulgar humor to offend and entertain commuter audiences–sees him as an entertainer still playing a role. But things are more interesting, and more ominous, than that.

Beck has become a preacher. Turn down the sound and he is indistinguishable from the televised megachurch evangelists who hammer away at sin day and night. The relentless pacing of the stage, punctuated with pregnant pauses and abrupt stops; the impish “we know something they don’t know” grins; the fierce earnestness; the odd and inscrutable gazing into the distance; the weeping and wailing for the nation’s soul.

Beck has fashioned a faith that merges politics and religion–and he is its messiah. It is a faith that draws on and re-enacts the nation’s most enduring religious tradition: decrying a cancer within the body politic and calling for redemption and a return to wholeness. Think of witches, slavery, Catholics, Jews and blacks. Think of the John Birch Society and godless Communists.

What has replaced witches and slavery and minorities and Communism is the American state. Not the America that exists in Beck’s imagination, but “establishment” America, represented by the federal government’s bloated bureaucratic agencies, addiction to spending and secular humanism. “Those with the spiritual armor will save the republic,” Beck cries out near the end of Broke.

Of course, this is all an act: an act of faith. Faith is a conviction that goes beyond the available evidence and becomes true through the process of believing. Beck has constructed a story in which America is at war against itself–the “real” America against a usurper state. It’s the founders and their true descendants who believe in freedom versus the progressives–from Woodrow Wilson to Barack Obama–who believe in the enslavement of individuals and the ever-increasing power of the state.

A century of progressivism–which is to say, treason–brought us to this point. Now, the battle is on.

With the fate of humanity’s last best hope, America, hanging in the balance, this is a powerful story. For a large percentage of the conservative movement and the GOP, it is also a true story.

“Kill me. Jail me. Hate me,” Beck thunders. “My convictions are the only thing that matter.” “A hard rain’s a-gonna fall,” Bob Dylan once sang, in a very different political context. Now Glenn Beck says it’s raining and he’s building an ark. Brace yourself–it looks to be a rough ride.