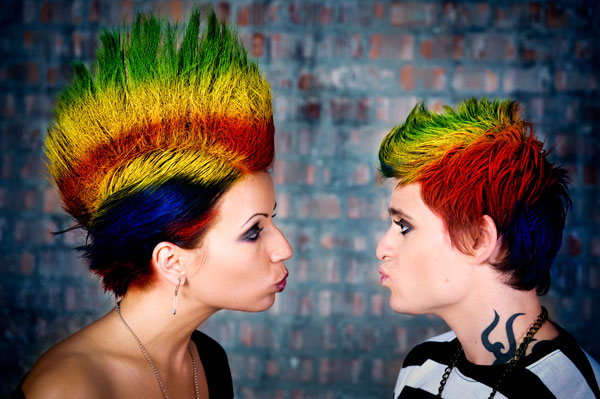 What did the gay rights movement look like before marriage took the center stage? It was more militant, radical and fun—in short, more queer. (Photo by Gehring János/istockphoto)

The gay rights movement must be about more than the fight for marriage equality.

Queer (In)Justice explores the mutually reinforcing ways that heteronormative legality is used to marginalize and control other oppressed groups.

Last summer, the police in Portland, Ore., responded to a spike in reported gay-bashings by creating a queer neighborhood watch, called the Q Patrol. Volunteers patrol together in the area surrounding the city’s gay bars and dance clubs. If they see trouble, they call the cops. But many in the LGBT scene–especially young transgender or genderqueer people–have denounced the collaboration and called on the queer community to create alternative means to ensure public safety, independent of and, to some degree, against the police.

Writing on qPDX.com, Katey Pants, a local activist, put it this way: “Will more police patrolling where we live, love and work make us safer? Some of us live outside of the system. Some of us are sex workers. Some of us use drugs. Some of us are not gender conforming. Some of us are undocumented people. I think it is very reasonable to assume if the police were patrolling our work places, our dance clubs, our neighborhoods, that we would be more subject to arrest and not protection.”

Other activists were baffled. The cops were offering to help, to protect sexual minorities, and to include gays and lesbians in their community policing efforts. Isn’t that what we all want?

Queer (In)Justice: The Criminalization of LGBT People in the United States (February, Beacon Press) helps to explain why. Written by a team of lawyers and activists, the book describes in detail the historical and present-day treatment of LGBT people by the criminal justice system. (Full disclosure: Upon reading the book I found that I was one of the “experts” whose work was cited.) Individual chapters look at the history of laws penalizing homosexuality, and then detail the treatment queer people receive at the hands of police, in court and in prison. It’s an ugly picture: a stream of profiling and stereotyping, verbal and physical abuse, invasive searches, minor insults and traumatic humiliations, disproportionate and discriminatory sentencing, family disruption, coercive gendering, incarceration, isolation, and rape.

The concluding chapter, “Over the Rainbow,” provides a vision of a just and free world, and briefly sketches a practical agenda to help bring us closer to it.

The strength of Queer (In)Justice is that, though it focuses on the experiences of lesbian, gay, bisexual, transgender and other queer people in its analysis, it never isolates these experiences from the surrounding social facts of race, class, nationality, immigration status and so on. It never suggests that “queer” encompasses a person’s–or a community’s–entire identity. It never makes it sound as if homophobia is the only oppression at issue, or the only one that matters. In this way, the book thoroughly explores and clearly articulates the multiple, overlapping, and mutually reinforcing ways that heteronormative legality is used to marginalize and control other oppressed groups, especially the poor, people of color and women.

This insight, and the insistence on viewing heteronormativity as one element in an interconnected web of social inequality, provides the ethical and political foundation for the book’s critique, and for the solutions it proposes. For, if queers also suffer under racist and class oppression, and if the criminalization of gender and sexual difference disproportionately affects poor people and people of color, then not only would it be wrong, but it would also be self-defeating. We must not advance a gay agenda independent of, or at the expense of, these other (or not-so-other) struggles for liberation.

A similar liberationist perspective is beginning to appear in the context of the gay marriage debates. The provocatively titled collection Against Equality: Queer Critiques of Gay Marriage (September, 2010), for example, highlights those individuals, relationships, needs, desires and experiences left out of the marriage model. The best pieces in the book–“Is Gay Marriage Anti-Black?” and “Queer Kids of Queer Parents Against Gay Marriage!”–bring the authors’ personal experiences to bear on their analyses. Others, such as “Marriage Is Still the Opiate of the Queers,” explain how marriage came to take central stage in the gay rights movement, and recall what the struggle looked like before it did. (Answer: It was more militant, more radical and more fun–in short, more queer.)

Unfortunately, the quality of the essays is low, resembling disposable blog posts more than enduring compositions. Moreover, the book doesn’t present a critique of marriage, or of gay marriage. Instead, it settles for platitudes that remind rather than convince. No one provides the premise-to-conclusion critiques of marriage, or attempts to offer a new or distinctly queer perspective of the institution. The real target is not gay marriage but the gay marriage agenda.

The effect is like a potluck where too many people bring potato chips and no one serves an entreé. It’s out of balance, and you leave feeling a little bit sick.

Still, it is good to see people staking out a position to the left of the liberal matrimonialists. Luckily, Against Equality is not the only place that this is happening. In 2006, queer activists, including some of the contributors to Against Equality, drafted the manifesto “Beyond Same-Sex Marriage” (available at BeyondMarriage.org). It demands respect for all family arrangements, not just conjugal, monogamous, cohabitating couples and their children. The document insists that everyone–irrespective of their family situation–deserves to have their needs met, “including but not limited to: affordable and adequate health care, affordable housing, a secure and enhanced Social Security system, genuine disaster recovery assistance, welfare for the poor.”

Two years later, Nancy Polikoff, one of the “Beyond Same-Sex Marriage” authors, offered a more thorough accounting of her views. Her book, Beyond (Straight and Gay) Marriage, presents a historical, political and legal critique of the institution. More striking, Polikoff argues that, largely as a result of feminism, the social significance of marriage has been in decline for half a century. The liberalization of divorce, the end of legitimacy laws, the increase in cohabitation outside of marriage, the advent of second-parent adoption, and similar cultural shifts, have all–with much success–increased the cultural and material support for a diversity of family forms, and with it, the freedom to create relationships as we wish. From this perspective, the marriage fetish seems not merely unambitious but positively reactionary.

The questions LGBT people have to confront are much the same as those other marginalized groups face: Do you demand access to unjust institutions or do you seek to replace them with other, better arrangements that meet everyone’s needs? Do you pursue privilege or justice? Inclusion or freedom? For our own well-being, we need to know.