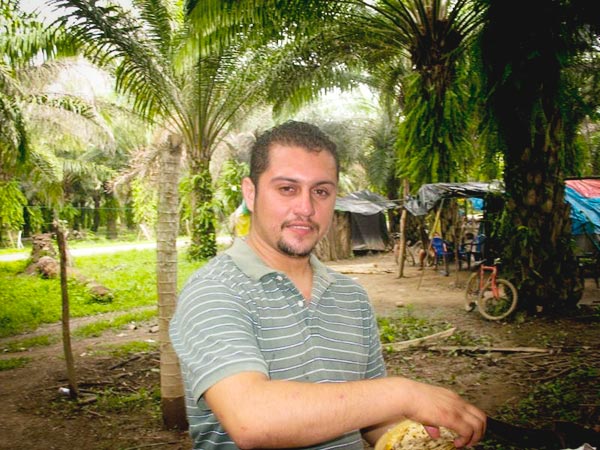 Juan Chinchilla, on one of the disputed African palm plantations that Honduran peasants have peacefully occupied, before he was kidnapped and tortured on January 8. (Photo courtesy of Rights Action)

A peasant organizer is kidnapped and tortured, as his movement continues to occupy land claimed by corporations.

'The oligarchs hope to terrorize the campesinos and drive them from the land,' says Chinchilla, who remains in hiding.

TEGUCIGALPA, HONDURAS–As he rode his motorcycle home through the Aguán Valley of Honduras on the night of January 8, 2011, Juan Chinchilla noticed he was being followed. When the car closed in, Chinchilla, a 25-year-old organizer for the Unified Campesino Movement of Aguán (MUCA), used his cell phone to call local MUCA members for help. But when his friends arrived on the scene a few minutes later, they found only his bullet-ridden motorcycle overturned in the weeds.

That night, Chinchilla was taken to a remote storage shed by hooded and armed men, some of whom wore the uniforms of Grupo Dinant, one of the largest agro-businesses in the country. After a day of being tortured and questioned about campesino (peasant) groups and their leaders, a disfigured and traumatized Chinchilla escaped while being moved to another site by throwing himself down a hillside in the dark. “The oligarchs hope to terrorize [the campesinos] and drive them from the land,” says Chinchilla, who remains in hiding and spoke to In These Times by cell phone from an undisclosed location in Honduras. “But we will fight for our land [and] our rights, without arms, and in peace.”

Rafael Alegria, director of Via Campesina, an umbrella group for peasant labor rights that includes MUCA, agrees that Chinchilla’s kidnapping–which was also corroborated by the U.S. State Department–was intended to send a message.

“[T]hey burnt his hair and arms [with a blowtorch], because they want to shut him up,” says Alegria. “The impresarios [landowners] were hoping to scare the campesinos. But we don’t scare easily.”

Former President Manuel Zelaya had sought to help the tens of thousands of impoverished campesino families throughout Honduras by enacting land reform laws, but in June 2009 he was ousted in a military coup supported by the country’s traditional elites. “[The coup] made it easy for the right-wing oligarchs…to take what they wish with impunity,” says Alegria.

After the coup, fearing their newly-designated lands would be forfeited to the corporate interests that had backed the takeover of the government, tens of thousands of campesinos rose up to peacefully occupy the acres Zelaya and the Honduran Congress had legally granted them in April 2008.

The results have been grim. During the last year, 35 peasants from the Aguán region have been killed by paramilitaries and private security contractors working for corporations like Grupo Dinant, say peasant groups. Meanwhile, living conditions among campesinos continue to deteriorate.

“Our families are starving,” says Blanca Espinoza, who had come to the capital of Tegucigalpa on January 20 as part of a MUCA delegation intended to draw international attention to the plight of the peasants. “We need land and seeds to cultivate,” Espinoza says. The average income for a family in Aguán, she says, is less than $37 per month.

The campesinos’ grassroots demonstrations–in which thousands of peasants moved onto the disputed land and began planting crops and building huts–has led directly to friction with Grupo Dinant, which controls 42,000 acres in the Aguán Valley and is owned by Miguel Facussé, one of the richest men in Honduras. Last year, the World Bank gave Facussé a loan of $30 million to grow African palms in Aguán. But the land Dinant planned to use for the new plantations was occupied by the peasants.

On November 15, five peasants were killed by Facussé’s security contractors near a palm plantation in Aguán. (Grupo Dinant and Miguel Facussé declined to be interviewed for this article.) A few weeks after that shooting, President Porfirio Lobo–a wealthy landowner who backed the coup against Zelaya–sent soldiers and police to occupy the Aguán Valley, ostensibly to look for weapons among the campesinos. According to government reports, no arms have been found.

So far, the coup-installed government has sided with the corporate powers. No investigations have been made into the November killings, and on January 18, 2011, the Honduran Supreme Court ruled that Decree 18-2008–the land reforms sponsored by Zelaya and the Honduran Congress–were “unconstitutional.” The plaintiff in the case was The National Federation of Farmers and Ranchers of Honduras (FENAGH), a group thought to have close ties to Miguel Facussé and Grupo Dinant.

“FENAGH does not want the state giving away public lands for free,” Marvin Ponce, vice president of the Congress, told In These Times. “They feel that if the campesinos want land, then they must pay for it.”

According to Ponce, the 2008 reforms had called for more than 148,000 acres to be distributed. Now, says Ponce, all that land is in limbo. “[The ruling] could very well lead to more violence, even an open agrarian conflict…,” Ponce says. “This [land dispute] has been going on for more than thirty years,” he adds. “It doesn’t look like it will end anytime soon.”

Chinchilla agrees, insisting that the campesinos have no intention of surrendering their rights. “They can torture us, shoot us, starve us,” he says. “But we will never give up our dreams, our dignity, or our land.”