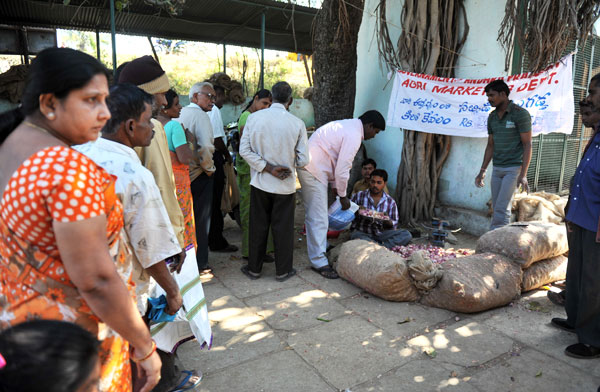 Indian customers line up to buy onions sold by the Agriculture Department under a price-controlled scheme in a market in Hyderabad, on January 12, 2011. With food inflation climbing above 18 percent and unseasonal rains in southern India threatening crop production, India's Prime Minister Manmohan Singh called in his top cabinet ministers to discuss the problem. (NOAH SEELAM/AFP/Getty Images)

Diet Hard: With a Vengeance

Less than three years after the last food crisis peaked, prices—along with hunger and malnutrition—are up again. Don’t (only) blame nature.

Speculators are back, seeking to exploit—and in the process drive up—prices. New global investments in agriculture derivatives reached $2.6 billion in December, double the level a year earlier.

Just a few years after one major global food crisis, a new worldwide spike in agricultural commodity and food prices is generating both predictable and extraordinary fallout. The search for causes once again leads to a conjuncture of flawed policies–in trade, environment, finance and agriculture–that is likely to produce more dangerous volatility in years to come.

Over the past year, food prices around the world shot sharply upward, surpassing the previous price surge in 2007-2008 to set a new record, as measured by UN’s Food and Agricultural Organization (FAO). In February, the UN’s food price index rose for the eighth consecutive month, to the highest level since at least 1990.

As a result, since 2010 began, roughly another 44 million people have quietly crossed the threshold into malnutrition, joining 925 million already suffering from lack of food. If prices continue to rise, this food crisis will push the ranks of the hungry toward a billion people, with another two billion suffering from “hidden malnutrition” of inadequate diets, nearly all in the developing countries of Africa, Asia and Latin America.

That deprivation will shorten lives and stunt young minds, hitting the most vulnerable populations, such as the urban poor of food importing countries–in cities like Cairo, Tunis and Dhaka – hardest. The poor spend more of their budgets on food–50 to 80 percent of household income in some developing countries, compared to less than 10 percent of household income on average in the U.S. and Europe. So the food price hike cuts deeply into their spending on other needs, and into already strapped budgets of poor countries trying to provide food aid to their citizens.

Some of those urban poor have not been quiet since prices began rising again. They waved loaves of bread as they joined in protests in Tunis, Cairo and other cities in recent months. Their immediate, concrete grievance added a spark to long smoldering discontent with authoritarian regimes, producing the beginnings of democratic revolutions, not just the usual, unsettling “food riots.”

But beyond those movements for democracy, the world will also need to adopt a new model for food and agriculture policy to prevent future food crises, which seem highly likely if current conditions continue. The core cause of the current crisis, like the one three years ago, is failed policies, not bad harvests and disastrous weather. (And it’s worth noting that part of the intensity and unusual patterns of that weather results from flawed environmental and energy policies.)

Nightmarish weather during the last year -from floods in Sri Lanka, Pakistan and Australia to droughts stretching from Russia and the Ukraine to Argentina and now China – set off the hike in grain and food prices. But even if natural phenomena like La Nina in the Pacific played a role in weather that depressed crop yields, global warming has intensified weather extremes and disrupted regional weather patterns. No one event can be blamed on climate change, says University of California at Berkeley visiting scholar Raj Patel, author of Stuffed and Starved, but “we can certainly say climate change is responsible for exacerbating and causing more severe weather problems.”

In October, the FAO Committee on World Food Security concluded that climate change will ultimately affect “the livelihoods, food security, and way of life of billions of people.” In recent decades, “hydrological disasters” have increased an average of 7.4 percent each year, and even faster over the past few years. The FAO study projects that the number of people affected, the loss of arable land, the incidence of harmful pests, and the risk of hunger as a result of climate change will rise rapidly in the next few decades, and crop and animal productivity will “suffer.”

While harvests have suffered, demand for food grains globally only increased 1.2 percent last year, according to Jawaharlal Nehru University economist Jayati Ghosh, even taking into account a growing population, higher incomes and changing tastes in food in countries like China. The diversion of 40 percent of U.S. corn into biofuel annually, an unsustainable long-term strategy for a variety of reasons, may have pushed prices up some.

But the biggest factor in the current crisis is not increasing demand but lower production. At the same time, hunger is currently a result of poverty and inequality, not lack of food.

Ultimately, the food price crisis stems only in part from an imbalance of supply and demand. More importantly, it grows out of decades of bad policy that subordinates food as a commodity to global markets that are dominated by large multinationals and distorted by speculators. Yet the dominant multilateral elite–mainly U.S. and European officials from governments, corporations and international financial institutions–still prescribes more trade and less encumbered markets as the solution.

By contrast, many countries, civil society groups, environmentalists, advocates for the poor, and representatives of peasants and small farmers say that food should be treated as a human right. And countries should strive for food security and as much self-sufficiency as can be reasonably achieved, as Karen Lehman, former senior fellow at the Minneapolis-based Institute for Agriculture and Trade Policy, argues.

In one recent dispute, free traders criticized Russia for halting wheat exports last year after drought and fires reduced wheat crops so drastically that the country might have faced shortages. The ban undoubtedly created anxieties that pushed up wheat futures prices. But food security advocates note that people rightfully expect their governments to protect their food supply. Food policy must permit them to do so (as global trading rules still do to some extent).

Over several decades, the global grain trade, especially the dumping of subsidized crops from the United States and Europe, depressed peasant incomes in developing countries and accelerated their leaving the land for life – and usually a different kind of poverty – in the city. (Mexico after NAFTA is a prime example. South Korea’s development strategy of raising rural incomes while industrializing offers an impressive contrast.) The result: less self-sufficiency, less security and grain prices that were often lower but much more volatile than they would have been with more of a managed trade system.

Free trade and domestic deregulation have meant “that changes in world prices are, for the most part, being transmitted more rapidly and more fully to domestic markets,” the FAO committee reported in October. Global availability of cheap food may help a country relieve problems of a moderately bad domestic harvest, but disruption in a major exporter also transmits a big jump in prices around the world. The increased volatility “threatens farm viability (low prices), food security (high prices), undermines investment decisions, and threatens domestic security and political stability,” the committee says.

One group of economic actors loves that volatility: traders in futures markets, both in open exchanges like the Chicago Board of Trade and private over-the-counter contracts. “Traders make money out of price volatility and now help to exacerbate it,” Patel says. But futures markets, when closely regulated, also enable both buyers and sellers to hedge against uncertainty of future prices, locking in delivery of a product at prices that are acceptable or at least known. Speculative traders provide liquidity for the markets, making transactions simpler and faster. The futures markets also help “discover” prices.

But futures markets are not the only way to bring predictability to agricultural markets. Historically they have worked best when combined with government policies to manage supply and thus prices of commodities within a certain range, partly by maintaining reserves of key food products. Since the rise of the first urban states, governments have maintained reserves of grain as protection against bad harvest. But contemporary versions of such policies, dating in the United States from the New Deal, lost force over the past four decades, and were virtually abandoned in the 1996 “freedom to farm” legislation, signed by President Bill Clinton.

Today, China is one of the few countries that does maintain large reserves, though their size is secret. Going into this crisis, known world stocks of commodities were low, especially for corn, says Gerald Bange, chair of the U.S. Department of Agriculture’s World Agriculture Outlook Board. Private firms held much of the world’s reserves. “The big picture about rising food prices is that one of the things that globalization has done is to increasingly put food reserves in private hands,” says Tim Wise, policy research director for Tufts University’s Global Development and Environment Institute. “You get speculation and hoarding if people feel there’s a shortage of supply.”