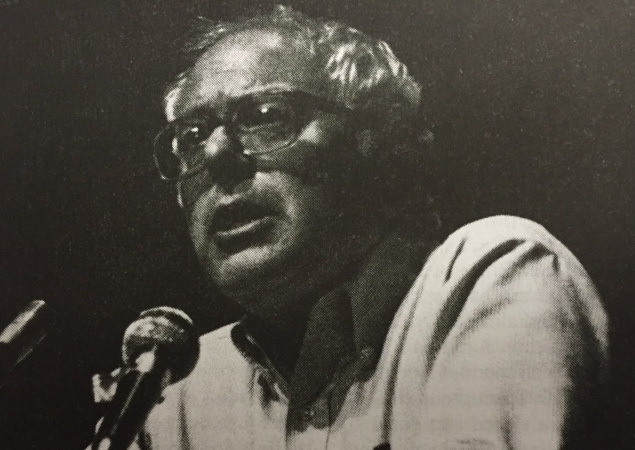 Even back in 1995, Bernie Sanders was already railing against neoliberal policies.

Bernie Sanders in 1995: A Brutal Assessment of Bill Clinton’s First 2 Years as President

In this 1995 column for In These Times, Bernie Sanders laments then-President Bill Clinton’s ties to corporate money—and lays out a progressive program that looks strikingly similar to his own 2016 presidential platform.

At a time when the richest 1 percent of the population owns more wealth than the bottom 90 percent, when corporate America and the wealthy have enjoyed huge tax breaks for the last 20 years, and when the federal, state and local tax burden has increasingly fallen on the middle class, we must adopt a progressive tax system that is based on one's ability to pay.

Written in January 1995, this never-before-published-online article by then-Rep. Bernie Sanders (I-Vt.) assesses the first two years of Bill Clinton's presidency, taking Clinton to task for not pushing hard enough for progressive goals including raising the minimum wage and economic stimulus spending. Sanders explains why, under Clinton, there was “virtually no organized and effective opposition to the American ruling class,” and criticizes the former president for his focus on welfare reform, crime and free trade as ways to “placate corporate America.”

Before we can analyze Bill Clinton's presidency and its prospects, we must discuss the social context in which the Clinton administration is currently functioning.

For the vast majority of its people, the United States is becoming a poorer country. The standard of living of the average American worker continues to decline, people are working longer hours, and new jobs are often low-wage, part-time and without benefits. The average American is nervous and angry—and has every reason to be.

The rich are growing richer—and the power they hold over the economic and political life of the nation makes them ever more arrogant as well. No apologies are needed when millionaires and billionaires spend vast sums of money to buy elective office. No apologies are made when striking workers are permanently replaced. No apologies are even expected when profitable corporations “downsize” their workforces and replace full-time employees with “temps.” The wealthy have the power, and are fully prepared to use it for their own selfish ends.

Never before in American history has the mass media's construction of reality been so divorced from the experience of the average American. Workers see with their own eyes the jobs in their communities being exported to Mexico and China, while television gives them endless hours of the O.J. Simpson trial. Working people see with their own eyes the corporate CEO earning 150 times as much as the line worker, while television gives them rapt descriptions of the Dallas Cowboys' offensive strategy.

On those occasions when political ideas manage, to fight their way into the mass media, they are almost always taken straight out of a rightwing catechism. Nowadays, the media and the political right are fronted by an interlocking directorate of conservative ideologues. Just a few years ago radio talk shows were supposed to at least make a pretense of non-partisanship. Now nobody is even surprised when Rush Limbaugh is made an honorary member of the Republican freshman class in the House. Nobody is shocked that political commentator Pat Buchanan was a Republican candidate for president (as was Pat Robertson). Nobody thinks twice about the fact that convicted felon and Watergate conspirator G. Gordon Liddy is a major talkshow host.

For these and other reasons, there is virtually no organized and effective opposition to the American ruling class. Tens of millions of Americans, including almost all of the poor, no longer believe that government or politics is relevant to their lives. In the recent election that gave the Republicans their “mandate,” 62 percent of the American electorate did not vote. In another country, this turnout might be interpreted as a successful boycott against an illegitimate and unresponsive government. Within this context, let us take a brief look at Bill Clinton's record over the last two years, and discuss some ideas concerning the remainder of his term.

First, serious progressives have no reason to be “disillusioned” with Bill Clinton, or to accuse him of “selling out.” Bill Clinton is a moderate Democrat, a founder of the conservative force within the Democratic Party known as the Democratic Leadership Council (DLC). As governor of Arkansas, and during his campaign for president, he made no secret of the fact that “welfare reform,” “crime” and “free trade” were major tenets of his program.

If anything, progressives should be astonished that a moderate Democrat like Clinton could bring himself to raise taxes on the rich, and lower taxes—through an expansion of the earned income tax credit—on the working poor. It was certainly a pleasant surprise when Clinton took military action in support of a popularly elected government in Latin America—as he did to restore Jean-Bertrand Aristide to power in Haiti—instead of bolstering right-wing elites. And after 12 years of Reagan and Bush, it has also been a welcome change to see a president who is pro-choice and who, however ineptly, has tried to remove some of the restrictions on gay men and women in the military.

Has Clinton been a better president than Reagan or Bush? Yes. Have his policies begun to seriously address the enormous problems facing our nation? No. Has he tried to build a political movement that would empower working people so they could make real improvements in their lives? Absolutely not.

Clinton and his party depend on corporate money and the support of wealthy donors, so it shouldn't surprise us that he would want to placate corporate America with NAFTA, GATT and special trade status for China. We should not be surprised that the president has refused to lead the effort for real campaign finance reform. And we should not be surprised that his health care initiative, which finally placed the American health care crisis at the top of the national agenda, was in fact developed and supported by the largest health insurance companies in the country.

I expect that the Progressive Caucus of the House, which I chair, will soon be meeting with the president once again. Let me briefly touch upon some of the proposals that a number of us will be asking the president to support. Many of them are ideas that we have discussed with him and his administration before.

•The president should push for a serious economic stimulus/jobs program, progressively funded, to put Americans back to work rebuilding the physical and human infrastructure of our country. It is absurd that millions of workers are unemployed or underemployed when there is enormous work to be done rebuilding our bridges, railroads, sewer systems, affordable housing, libraries, schools and roads. We must also put Americans to work providing the child care, preventive health care and education that is so desperately needed.

•The administration must engage in a total rethinking of our disastrous trade policy, which has cost us millions of decent-paying manufacturing jobs, and which is currently running up a $150 billion trade deficit. NAFTA, GATT and liberalized trade rules with China are a mistake, and must be renegotiated. Corporations must no longer be allowed to throw American workers out on the street so they can wring higher profits out of desperate Third World laborers.

•It's well past time to press Congress for significant decreases in military spending. With the end of the Cold War, it is insane to increase the defense budget, when, in fact, we can make major cuts.

•Sweeping changes in labor law are desperately needed. Workers who wish to join unions must be allowed to do so. We must stop businesses from terrorizing workers and preventing them from forming unions.

•Progressive tax reform is also urgently required. At a time when the richest 1 percent of the population owns more wealth than the bottom 90 percent, when corporate America and the wealthy have enjoyed huge tax breaks for the last 20 years, and when the federal, state and local tax burden has increasingly fallen on the middle class, we must adopt a progressive tax system that is based on one's ability to pay.

We will urge President Clinton to take the lead in explaining to the American people why the “Contract with America” will be a disaster for the elderly, workers, veterans, women, minorities, students, the poor and our environment. And we will ask him to take out his veto pen and to fight alongside us to protect the most fragile and vulnerable people in our society.

Will the president heed our advice? Probably not. He seems not to understand that no matter what he does to please corporate America and the Wall Street Journal, they will still hate him. He seems not to understand that the big money interests who control our economy will not look fondly upon a president who gives them only 75 percent of what they want, when they can have a Republican who will give them 100 percent.

The president needs to understand that his only hope for political survival, and the only strategy for defeating the Republicans, is to rally ordinary Americans under the banner of social justice. Yes, the wealthy control the media and exert a dominant influence over the political and economic life of the nation. But 95 percent of the American people are not wealthy. Clinton's political future, and the defeat of right-wing Republicanism, rests on his ability to understand this simple point—and to make it clear to the ordinary people of this country, that he is on their side.