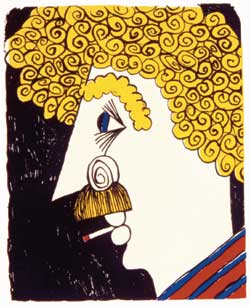 In November, Kurt Vonnegut turned 80. He published his first novel, Player Piano, in 1952 at the age of 29. Since then he has written 13 others, including Slaughterhouse Five, which stands as one of the pre-eminent anti-war novels of the 20th century.

You have lived through World War II, Korea, Vietnam, the Reagan wars, Desert Storm, the Balkan wars and now this coming war in Iraq. What has changed, and what has remained the same?

One thing which has not changed is that none of us, no matter what continent or island or ice cap, asked to be born in the first place, and that even somebody as old as I am, which is 80, only just got here. There were already all these games going on when I got here. … An apt motto for any polity anywhere, to put on its state seal or currency or whatever, might be this quotation from the late baseball manager Casey Stengel, who was addressing a team of losing professional athletes: “Can't anybody here play this game?”

My daughter Lily, for an example close to home, who has just turned 20, finds herself—as does George W. Bush, himself a kid—an heir to a shockingly recent history of human slavery, to an AIDS epidemic and to nuclear submarines slumbering on the floors of fjords in Iceland and elsewhere, crews prepared at a moment's notice to turn industrial quantities of men, women and children into radioactive soot and bone meal by means of rockets and H-bomb warheads. And to the choice between liberalism or conservatism and on and on.

What is radically new in 2003 is that my daughter, along with our president and Saddam Hussein and on and on, has inherited technologies whose byproducts, whether in war or peace, are rapidly destroying the whole planet as a breathable, drinkable system for supporting life of any kind. Human beings, past and present, have trashed the joint.

Based on what you've read and seen in the media, what is not being said in the mainstream press about President Bush's policies and the impending war in Iraq?

That they are nonsense.

My feeling from talking to readers and friends is that many people are beginning to despair. Do you think that we've lost reason to hope?

I myself feel that our country, for whose Constitution I fought in a just war, might as well have been invaded by Martians and body snatchers. Sometimes I wish it had been. What has happened, though, is that it has been taken over by means of the sleaziest, low-comedy, Keystone Cops-style coup d'etat imaginable. And those now in charge of the federal government are upper-crust C-students who know no history or geography, plus not-so-closeted white supremacists, aka “Christians,” and plus, most frighteningly, psychopathic personalities, or “PPs.”

To say somebody is a PP is to make a perfectly respectable medical diagnosis, like saying he or she has appendicitis or athlete's foot. The classic medical text on PPs is The Mask of Sanity by Dr. Hervey Cleckley. Read it! PPs are presentable, they know full well the suffering their actions may cause others, but they do not care. They cannot care because they are nuts. They have a screw loose!

And what syndrome better describes so many executives at Enron and WorldCom and on and on, who have enriched themselves while ruining their employees and investors and country, and who still feel as pure as the driven snow, no matter what anybody may say to or about them? And so many of these heartless PPs now hold big jobs in our federal government, as though they were leaders instead of sick.

What has allowed so many PPs to rise so high in corporations, and now in government, is that they are so decisive. Unlike normal people, they are never filled with doubts, for the simple reason that they cannot care what happens next. Simply can't. Do this! Do that! Mobilize the reserves! Privatize the public schools! Attack Iraq! Cut health care! Tap everybody's telephone! Cut taxes on the rich! Build a trillion-dollar missile shield! Fuck habeas corpus and the Sierra Club and In These Times, and kiss my ass!

When it became obvious what a dumb and cruel and spiritually and financially and militarily ruinous mistake our war in Vietnam was, every artist worth a damn in this country, every serious writer, painter, stand-up comedian, musician, actor and actress, you name it, came out against the thing. We formed what might be described as a laser beam of protest, with everybody aimed in the same direction, focused and intense. This weapon proved to have the power of a banana-cream pie three feet in diameter when dropped from a stepladder five-feet high.

And so it is with anti-war protests in the present day. Then as now, TV did not like anti-war protesters, nor any other sort of protesters, unless they rioted. Now, as then, on account of TV, the right of citizens to peaceably assemble, and petition their government for a redress of grievances, “ain't worth a pitcher of warm spit,” as the saying goes.

Responsibility to which society? To Nazi Germany? To the Stalinist Soviet Union? What about responsibility to humanity in general? And leaders in what particular cultural activity? I guess you mean the fine arts. I hope you mean the fine arts. … Anybody practicing the fine art of composing music, no matter how cynical or greedy or scared, still can't help serving all humanity. Music makes practically everybody fonder of life than he or she would be without it. Even military bands, although I am a pacifist, always cheer me up.

But that is the power of ear candy. The creation of such a universal confection for the eye, by means of printed poetry or fiction or history or essays or memoirs and so on, isn't possible. Literature is by definition opinionated. It is bound to provoke the arguments in many quarters, not excluding the hometown or even the family of the author. Any ink-on-paper author can only hope at best to seem responsible to small groups or like-minded people somewhere. He or she might as well have given an interview to the editor of a small-circulation publication.

Maybe we can talk about the responsibilities to their societies of architects and sculptors and painters another time. And I will say this: TV drama, although not yet classified as fine art, has on occasion performed marvelous services for Americans who want us to be less paranoid, to be fairer and more merciful. M.A.S.H. and Law and Order, to name only two shows, have been stunning masterpieces in that regard.

That said, do you have any ideas for a really scary reality TV show?

“C students from Yale.” It would stand your hair on end.

What targets would you consider fair game for a satirist today?