“A Guide to the ‘Snake Fight’ Portion of Your PhD Dissertation” 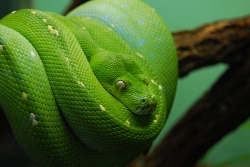 The funniest thing I have read today, from McSweeney's, via Boing Boing:

Q: Do I have to kill the snake?
A: University guidelines state that you have to “defeat” the snake. There are many ways to accomplish this. Lots of students choose to wrestle the snake. Some construct decoys and elaborate traps to confuse and then ensnare the snake. One student brought a flute and played a song to lull the snake to sleep. Then he threw the snake out a window.

Q: Does everyone fight the same snake?
A: No. You will fight one of the many snakes that are kept on campus by the facilities department.

Q: Are the snakes big?
A: We have lots of different snakes. The quality of your work determines which snake you will fight. The better your thesis is, the smaller the snake will be.

Q: So then couldn’t you just fight a snake in lieu of actually writing a thesis?
A: Technically, yes. But in that case the snake would be very big. Very big, indeed.

Rumor has it that Saul Kripke got his PhD by writing, "I defeat this snake" on a cocktail napkin. The serpent fell over dead on the spot.