“The Dark Side of Thomas Jefferson” 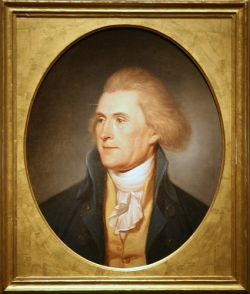 On my first reporting trip to the deep south, I got the Slavery Talk, twice. Slavery was the furthest thing from my mind. I was reporting a political corruption story that, with the exception of some casino-owning Indian tribes, featured an all white cast of characters. Yet somehow, upon learning that I was a journalist from New York City, not one but two white people decided that this was a talk that needed to happen.

Tommy poured me a drink, cleared his throat, and explained that, despite what I may have heard, slavery wasn't as bad as all that. Why, his great-great grandmother owned slaves, and they were better taken-care-of than most free people. I stared at him like he'd whipped out his dick at the dinner table. I was even more surprised when another guy tried to give me the same talk a few days later. Apparently, this was a thing. Why were these guys giving me the slavery soft-sell?

I thought about those incidents as I read The Dark Side of Thomas Jefferson an essay in The Smithsonian by Henry Wiencek about Jefferson's career as a slaveholder and the revisionist history surrounding it. Far from being a reluctant slave-holder, Jefferson treated slavery as a lucrative investment.

Some of the most damning evidence of Jefferson's treatment of his slaves, like records of the beatings they received, were actively suppressed by revisionists and have only recently come to light.

I'm embarassed to admit that I was taken in by revisionist accounts. I imagined that he'd inherited his slaves and only kept them as nominal slaves because he couldn't afford to set them up as free farmers. Obviously, even at that, slavery was an atrocity. I didn't want to consider that the co-author of the Declaration of Independence might have kept slaves out of pure greed.

The most disturbing revelation in this story is that Jefferson didn't just keep slaves to work on his farm. He wrote that his real business model was "the increase" of his female slaves. He was raising human beings to be auctioned off like livestock. Jefferson calculated that the children of his slaves brought in a reliable 4% return per annum. It was a great business, he recommended it to everyone.

In the movies, we know someone's a benevolent slave-holder if they "don't break up families." Well, those are the movies.

The revisionist fiction is that slavery was an unprofitable institution by Jefferson's time. Wiencek explains how Jefferson breathed new economic life into bonded servitude by devising profitable models for slave labor in factories and wheat fields as tobacco farming was being phased out.

Jefferson spurned a golden opportunity to walk away from the slave trade. An old revolutionary comrade willed Jefferson a small fortune to pay for his slaves' release and education, but Jefferson refused, even though he was the executor of the will.

George Washington freed his slaves upon his death, but Jefferson didn't even go that far.

Wiencek's essay was a wakeup call, not just for its revelations about Thomas Jefferson, but for what it said about my own willingness to assume the best about a historical figure I admired.