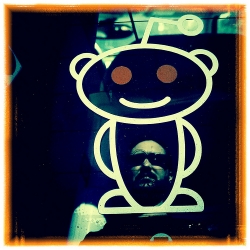 Will Wheaton, CC, for illustration only.

Last week, Adrian Chen of Gawker exposed Violentacrez, Reddit's top troll, and there was much rejoicing. The troll turned out to be one Michael Brustch a programmer for a company specializing in pawn shops and payday loans. Apparently, Brutsch's employer decided he was too exploitative even for a debt peonage operation and summarily fired him. If you read Chen's piece, you'll see why. He was truly the King of the Trolls with an audience of millions.

Emily Bazelon of Slate feels sorry for Brutsch, even though she supports his outing. She's a more compassionate person than I am. She sees his firing as evidence of a mob mentality. I see it differently. Brutsch's bosses fired him because they didn't want the internet's leading purveyor of creepshots on their payroll. It was a simple matter of accountability.

No sooner had Brutsch been outed than fanboys started bleating about how it was unfair to expose him because what he was doing was perfectly legal. Which it largely was. The law, as they say, is a blunt instrument. It's easy to forget because it's so pervasive, but most antisocial behavior is held in check by social, rather than legal sanctions. Jerks don't get asked back. Liars and promise-breakers are shunned. The tactless get dirty looks. The indiscreet get elbowed.

In practice, our legal freedom to speak our minds is constrained by our accountability to the people around us. They know who we are, they know where we live, they will kick us under the table when we get out of line. In real life, we only have one body connected to one name, and we've got to weigh the satisfaction of speaking our minds against the long term effects on our reputations and relationships.

This is a pretty elegant system, albeit an imperfect one. It puts the "society" in "free society." In real life, we have the legal right to say pretty much whatever we want, but we are enmeshed in a network of social checks and balances that keep us accountable for our speech. Nobody can force us to shut up, but lots of people can make their displeasure known to us. It's a good balance that allows people to share ideas freely without rending the fabric of the community.

Pseudonymity is great because it allows people to speak without the usual constraints, but it can also be terrible for the same reason. As ViolentAcrez, Michael Brutsch opted out of all social controls on his speech and ran amok. He could say things he would never have said under his real name because they're rightly regarded as horrifying. Until recently, he didn't have to live as that Hitler/Misogyny/Creepshot Guy (all subreddits he started). He didn't have to endure his neighbors crossing the street to avoid him.

As ViolentAcrez, Brustch could brush off complaints and criticism as long as he kept his online and offline reputations separate. He generated plenty of criticism on Reddit. His contributions made it to the front page as often as they did because so many users rushed to denounce him. But the community was powerless to make him stop.

As long as Brutsch remained pseudonymous, Reddit could opt out of responsibility, too. Even though he was an unpaid functionary of the site, they could still act as if they weren't responsible for his behavior. They could maintain the fiction that he was just some guy on the internet. Who knew? Who cared? Once Chen put a name to the pseud, Brutsch's cozy relationships with the top brass at Reddit came into focus.

Online pseudonymity is largely a social courtesy. We all agree not to reveal the pseudonyms of the people we meet online, even though we probably could. A pseud is like showing up at your local with a paper bag over your head and insisting that nobody knows you. In fact, they know perfectly well, or they could easily find out; and either people play along, or they don't. The difference between a bar and the internet is that the internet has developed a social norm against outing. That's a good thing.

Respect for pseudonymity is important. Courtesies are the lubrication that make social interaction possible. Without this norm, many important voices would be lost. People would be afraid to share their political opinions and personal experiences. So, those of us who care about a thriving online community have every reason to take this norm seriously and insist that others around us do likewise.

We should shun people who frivolously or maliciously reveal the identities of others. We should ostracize those who out others to settle personal scores or silence dissenting views. It's cruel, it's destructive, and it's wrong.

However, sometimes it's necessary to out a bad actor in order to stop him from hurting other people. Michael Brutsch was doing just that and there was absolutely no other way to make him stop.

Ironically, the creepshots for which Brutsch is infamous are among the less objectionable materials he disseminated. At least creepshots snapped by creeps in public are technically legal, though morally reprehnsible. Until Reddit reluctantly shut down the Jailbait subreddit, Brutsch was also trafficking in the stolen facebook pictures of children and broadcasting them to a potential audience of hundreds of hundreds of thousands.

Brutsch's audience was so large that some of his creepshot and jailbait victims were bound to be recognized by people they knew. Some fanboys have argued that creepshots are a victimless crime because the targets often don't realize that they've been creepshot. But we'll never know how many women have faced ridicule or even violence after being recognized in a creepshot or a jailbait pic. We'll never know how many women have been fired from their jobs, or not hired because of something Brutsch posted.

As a photographer and a civil libertarian, I feel strongly that public creepshots should remain legal. I don't see how we can legislate against them in a way that preserves a photographer's right to take pictures in public. But creepshots are not victimless. In addition to the harm to individuals, the trend impinges on every woman's freedom because you never know who might be lurking with a cell phone camera on your subway car. That's why we need strong social controls to discourage this profoundly antisocial behavior.

Mores have to keep pace with technology. In this age of tiny cameras and internet connections, we need an ironclad norm that You Do Not Creepshoot. We have to enforce this norm through our free speech rights, because the law is not an appropriate tool for this job. The norm should be that if you disregard women's dignity and privacy by posting creepshots, we'll disregard your pseudonymity.

Even if creepshots are legal, unmasking Brutsch opens the door to other legal recourse. On top of everything else, he was flagrantly violating copyright by reposting photos stolen from facebook. Now that he's unmasked, I hope he gets sued by some of his victims. Unmasking him was necessary for his victims to seek justice. As isolated teenage girls, they were unlikely to figure out who had stolen their pictures on their own, but Adrian Chen has given them the opportunity to fight back. Brustch wasn't making money but Reddit is ostensibly a for-profit company. As Chen explains Brutsch was building traffic for Reddit while legally insulating the higher ups by culling obvious child porn from the site's NSFW zones. They even made him a "pimp hat" badge to mark his special status on the site. At least Reddit has deeper pockets than a recently unemployed programmer for pawn shops.*

When someone is abusing pseudonymity to materially hurt other people, and there's no other way to make them stop, "outing" may be an appropriate last resort. In extreme circumstances, we rescind the usual social courtesy of ignoring the person's identity. Virtual communities are real communities, too. On the internet, we need a network of social checks and balances akin to the one we enjoy in the real world.

A lot of people are uncomfortable with this idea because they fear that the principle will be abused to out innocent people. No doubt that's true. But unless you want to argue that nobody should ever be outed for any reason, you're faced with the difficult task of articulating when it's appropriate to lift the veil. That's the nature of informal social controls, they get applied by regular people, with varying degrees of fairness and accuracy. People need to understand the nature of online pseudonymity and decide whether they want to put themselves out there.

Pseudonymity is an important courtesy that we extend to each other, not a moral or legal right. When we speak in real life, we weigh the value of expressing ourselves against the potential consequences. Pseudonymous writers have to make the same calculus. They've insulated themselves from criticism and social stigma, but they haven't created an artificial consequence-free speech zone around themselves just by using a pseud.

*Update: A sometimes pseudonymous lawyer friend tells me that the grounds for a lawsuit for copyright infringement via Facebook are a lot weaker than I thought, thanks to some dodgy language in Facebook's terms of service, but zie adds that there might be other grounds for a lawsuit, such as defamation or invasion of privacy. My friend is more optimistic about the possibility of criminal charges against the creepshooters who crouch to peer under skirts, because many jurisdictions have laws against the peeping itself. Whatever legal avenues the victims may have at their disposal, they can't even get started until they know who the perp is and what state he lives in. That's one reason why it was necessary to expose Brustch by name instead of simply reporting on his bad deeds.