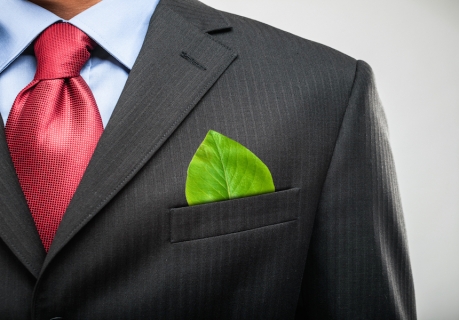 No longer relying on the efficacy of state and federal environmental laws—regulations often penned by the very industries they're intended to hold accountable—or the ability of the non-profit environmental establishment to protect their interests, people in communities across the country are asserting a constitutional right to local self-government when it comes to protecting themselves from the environmental hazards of outside development.   Minerva Studio / Shutterstock

In the 2011 film Moneyball, the Oakland Athletics baseball team is perennially short of money, and thus always being beaten by richer teams in the playoffs. Knowing that they can never compete dollar for dollar, A’s general manager Billy Beane (played by Brad Pitt) realizes that they’ll never get to the World Series unless the team changes how it plays the game.

In one memorable scene, Beane explains to his baseball scouts that they need to draft players who statistically can get on base, rather than picking them the way other, more wealthy teams do—by the “look” of a player or how he swings a bat.

You would think that because the scouts want the A’s to win the World Series as much as Beane, that they’d be on board with a strategy that would increase their chances of getting there.

Instead, the scouts prove more interested in avoiding looking foolish to their scouting peers at other teams, than in breaking from tradition. They’d rather the A’s continue to lose and maintaining their own professional standing in baseball, than pioneer a new approach that changes the existing rules under which their team currently cannot win.

Beane was left with no other choice than to fire his scouts, because they were unwilling, in fact, unable to recognize the existing system for what it was and work to build something new.

So, what does all of this have to do with communities across the United States that have begun to protect themselves from drilling by the world’s largest oil and gas corporations?

As it turns out, everything.

The Power of Big Green

Just like the scouts in Moneyball, for decades the strategy of big environmental groups and their lawyers (“Big Green”) has been stuck in first gear, focused on trying to protect the natural environment from preying oil and gas companies by trying to “better regulate” how oil and gas is extracted. Those groups have involved local communities affected by oil and gas extraction by getting them to write letters, sign petitions and generally beg and plead with government regulators to protect them.

As with the scouts in Moneyball, however, there’s one problem with their strategy: It doesn’t work.

Indeed, a recent study determined that we are in the midst of the sixth great extinction of life on earth, and the United Nations has declared that we’re heading toward “major planetary catastrophe.”

It’s not because we haven’t been sending enough letters to Congress, submitting enough public comments or having enough people testify at EPA hearings.

Rather, it’s because our activism has failed to confront the basic premise of how our environmental laws actually function—that rather than protect the environment, they instead regulate its exploitation, and thus legally authorize the very harm Big Green and communities have been trying to stop. Trying to make these regulations a little bit better doesn’t stop the destruction from happening. Those changes may slow it down or delay it, which is a good thing, but they fail to address the overarching problem that under our existing environmental legal framework—mirrored by laws around the world—we cannot protect the environment.

What do we mean when we say that environmental laws regulate the use of nature? With fossil fuel extraction, for example, there are state oil and gas laws that regulate how oil and gas is extracted. Enacted by state legislatures—but mostly written by the corporations ostensibly regulated by those laws—they authorize fracking and other extraction practices, establishing permitting programs which literally permit corporations to conduct these activities.

And as communities across the country are learning, even when we better regulate shale gas drilling, we’re still getting fracked.

Within this existing framework of environmental laws that legalizes fracking, mining, factory farming, logging and so on, “we the people” utterly lack the legal authority to decide what happens where we live. Our fate lies with regulatory agencies, rather than our own communities. So, when it comes to resource extraction and other corporate projects that exploit the environment, we are currently powerless to stop them.

Conventional environmental advocacy works within these confines. It assumes that affected communities are legally powerless to say “no” to fracking and other extraction—no matter the environmental harm such practices bring.

If we accept that premise, we are rendered utterly dependent upon a state and federal political system which, in large part, can’t be untangled from the very corporations it ostensibly is supposed to restrain.

Much like the scouts for the Oakland A’s, Big Green groups continue to operate within that conventional box, even though by working inside it, the environment loses. These groups are able to leverage short-term victories into fundraising campaigns and curry political favor in the halls of Congress. Many even enter into agreements with oil and gas corporations to provide for buffer zones, regulation of noise levels and disclosure of chemical cocktails. As if telling us how our water is being poisoned will actually protect it from being poisoned.

But such a system does not work for the communities under siege from oil and gas corporations, nor does it address the root causes of why we’re not able to protect the environment. Communities have trusted Big Green to be their advocates on Capitol Hill and in state legislatures. Yet, time and again they’ve had to listen to these groups tell them that what they want—which is control over their own destinies—isn’t politically practical.

If we don’t, we must resign ourselves to constant losses, endless arguments over how many parts per million of frack chemicals should be allowed in our water and relegating ourselves to documenting the endless poisoning of the planet.

And we better get comfortable sharing the dugout with the scouts of the old Oakland A’s—going through the motions as cogs in a wheel, but never dreaming about a new system in which our governments are designed to actually protect the rights of both human and natural communities.

Recognizing Community Rights and the Rights of Nature

Fortunately, some communities have already fired Big Green. Tired of endlessly losing the fights that matter, they’ve turned their backs on regulatory agencies and legislators, and have begun to assert a constitutional right to local, community self-government to protect themselves and nature. This is occurring in two ways.

First, communities have begun to ban oil and gas extraction as a violation of their community right to clean air, clean water, and a sustainable energy future. They’ve determined that the extraction and burning of fossil fuels cannot be allowed to continue, not just because of air and water pollution, but because their use threatens our very global survival.

Second, communities have begun to recognize—through their laws—that nature has rights of its own.

For thousands of years, nature has been treated as a “thing”—the result being that the more nature you own, the more you can legally destroy. By treating nature as “property,” our environmental laws merely seek to regulate how that property is used. Transforming nature from being a thing, to having rights, means imposing limits on nature-damaging human actions, while providing legal tools to defend and enforce those rights.

Far from being pie in the sky, laws incorporating these principles have been adopted across the United States. From Barnstead, New Hampshire, to Mora County, New Mexico, to Pittsburgh, Pennsylvania. Close to 200 communities—both liberal and conservative—now live under these laws.

In Colorado, in what has become the epicenter of the fracking wars, a coalition of communities has joined together at the state level to create the Colorado Community Rights Network. In 2014, the Network proposed the first Community and Nature’s Rights state constitutional amendment in the country—an amendment that would recognize the constitutional right of communities to enforce and protect their own rights, as well as the rights of nature. Due to an oil and gas lawsuit that was taken all the way to the Colorado Supreme Court, the Colorado Community Rights Network lacked sufficient time to qualify their 2014 amendment, but are currently organizing to qualify it for the 2016 general election.

Building Toward a New Future

None of this comes easily, of course. We’ve become stuck in an endless cycle of activism that validates and supports the current system, and we have accepted our powerlessness within it. It is a system that will not change until our activism stops coloring only inside the lines.

We can either help birth a new kind of activism or we can take steps to ease the death of the planet. We can’t do both.

If we’re willing to dream about another future, it’s time to stop running around the hamster wheel of conventional environmental activism, and instead fire Big Green and get on with the business of building the new world that we know is not only possible, but absolutely necessary.