Factory Farm Runoff Is Polluting Lake Erie, But CAFO Sewers Are Not the Answer 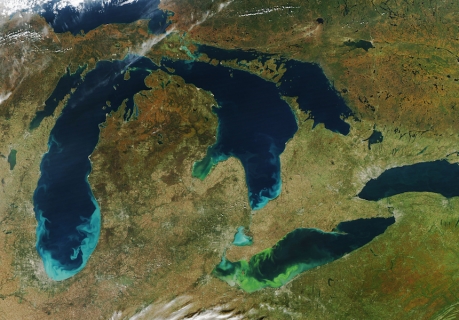 The Great Lakes—Superior, Michigan, Huron, Erie, and Ontario—are magnificent inland seas that were once as clear as rainwater. Now each is polluted, but Lake Erie, the smallest, by volume, is in the most trouble. Its western basin is heavily industrialized, but the lake’s greatest threat is from the massive influx of organic material from fertilizer runoff, and the urine and feces from large concentrations of animals in factory farms. These nutrients don’t belong in the lake’s aquatic ecosystem. They kill fish by snatching up oxygen as organic material decays and cause toxic algae blooms. If unchecked, excess nutrients can change the ecosystem so much that the lake no longer supports aquatic life.

Sandy Bihn, the executive director of the environmental group Lake Erie Waterkeeper, has been working for decades to clean up Lake Erie. She’s been doing yeoman’s work, but she got it wrong when she told the Toledo Blade in July that in order to clean up the lake, farm animal waste will have to be industrially treated like human waste.

Excreta from confined animal feeding operations (CAFOs) and fertilizer runoff, primarily from nitrogen-based petrochemicals, are both rooted in industrial agriculture, and both are best addressed by changing agricultural practices, not by borrowing techniques from the fundamentally dysfunctional sewage treatment industry to “clean up” massive nutrient loads.

Sewers are a health and environmental disaster. At great cost to natural resources (freshwater) and public funds, they have moved human excreta, industrial waste, road runoff, and hospital discharges from one place to another: away from homes and businesses to receiving bodies of water. The historical public health benefit of moving human excreta away from people, and so curbing cholera, dysentery, typhoid, and other diseases caused by pathogens that live in our guts and travel in water, is unassailable. But we have swapped these enteric diseases for others with slower mechanisms of physiological dysfunction, such as Parkinson’s disease and cancer.

Today, with the most “advanced” wastewater treatment afforded by industrialized nations, all of the receiving bodies of water—lakes, rivers, streams, and oceans—are affected by nutrient and chemical pollution from sewage outfall. The “best available technology” in wastewater treatment plants has not changed much since the early 20th century, but the inputs have: hundreds of thousands of chemicals—like nanomaterials, perflouorinated compounds (PFCs), pharmaceuticals, brominated flame retardants, perchlorate, and pesticides. As for the output? Our waters polluted by billions of gallons of nutrient-rich, chemical-laden wastewater—with some bacteria killed by an enormous amount of chlorine added before discharge—and sewage sludge, an always toxic end-product of wastewater treatment.

CAFO wastes are not “manure.” The term manure has been used for millennium to connote an agriculturally essential fertilizer from animal excreta. It's always been associated with proper scale. Large industrial farms with thousands of confined animals are a new system outside of that scale.

Lake Erie has a problem. But the way to address it is not by helping the industrial entities that have a hand in its origins continue with business as usual. Establishing sewers for CAFO waste will only make it easier for agribusiness to add more animals to a bad system while concentrating the nutrient load and pharmaceuticals (such as antibiotics widely used in industrial animal operations) to then put back into the lake after expensive and ineffectual “treatment.”