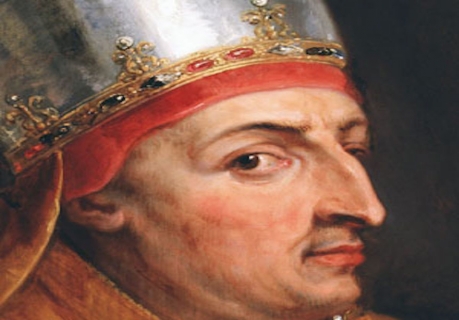 (In the later years of his papacy, Pope Nicholas V issued a series of bulls which sanctioned the attack, conquering, subjugation and enslavement of pagans and other enemies of Christ "wherever they may be.")   Image: Wikipedia

With his U.S. visit approaching, Pope Francis must be praying for guidance on how to respond to the growing demand for official withdrawal of three papal bulls—legal instructions from 15th century popes—that migrated into U.S. law after the American Revolution. Known as the Doctrine of Discovery, these instructions authorized European “discoverers” to seize the lands and subjugate the peoples found in the Americas and use their labor to extract riches for the wealthy. It set up the very problems that Francis’ environmental encyclical Laudato Si’ aims to solve. Here are my five suggestions for him, with a little background first.

When Laudato Si’ looks to traditional church teachings to find an “integral ecology” based on an interconnected web of life, it seems attuned to an indigenous worldview that honors all beings as belonging to Mother Earth. In exhorting us to a certain ecological sanity with special concern for the poor, Francis’ message reaches out to Indigenous Peoples, who make up one-third of the world’s poorest, though only 5 percent of world population.

Indigenous peoples have suffered over 500 years from intentional decimation of persons, communities and lands, accompanied by forced assimilation into a culture that insults and ridicules their most cherished ethical principles. In the process, by operation of these bulls over time, they are not the only ones who suffer. The entire planetary web of life is being devastated by massive extraction and dumping for profit. Laudato Si’ wants to bring forth a new paradigm that will heal this twin tragedy, but the irony is that the old paradigm finds its roots in these very papal bulls. Traditional indigenous scholars and elders have been asking for papal revocation for over 30 years, to no avail. Francis would be wise to get on with it, without delay.

When explorers sought distant lands to expand their kings’ empires, they were acting under the legal authority of Francis’ predecessors in office, who granted perpetual sovereignty over lands and Indigenous Peoples for the purpose of extracting resources and making converts. U.S. systems of property law and Indian law are derived directly from the bulls through an 1823 U.S. Supreme Court decision, Johnson v. M’Intosh, which used the bulls to justify the federal government’s theft of Indian lands for resale to immigrants for production and profit. This “Doctrine of Discovery” was based on ignoring the presence of Indigenous Peoples in the “discovered” Americas, as though they did not exist, because they were “other” than European Christians. This M’Intosh decision, unbelievably, is still in force today.

We know from Winona La Duke and others that Indigenous Peoples traditionally view their relationship with nature as belonging to lands that belong to the Creator. But the United States drove them off and gave to immigrant homesteaders the human ownership of these lands and of all that their labor could make that land produce—even if it meant that this production destroyed the land. Such was the legal structure that emerged, and from which the planet now suffers because we have exported the old M’Intosh paradigm far and wide.

The planet is worse off now than ever. Francis calls on all of us, practicing Catholics or not, to fashion a deeper and more effective, structural transformation in ethics and law. It’s a timely and necessary call; here are five ways he can strengthen it by addressing its implicit ironies.

He could begin on September 23 at the White House by acknowledging President Obama’s 2010 commitment to official U.S. endorsement of the 2007 United Nations Declaration on the Rights of Indigenous Peoples. This step pledges the United States to the planetary ethic of providing sufficient sovereignty for Indigenous Peoples to protect their ancestral lands and future generations by exercising free, prior and informed consent before any mineral extraction or other insult occurs. As chief executive officer, the President could even transfer the administration of Indian policy from the Department of Interior to the Department of State, which is responsible for implementing treaties.

Next, Pope Francis may feel caught in an undertow of the Laudato Si’ wave when he faces the Canonization Mass of Junipero Serra. Serra was an 18th century Spanish Franciscan priest who built the California mission system on the backs of Indigenous Peoples, ambivalent converts who suffered cruel punishment if they tried to escape. Francis could cancel or delay the canonization or, at the very least, explain that the church cannot make converts by insulting and trying to eradicate another group’s religion. He might even announce that he will meet privately in a mutual listening session with traditional (as distinct from converted) indigenous elders, before he returns to the Vatican.

When Pope Francis addresses the U.S. Congress on September 24, he could lead by example by finally renouncing and withdrawing the three 15th century papal bulls implicated in the Doctrine of Discovery. Numerous faith communities have urged him to do this. It is something only he can do, because he occupies the office that issued them. It would repudiate the paradigm of domination over nature and Indigenous Peoples that migrated directly from these bulls into U.S. law. It could show our current civil lawmakers how a prominent leader of a worldwide organization takes official action to root out centuries of systemic injustice.

With this paradigm-shifting step behind him, on September 25 at the UN General Assembly, Francis could make his best effort yet to wake us up from our cultural trance in time to avert the worst of the ecological catastrophes already in progress. He could make a credible plea to all nation states to adopt some form of new paradigm of human restraint to allow nature to restore, heal, and flourish—and for all decisions to be constrained by their ultimate impact on the next seven generations of all species.

Returning to his faith community in Philadelphia at the World Meeting of Families, Francis can emphasize the importance of supporting the right of immigrant families and environmental refugees—a large number of whom are indigenous peoples—to stay together as families—announcing, as well, a transparent investigation of the role of the Catholic Church in removing family life and cultural identity from indigenous children during the boarding school era.

As he gathers moral courage to take these five opportunities to demonstrate his capacity for listening and responding, he may wish to express gratitude to the Piscataway and Lenape nations on whose ancestral lands he is making this historic visit. By officially revoking the 15th century bulls, he will honor the enduring legacies of all Indigenous Peoples and decisively turn away from the inherited paradigm that caused and perpetuated genocide, ethnocide and ecocide.

Thus he may clear the way for Laudato Si’s new paradigm of love for the planet and for the poorest of the poor.

Libby Comeaux is a lawyer currently representing Colorado activists who enact transformation close to home. She served as volunteer drafting support for the 2014 Leadership Conference for Women Religious (LCWR) resolution in solidarity with indigenous requests for revocation of the Doctrine of Discovery, https://lcwr.org/social-justice/doctrine-discovery.