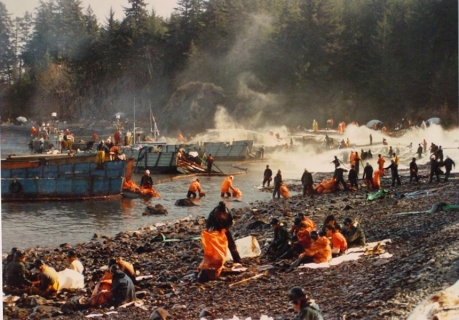 In March of 1989, a crew works to clean up the Exxon Valdez oil spill.   (Jim Brickett / Flickr / Creative Commons)

On March 24, 1989, the oil tanker Exxon Valdez struck a reef and spilled over 20 million gallons of crude oil into Alaska’s Prince William Sound. Considered one of the worst environmental disasters in U.S. history, the spill decimated wildlife populations while destroying local fishing and tourist economies. Even today, an estimated 23,000 gallons of Valdez crude oil sits in Alaska’s sand and soil, and some scientists estimate that effects from the spill will be felt for more than 30 years.

Following the disaster, a lawsuit was filed by over 38,000 commercial fishermen and native Alaskans seeking compensation for their losses. As part of their claims, they also sought to punish Exxon for its negligence in causing the spill, and asked the court to award punitive damages.

Almost five years after the original spill, in 1994, a jury awarded the plaintiffs $5 billion in punitive damages.

Instead of paying the award, Exxon appealed, first to the 9th Circuit Court of Appeals and then to the U.S. Supreme Court. In both Courts, Exxon argued that the corporation’s due process constitutional rights, under the 5th and 14th Amendments to the U.S. Constitution, were violated by the “excessive” jury award of punitive damages. Agreeing with Exxon that its corporate rights were violated by the damage award, both courts reduced the award from $5 billion to a little over $500 million.

The journey was well worth Exxon’s time—not only did it delay the ultimate judgment for over a decade, the corporation also managed to reduce its punitive damages by $4.5 billion.

Exxon wasn’t the first corporation, of course, to evade jury awards by shielding itself with its corporate constitutional “rights.” Beginning in the 1950s, corporations and their lawyers began advancing the legal doctrine that corporate due process rights could be used to defeat large punitive damage awards. Their quest culminated in 2003, when the U.S. Supreme Court adopted their arguments and, in State Farm Mut. Auto. Ins. Co. v. Campbell, drew a “line of constitutional impropriety,” which now protects large corporations from certain punitive damage awards.

The problem with this, of course, is not just that the courts generally devise ways to protect corporate assets, but that they have a legal doctrine that they can readily pull off the shelves to do so. That legal doctrine—of corporate “personhood” or corporate “rights”—insulates corporations with constitutional rights, rights that are supposed to belong to people, not corporations.

How corporations wield their corporate rights

Recognizing corporate “rights” comes with real cost—in the Exxon Valdez case, the people’s punishment of Exxon turned out not to be a punishment at all, leaving “we the people” without the ability to deter the same corporate behavior from occurring again.

Unfortunately, Exxon’s use of the corporation’s due process constitutional rights to wriggle off the damages hook is just the tip of the iceberg. By using constitutional rights originally intended to protect people, companies have been able to alter the basic fabric of how our government, the marketplace, and our politics function—to warp that fabric around the corporate form because of corporate “rights.”

Whether it’s corporate 1st Amendment “free speech” rights that are now used to mow down federal campaign finance laws in Citizens United and other decisions, or corporate religious freedom rights that are used to nullify laws requiring contraceptive healthcare coverage in the Hobby Lobby decision, the era of corporate “rights” is now fully upon us.

Today, corporations use their constitutional “rights” to:

As early as 1819, corporations were using their constitutional “rights” to prevent state legislatures from interfering with their operations. Thus, while it’s not a new phenomenon, this latest rush of corporate “rights” has arrived fast and furious. That’s precisely because the groundwork laid by prior corporate law firms—as with the engineering of corporate “rights” challenges to punitive damage awards—is now beginning to pay off, and pay off big.

While calls to “get big money out of politics” and to “make corporations accountable” are rampant nowadays, very few progressive organizations talk about the need to get rid of corporate “rights.” That’s for several reasons, including the fact that many feed directly from the charitable trough provided by corporate money. Indeed, some groups—including the American Civil Liberties Union (ACLU)— actually support corporate “rights,” refusing to see corporate “rights” as any different than individual rights.

The primary reason though that most progressive groups are not advocating to eliminate corporate “rights” is simple: they aren’t willing to shoulder the long-term commitment necessary to drive a multi-generational effort to kick corporations out of our constitutions.

Taking on this kind of work means coloring outside the lines of traditional, conventional activism, which means challenging the basic structure under which current progressive activism operates. Rather than work to change the rules, most progressive groups focus instead on engineering small victories within the system that currently exists.

Ironically, by not challenging corporate “rights” as a doctrine, activist groups automatically validate its existence. Daring to move the crayon outside of those borders scares them silly.

And so, the progressive community lurches onward, decrying each new corporate “rights” outrage as, well, a new outrage around which they can assert their importance and pad their coffers. That will inevitably continue until so many liberal sacred cows are slaughtered (like campaign finance reform), that it shakes some groups away from this otherwise moribund pack.

The movement to eliminate corporate “rights”

Luckily, many people outside of the pack are not waiting for that ship to slowly change course. They understand that moving beyond fossil fuels, taking control of their politics, and creating a government with actual control and oversight of corporations, requires the elimination of the doctrine of corporate “rights.” They also understand that such change will not come from the top down, but that most of it must come from the bottom up.

Town by town, village by village, city by city, they are taking action. They’re banning oil and gas extraction by stripping oil and gas corporations of their “rights” in each of their communities; they’re stopping corporations from taking their water for bottling operations by elevating the community’s right to water above corporate “rights” to take it; and they’re adopting community bills of rights that ban oil and gas pipelines by declaring that the corporate “right” to build them simply does not exist within their community.

They are borrowing the critical lessons of past people’s movements—such as the civil rights movement—which had to break the law on a massive scale for needed social change to occur. And they’re faced with the same questions those movements—such as the abolitionists and suffragists—were forced to ask: “If not us, then who? And if not now, then when?”

Today, people on the frontlines of this work understand that community lawmaking is just the first stage in building the largest social movement of our time. It is that movement which will eventually kick corporations out of our state and federal constitutions once and for all.