Organizing on Wobbly Ground: Learning from ‘Solidarity Unionism at Starbucks’ 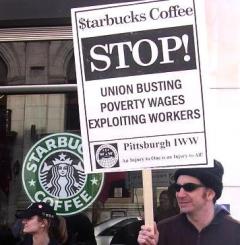 A Starbucks Workers Union member protests outside a Starbucks in Pittsburgh in 2009.   (Photo via greenchange.org)

The decline of unions does not mean the end of the labor movement. Indeed, the last few years have seen a proliferation of new kinds of worker organizations and workers' rights campaigns. Some of the most exciting of late have been conducted by community-based groups (rather than workplace-based unions), such as the Coalition of Immokalee Workers and those part of the National Domestic Workers Alliance.

During the last decade, Chicago-based IWW has seen a resurgence of organizing activity and visibility. That's in part because the 106-year-old international union, which once had 100,000 members but is now only a fraction of that size, formed the Starbucks Workers Union (SWU) in 2004 in New York City. It was the coffee chain's first union, and it has since expanded.

The Starbucks campaign is remarkable because it draws from both IWW's history and the best practices of worker centers, which are the principal heir of the union's rich organizing legacy. Ironically, today’s IWW activists, or Wobblies, can learn from worker centers. In fact, one sign of the IWW's revival is the emergence of the IWW-affiliated Lucy Parsons Workers' Center in Chicago. Gross and Lynd’s pamphlet is particularly instructive to Wobblies who are challenged by the task of reaching out to workers in need of organizing.

Gross and Lynd, both proponents of rank-and-file unionism, union democracy, and direct action, focus on the practice of solidarity unionism among IWW members working for Starbucks. The story is compelling, in part because of the symbolic importance of the coffee chain. The ubiquitous corporate giant is emblematic of the precarity of the service economy. The authors make the important point that new organizational forms of business require new forms of worker organization.

Starbucks, for instance, argues that a bargaining unit would necessarily include all of the stores in a given region. This, along with ideological reasons, is why the IWW is organizing Starbucks workers across coffee shop locations, rather than shop by shop.

Gross and Lynd share the stories of workers like Laura de Anda, who deal with overbearing managers, low-wages, unilateral scheduling and repetitive motion injuries. For readers without personal experience in service-sector jobs, some of these abuses may seem like mere annoyances; not nearly as exploitative or shocking as, those in say, the meat-packing industry.

But taken together, the at-times idealized barista can find herself in a state of psychological pressure and physical strain. I should know—I did time as a barista in a coffee shop in Chicago’s banking district. My fingertips became so raw from the constant handling of coins and hand washing that I had to wear Band-Aids to prevent infection. I also had to corner my boss and make an appeal to his wife after he didn’t give me my promised raise at the end of my training period.

Solidarity Unionism at Starbucks is useful because it names and describes a collection of strategies nontraditional worker organizations like worker centers increasingly employ. This is particularly true for groups that do not limit their organizing by industry or geographic community. Instead of seeking geographic or industry monopoly power, worker centers like New Brunswick’s New Labor, Cincinnati Interfaith Workers Center, and the organization I work for, Arise Chicago, choose to build a base of workers organized around the principles and power of direct action and mutual aid.

This means workers joining together to change conditions and terms of work, regardless of what or where their work is. In a recent and typical Arise Chicago action, a retired factory worker, social worker and home healthcare worker joined a butcher to confront his boss about paying the minimum wage, signing a discrimination-free workplace statement, and covering the medical costs of a work-related injury. Worker centers are effective in mobilizing marginalized and low-wage workers because they are rooted in the communities they organize, address workers’ immediate needs and develop them into leaders.

Gross and Lynd describe how IWW-SWU members take bold actions to win concrete gains. We learn how workers disobeyed management to create a comfortable break area, and organized a work stoppage to demand affordable healthcare options and sick days. Besides being dramatic and attention-grabbing, some of these campaigns are notable for their tactical use of legal complaints.

Organizations like the SWU are successful in part because the workers they organize are covered by the NLRA. When people think of the National Labor Relations Board (NLRB)—the agency charged with regulating union elections and protecting workers’ rights in the process—most often they think of union organizing campaigns. But if one studies the NLRA, the pamphlet authors point out, any workers have the right to engage in “collective concerted activity” and are protected from retaliation for doing so.

SWU workers in New York City won a complaint and were reinstated, changing a company policy against distributing union information in the process. In the example cited above, the threat of filing a legal charge for violation of protected concerted activity was sufficient to win demands related to a comfortable break area.

The IWW has a long and fascinating history of solidarity unionism, even before the passage of the NLRA in 1935. From its founding in 1905, the IWW was radical in its aim to organize workers as a single class, instead of as members of a particular trade or industry.

The IWW faces enormous challenges, however. Though it has a history to be proud of, the union would do well to update its image for the 21st-century worker. I have witnessed earnest IWW organizers dressed with newsboy-styled caps, singing “Solidarity Forever” by themselves at a rally. I suspect that some Wobblies are moved by the romanticism of the union’s heyday, but do not know how to speak the language of the 21st century service worker.

I’ve observed IWW activists feverishly discuss the power of the general strike, but strain to develop a strategy for combating wage theft in the workplace. The IWW has begun to revive the “Chicago Idea” (a combination of anarchism and unionism), but thus far has not managed to create a Chicago presence.

Solidarity Unionism at Starbucks provides a glimpse into campaigns that have successfully spoken to disgruntled workers in need of organization. None of the campaigns described in its pages attribute their success to appealing to co-workers’ innate yet hidden thirst for revolutionary activity. On the contrary, SWU appears to be successful because of its appeal to workers’ immediate and basic needs: a fan; a breakroom; sick days.

Gross and Lynd’s good storytelling and legal tutorial should serve as a basic introduction to solidarity unionism for rank-and-file worker activists. And with its attractive and portable zine design, political cartoons and accessible text, the pamphlet speaks to today’s workers in a way that should serve as a model to other IWW activists and worker center activists alike.