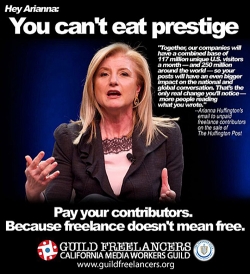 The Newspaper Guild called for bloggers to boycott the Huffington Post in March of this year.   (guildfreelancers.org)

Last week was a milestone in journalism, as the Huffington Post exceeded the New York Times in Web traffic and cemented its role as a main rival to the Gray Lady. It was also noted that the combined AOL-Huffington Post newsroom staff of 1,300 people is now bigger than the Times' 1,200-person staff. While much of the debate about the rivarly has focused on Huffington Post’s adoption of savvy Internet tactics versus the more old-school Times, very little of the discussion has focused on where the two newsrooms differ the most: their labor practices.

The Times' newsroom staff is entirely unionized, while the AOL-Huffington Post staff is entirely nonunionized. Also unlike the Times, which insists on paying every professional writer (even op-ed contributors), the Huffington Post has relied on a network of more than 8,000 unpaid bloggers to establish itself and drive traffic to its site. In a Forbes magazine article, AOL executives were quoted as saying that AOL CEO Tim Armstrong “talked a lot about the importance of recruiting hordes of free bloggers…. “It was always, ‘Arianna does it. That’s what she’s built her business on. Why don’t we do it, too?’” says a former AOL editor-in-chief.”

Labor leaders claim that with 11,000 journalists having lost their jobs due to newsroom cutbacks in the last three years, AOL-Huffington Post has risen to its stature by exploiting journalists desperate to establish names for themselves; they're thus willing to work for free in the hope that they may someday find paid work. They say  the fact the Huffington Post doesn't pay its writers is an unfair business advantage that is sure to lower the standards of journalists.

In response to what labor leaders see as an exploitative situation, on March 17, the Newspaper Guild (TNG) and the National Writers Union (NWU) both called for bloggers to refuse to blog at the Huffington Post and join an electronic picket line against the publication.

The unions are demanding that a pay schedule be established for compensation of all unpaid Huffington Post bloggers and that those bloggers be given greater editorial control over how their pieces are used.

The unions requested a meeting with Arianna Huffington to describe labor practices at the Huffington Post. So far, Huffington has agreed to meet, but union officials are still hoping to secure one.

It should also be noted that in addition to fighting for pay for unpaid bloggers, union officials are seeking to unionize already paid staff at the Huffington Post. Some union members also want to a secure a pledge from Huffington that she will not engage in illegal unionbusting activities.

“Ms. Huffington is creating a new editorial business model built on the desperation of the 21st century journalist. It's a business model that enriches itself by selling the snake-oil that, for a writer, 'building your brand' is an end unto itself,” says sports writer Dave Zirin. “I think it's dangerous for the future of our craft and I ain't gonna work on Arianna's farm no more. The virtual picket line should be respected for this reason alone.”

While these writers have very little formal connection to the labor movement, they are respecting the picket line out of a sense that something must change for journalists in the industry. Labor leaders, including AFL-CIO President Richard Trumka, have also stood up and across the board refused to blog at the Huffington Post. Some of the site’s paid reporters have complained that some labor leaders have refused to talk to them about stories out of a sense of solidarity with the picket line.

While support for the picket line has been strong, some progressives leaders who have worked on projects heavily funded  by organized labor—such as former U.S. Secretary of Labor Robert Reich, American Prospect Editor Robert Kuttner, Robert Creamer of Americans United for Change and bloggers at the labor funded Campaign for America’s Future—have continued to blog at Huffington despite calls from union leaders to not blog there. (Full disclosure: I worked for the Campaign for America’s Future from 2009-2010, and blogged at Huffington Post until I was "fired" in late January).

Reich has told labor leaders that he believes in Creative Commons copyright usage and provides his articles free of charge to any publications that wants to run them and would not be willing to participate in the boycott for that reason. (However, Reich’s belief in Creative Commons copyright does not extend to his books. Indeed, Reich retains copyrights to his book, whose sales are greatly aided by being purchased in bulk by labor unions.)

I write the equivalent of op-ed columns that Huff Post distributes more widely than any other medium. I'm not a journalist in any sense, but rather a political strategist and organizer. I'm not an employee or contractor with Huff Post. I strongly favor the unionization of the employees of every employer in America -- including Huffington Post.

But my relationship -- and that of other bloggers on Huff Post -- have a completely different quality that than of a professional journalist.

Public figures and political leaders have justified continuing to write at the Huffington Post since publications such as the New York Times would not pay for op-ed contributions from elected officials or heads of political organizations. However, the Times does pay op-ed contributors who are professional writers and do not make a living as political leaders or activists. “The basic concept is that we think writers should be paid for their work,” New York Times Editorial Page Editor Andy Rosenthal told Forbes.

Other progressive leaders who continue to write at the Huffington Post say they are supportive of the unions and are attempting to persuade Arianna Huffington to reach an equitable settlement.

“I value both Huffington Post and the efforts by the unions. I am in touch with Arianna on this, and I hope they come to an agreement," says American Prospect Co-Editor Robert Kuttner.

Campaign for America’s Future Co-Director Roger Hickey echoed these sentiments, saying “We are in favor of the employees at the Huffington Post being represented by a union. We have told Arianna that she should talk to the union.”

“They want something for nothing, they want it both ways. The fact is, the bigger the boycott, the stronger the union, the quicker and fairer the settlement. Whatever "good faith" exists is only because of those who have taken a stand,” says National Writers Union (NWU-UAW) President Larry Goldbetter.

“It’s a little too easy to impose sanction on labor-funded nonprofits, and I’m sure there are some that deserve it,” said Goldbetter. While the unions have not made any specific threat of sanctions against labor-funded groups that continue blogging at the Huffington Post, labor leaders are upset that progressives are questioning something as basic as a picket line.

“We are surprised by folks who would never think of crossing a picket line, but somehow think because it's digital it's different. It's not,” said TNG (affiliated with CWA) President Bernie Lunzer.

Others say that progressives who continue to write for the Huffington Post are setting a bad example for young people who have joined the labor movement in the wake of the huge protests in Madison, Wis., this year.

“Now it appears that even leading progressives who should be setting a good behavioral example for younger activists care little about respecting a labor boycott with growing support,” says labor journalist, former CWA union organizer Steve Early, who is honoring the boycott. (He's also a contributor to Working In These Times.) "Who's going to take these guys seriously when they preach to us about the need for social and workplace solidarity but then completely ignore the collective efforts of the Guild and the National Writers Union to make HuffPo a more responsible employer of freelance labor?"

Wherever one stands on the issue of the Huffington Post’s use of unpaid labor, it's progressives—who are both participating and not participating in the picket line—who will determine the future of what’s acceptable for labor practices in the journalism industry.