Will Workplace Safety Become a Casualty of the Debt Deal? 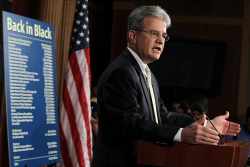 Tom Coburn (R-OK) unveils his "Back in Black" deficit reduction plan at a news conference July 18, 2011. If the "Gang of Six" member joins the new bipartisan "supercommittee," his plan to cut OSHA's budget could become reality.   (Photo by Alex Wong/Getty Images)

WASHINGTON D.C.—This week, Congress passed a debt-ceiling deal that is expected to reduce the deficit by at least $2.1 trillion over the next 10 years. The debt deal sets up a “supercommitee,” which will identify $1.5 trillion in additional cuts by Thanksgiving. Congress will then vote on the recommendations in an "up or down" vote—no amendments allowed.

The committee will be comprised of six Democrats and six Republicans from both chambers of Congress. It's unclear who is going to be on the committee, but Justin Feldman, health and safety advocate for Public Citizen’s Congress Watch division, is sure who shouldn't get the nod: Senator Tom Coburn (R-Okla), who was part of the bipartisan "Gang of Six" that tried to forge a compromise on the budget ceiling last month.

Coburn has signled out cutting the Occupational Health and Safety Agency’s budget as a key priorities of his. Back in July, Coburn published a deficit reduction plan called “Back in Black,” which called for $72.6 million in cuts to the federal agency, which is part of the Labor Department. The report calls for eliminating OSHA community workforce training programs, cutting back on worksite inspections by OSHA inspectors, and focusing resources on voluntary safety programs.

"We fear OSHA cuts may come out of the supercommittee. Sen. Coburn’s proposal would weaken OSHA and put workers’ lives in danger,” Feldman says. “The report bends facts to conform to an anti-regulatory bent.”

Feldman alleges that Coburn report misrepresents the nature of OSHA’s work. “Attempting to show evidence of inefficiency at the agency, the report incorrectly asserts that the number of OSHA inspections declined between 2008 and 2010, a time when the agency’s budget was growing. OSHA’s official statistics, however, show that the number of inspections actually increased by 6 percent during this period,” says Feldman.

Senator Coburn’s office did not return requests for comment.

Currently, OSHA has a budget of only $558.6 million. Many public health and safety advocates say that that figure doesn't leave OSHA with the resources needed to adequately inspect work places. There are only 2,218 inspectors at both the federal and state level who inspect 7.3 million workplaces employing more than 135 million workers. (That's one inspector for every 57,984 workers.) At this rate, OSHA can inspect a workplace on average once every 129 years and state OSHA inspectors could inspect one every 67 years. For a country the size of the United States, health and safety experts say you need at least 12,000 inspectors, six times more inspectors than OSHA current has, in order to properly inspect America’s workplaces.

“The cuts Tom Coburn proposes would be absolutely devastating to the agency,” he says.