Herman Cain, the Other NRA and the Stagnant Minimum Wage 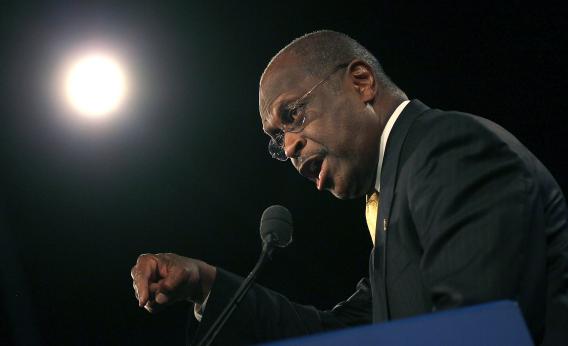 Over the weekend, Herman Cain, the former CEO of Godfather Pizza and former CEO of the National Restaurant Association, shocked many political observers when he won the Florida GOP Presidential Straw Poll. While it is unclear what effect Cain’s showing in straw poll will have on his electoral chances, Slate’s Dave Weigel wrote that Cain’s victory in the Florida straw poll showed that “in the Tea Party-flavored GOP Cain is a rock star who generated deep affection”.

Many dismissed Cain's chances early on because of his unusual statements—such as his interest in stopping illegal immigration to the United States by building a moat full of alligators between Mexico and the United States. However, those familiar with Cain from his leadership of the National Restaurant Association know that he is an extraordinarily savvy political player. In 1993, Cain became vice chairman of the NRA and its lead media spokesperson—and the organization's influence rapidly grew.

“When he became a leader of the National Restaurant Association that year, it emerged as the leading spokespeople against the Clinton healthcare bill, the 1993 economic package and budget, any minimum wage increases, and a wide variety of other progressive economic measures,” says Mike Lux, special assistant to President Clinton for public liaison.

“Cain portrayed himself as speaking for small business, but small businesses would have dramatically benefited from healthcare reform, and did benefit hugely from the 1993 budget. In fact, most of the National Restaurant Association’s money came from the big chain restaurants- McDonald’s, Pizza Hut, - and because they would have finally had to offer their workers’ health care and higher minimum wages, and because their very wealthy execs would had to pay more in taxes because of the ’93 budget bill, they hated the legislation Clinton was pushing. Cain was their perfect front man” says Lux.

After a successful role in Clinton healthcare fight, Cain became chairman of the organization in 1994, and then worked full time as its CEO from 1996 to 1999. In his leadership role Cain transformed the National Restaurant Association from a sleepy little trade association to earning a spot in Forbes Magazine 1997 Survey of Washington’s 25 most powerful pressure groups coming at number 24.

“When Cain took over the National Restaurant Association in the mid-90s it became much more politicized” says Jose Oliva, policy coordinator at the worker advocacy organization Restaurant Opportunities Centers United. “Cain fought off the efforts to make the NRA a real trade association that represented various types of views and really pointed it in the directions of extreme libertarian conservatism. He became a celebrity for libertarian ideologues for this reason”.

Herman Cain did more than just prevent servers from seeing their wages increased. He worked hard to turn politicians against using minimum wage increases as a popular election year slogan to win votes from underpaid workers.

“Historically, a minimum wage increase was something that was passed every couple years. It was something that politicians ran on in an election year. It’s a wildly popular issue even to conservative voters who make low wages” says Oliva. A fall 2010 poll backs up Oliva, a veteran activist; 67 percent of Americans support increasing the minimum wage to $10 an hour.

During the 2008 presidential campaign, Barack Obama promised to raise the minimum wage to $9.50 an hour. But since taking office, Obama has ceased mentioning the issue of raising the minimum wage.

“In the past, up until the 1990s, we were always able to overcome their voices in the Washington because raising the minimum wage is such a politically popular issue. However, the National Restaurant Association is now so powerful as a result of people like Herman Cain that it didn’t even become an issue among Democrats. A lot of members won’t even talk about it. Some say my career will be over if I touch this” says Oliva.

“The NRA has been effective in spreading myth that restaurants will shut down [and] people will lose jobs, even though evidence suggests that raising the minimum wage is good for the economy. Still, we continue to reach out to our colleagues one by one to bring them on board;" says Edwards. "I used to work for tips, so I know what it means to put together enough tips to pay the rent. I am determined. I am a fighter. I think it’s possible to beat any restaurant group. We need to make this a fight for the people”.