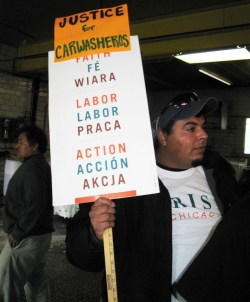 Arise Chicago and other groups take aim at often-overlooked industry

Though car washes regularly subject their workers to hazardous conditions and wages far below the legal minimum, they have seldom been the target of union organizing. But inspired by a campaign in southern California that won the industry’s first union contract for car wash workers last month, workers, community groups and unions have launched their own drive to fight exploitation at car washes in Chicago.

On Tuesday, November 15, approximately 50 members and supporters of community and labor organizations gathered outside the Little Village Car Wash on Cermak Road to protest what they described as persistent wage theft and dangerous working conditions at the business.

The demonstration, organized by the interfaith labor group Arise Chicago and supported by the United Steelworkers, Stand Up! Chicago, and Interfaith Worker Justice, was demanding back wages for two former employees. Carlos Ruiz, who worked at the car wash from 2000 until 2011, reported losing part of his thumb in a workplace accident and being compensated only with tips for the duration of his employment. He told those assembled that on a good day, he would receive about $40 for 12 hours of work. When business was slow, he would make as little as $15 over the course of the day.

Martin Montoya, another former employee of the car wash, told In These Times that the business’ owners were taking advantage of the workers because many of them were undocumented.

Though the minimum base wage for tipped workers (including car wash workers) is lower than the legal minimum wage in Illinois ($4.95 rather than $8.25), a 2010 study from the University of Illinois at Chicago found that more than 15 percent of tipped workers in Cook County earned less than the tipped worker minimum wage and regularly had tips stolen from then by employers.

Micah Uetricht, an organizer with Arise (and occasional contributor to In These TImes) who has been investigating conditions at Chicago car washes, reported that though conditions at the Little Village Car Wash are particularly grievous, abuse of minimum wage, overtime, and worker safety laws is the norm in the industry in Chicago.

“Almost all the car washes we've visited pay below the minimum wage, work their workers eleven or twelve hours with no overtime, have nonexistent health and safety considerations,” says Uetricht. “The level of exploitation in this industry is mind-blowing.”

As supporters marched outside the car wash, holding signs in Spanish and English and chanting, “What’s outrageous? Stealing wages!” a delegation entered the business and asked to set up a meeting with the owner. Uetricht told In These Times that he had already made multiple attempts by letter and phone call to contact the owner, but to no avail.

When Ruiz, Montoya and staff members from Arise approached the manager, he reportedly refused to talk to them or to call the car wash’s owner.

After the delegation exited the car wash, supporters regrouped in the business’ parking lot and emphasized that this was the beginning rather than the end of the push to demand payment of back wages and improved conditions at the business. “We hope that next time, the boss will be willing to show his face,” said Ruiz.

Though Uetricht said it was surprising that the business was still unwilling to negotiate after a strong show of support from the community, he was encouraged by current Little Village Car Wash employees’ receptiveness to the action.

Arise, together with the United Steelworkers and other community organizations, will continue to push for improvements in the car wash industry. But the campaign that resulted in union representation for car wash workers in L.A. (which USW was involved in) took nearly four years, and Chicago organizers emphasized that the movement was still forming and considering how to draw from the strengths of the various organizations involved.

Anthony Alfano, an organizing counsel for the United Steelworkers (USW) District 7, emphasized that while USW was now representing the Southern California car wash workers, it was not the aim of the union to lead the movement in Chicago. “This is an organic movement,” Alfano told In These Times. “And we’re here in support. Our first priority here is to help these workers achieve social justice, achieve the pay that they’re entitled to under the law. We take our cues from other people in the community, as well as the car wash workers themselves.”

Nevertheless, Arise organizers acknowledged the significance of what had been accomplished in California and pointed to the lessons that it held for other areas of the country. Said Uetricht of the campaign in California, “It was a pretty ground-breaking campaign in that these are immigrant workers in an industry that many unions thought you could never organize in the past. It was pretty inspiring to see that. . .it could be done.”