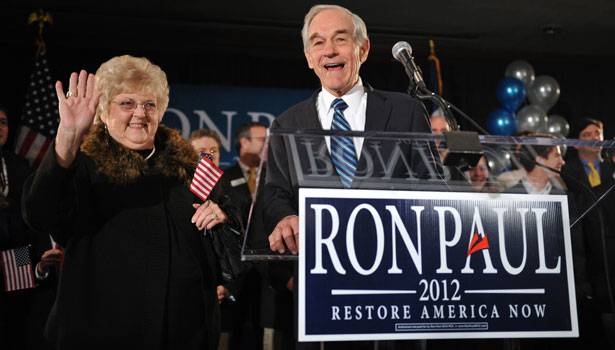 Ron Paul’s showing yesterday in the Iowa Caucus—he came in third with 21 percent of votes, behind Mitt Romney's and Rick Santorum's 24.6 percent showings—wasn't the victory his passionate supporters wanted, but it makes him a force to be reckoned with throughout the rest of the Republican primary season. Paul, a longtime congressman from Texas, drew his support from an unusual combination of libertarians, conservatives and even a few progressives who supported his firm stances against the wars, opposition to the Wall Street bailout and strong support for civil liberties.

But what would his civil liberty stances mean for American's workers? It appears Paul would actually like to take away a key protection Americans currently enjoy at work. He supports ending a provision of the National Labor Relations Act that makes it illegal for employers to fire workers based on their support of unions.

Several times between 2001 and 2009, Ron Paul sponsored the Truth in Employment Act, legislation that would amend the National Labor Relations Act to allow employers to fire pro-union workers (sometimes called “salts”) who join a workplace with the intent of unionizing it. Paul's office did not return phone calls from In These Times about the candidate's support for this piece of legislation.

Union activists sometimes get jobs with employers that they wish to unionize in hopes that their presence will make the union drive more successful. Sometime these “salts” enter a workplace at the urging of a union and sometimes they do it independently. The Truth in Employment Act would amend the National Labor Relations Act by allowing employers to fire any workers that they suspect took a job with the intent of organizing their workplace.

In 2001, on the floor of the House of Representatives, Paul said:

I rise to introduce the Truth in Employment Act which protects small businesses and independent-minded workers from the destructive and coercive "top-down'' organizing tactic known as salting. Salting is a technique designed by unscrupulous union officials for the purpose of harassing small businesses until the businesses compel their employees to pay union dues as a condition of employment. Passing the Truth in Employment Act is a good first step toward restoring the constitution rights of property and contract to employers and employees.

UE Political Action Director Chris Townsend, however, says that if passed, the Truth in Employment Act would lead to “open season” on workers hoping to organize a union.

The legislation "would allow employers to refuse to hire, or even to fire, any worker suspected of—or declared by the boss to be -- a union supporter. No worker will be safe if employers are given this license to discriminate on the basis of one’s beliefs about unions or anything else,” Townsend says.

While Paul claims he is for individual liberty, his support for the Truth in Employment Act shows that when its comes to the workplace, an employer's liberty trumps that of a worker.