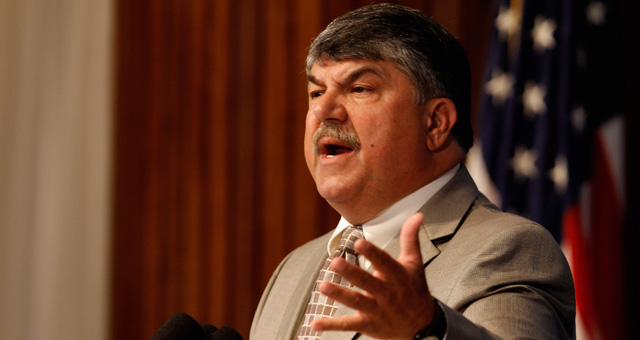 WASHINGTON D.C.—Last Thursday, at the UN Investor Summit on Climate Risk, AFL-CIO President Richard Trumka spoke publicly about divisions in the labor movement over the proposed Keystone Pipeline, which would carry oil from Canada to the Gulf of Mexico if built.

Disagreements between unions over the pipeline wasn't news, but the fact that Trumka acknowledged them was. It was the first time I've heard Trumka say that unions that were on different sides of the politically sensitive issue—some for, some against. Several AFL-CIO observers also commented that it was the first time they had a president of the labor federation talk about why unions were divided on key issues. (They declined to speak on the record because of the matter's sensitivity.)

Unions affiliated with the AFL-CIO remain divided over the project, which President Obama has delayed approving or rejecting. The Building Trades Council of the AFL-CIO, whose members would be employed in constructing the pipeline, are in favor of it. In response to a recent effort by congressional Republicans to force Obama to permit the Keystone Pipeline in exchange for passing an unemployment extension, AFL-CIO Building Trades Council President Mark Ayers, said:

[O]ur unions have been steadfast supporters of the Keystone XL pipeline, a project that is truly "shovel-ready" and a privately funded endeavor that would put significant numbers of American skilled craft professionals back to work under a project agreement that ensures safe and efficient construction. Regrettably, both of these issues have now been usurped and transformed into political pawns, where political posturing supersedes the need to create sound public policy that benefits working Americans.

….President Obama should immediately grant a presidential permit for the construction of the Keystone XL Pipeline, and congressional Republicans should craft and pass a 'clean' unemployment insurance extension; because partisan politics has never paid a mortgage or put food on anyone’s table.

We need jobs, but not ones based on increasing our reliance on Tar Sands oil. There is no shortage of water and sewage pipelines that need to be fixed or replaced, bridges and tunnels that are in need of emergency repair, transportation infrastructure that needs to be renewed and developed. Many jobs could also be created in energy conservation, upgrading the grid, maintaining and expanding public transportation—jobs that can help us reduce air pollution, greenhouse gas emissions, and improve energy efficiency.

The division between the unions has led to a heated exchange of words. ATU President Larry Hanley told me in September that “It’s a short-term gain of a few thousand jobs to endorse this pipeline, but a big long-term loss for the labor movement to support this pipeline."

Meanwhile, in conjunction with the Oil & Natural Gas Industry Labor-Management Committee, the Building Trades Council launched a website in support of the Keystone Pipeline that included this statement: “Hollywood elite 1% should stop flying to DC and speaking out against jobs that help the other 99% of America!”

And how has the AFL-CIO navigated this sharp disagreement between its own members? According to staffer in Speaker of the House John Boehner's office (R-Ohio), writing on a blog, the AFL-CIO supports the pipeline.

But Trumka clarified his organization's position at the UN Investor Summit on Climate Risk last week, saying, “The AFL-CIO has not taken a position on the Keystone pipeline—unions don't agree among ourselves.“

Speaking earlier in the speech about why many working people are wary of slogans like “End Coal,” Trumka, a former coal miner from a coal mining family and former president of the United Mine Workers of America, said:

Nemacolin lives on coal—the coal mine my grandfather and my father went down to every day of their working lives, the power plant the mine feeds, the rail lines that carry coal to other plants. When these folks hear "End Coal," it sounds like a threat to destroy the value of our homes, to shut our schools and churches, to drive us away from the place our parents and grandparents are buried, to take away the work that for more than a hundred years has made us who we are.

So why, in an economy without an effective safety net, would the good men and women of my hometown and a thousand places like it surrender their whole lives and sit by while others try to force them to bear the cost of change?

The truth is that in many places – and not just places where coal is mined – there is fear that the "green economy" will turn into another version of the radical inequality that now haunts our society—another economy that works for the 1% and not for the 99%.

In a sign that Trumka wants to continue a dialogue between various sides on climate change and jobs issues, Trumka said,

[W]e need dialogue between environmentalists and workers and communities about the future of coal. About what the global labor movement calls a Just Transition to a low carbon emissions economy.  And the AFL-CIO is ready to host that dialogue.

It’s unclear if the various unions that disagree about the pipeline plan on talking to each other. ATU Communications Director David Roscow declined to comment, referring back to a previous ATU/TWU statements about the pipeline. The TWU and the AFL-CIO Building Trades Council did respond to a request for comment on how they plan to move forward on having constructive dialogue.

But what is clear from Trumka’s speech is that he is willing to openly discuss significant divisions within the labor movement. That's a very rare thing for a labor leader to do, and an important first step.