Why Is the Recovery So Feeble? Ask (Laid-Off) Public-Sector Workers 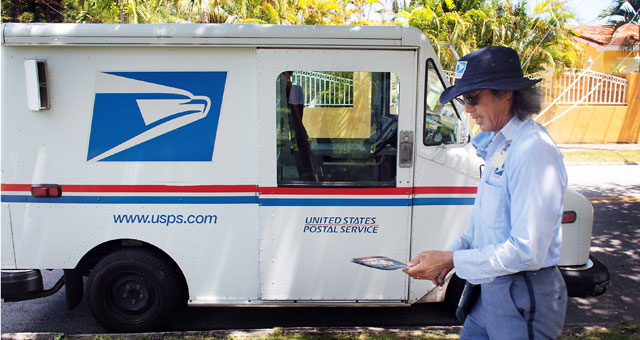 Through rain, sleet or snow, but not deficits: The USPS has announced plans for massive lay-offs and post office closures around the country.   (Joe Raedle/Getty Images)

The slashing of public-sector jobs—concentrated in states Republicans took control in 2010—is accounting for a major slowing of the nation’s economic recovery. In a recent report issued by the Economic Policy Institute (EPI), economist Josh Bivens calculated that the U.S. has lost 584,000 government jobs during the recovery, an "unprecedented drag."

Bivens argues that if America had emulated the strategy used to strengthen previous recoveries, it would have added 1.2 million public-sector jobs since the recovery’s start in June 2009. And the expanded buying power of these workers would have led to an additional 500,000 jobs in the private sector.

"If we had been following normal path, we’d have 1.7 million more jobs," Bivens told In These Times last week. “Given that we have a shortfall of 10 million jobs in this country, we would have created nearly one fifth of the jobs we need.”

The drop in public employment further reduces consumer demand at a time when American households and small businesses are only reluctantly spending. Families are devoting more of their income to getting out of debt caused by credit cards, underwater mortgages and skyrocketing college tuition.

Of, course the nearly three-year "recovery" is still far from solid, as David Moberg has shown on the website:

The official unemployment rate in March [2012] fell one-tenth of a percentage point to 8.2 percent—the only good political news for President Obama. But that gain largely reflected the numbers of people who dropped out of the labor market. The 120,000 increase in jobs [are] about half the recent rate and a third of what's needed to return to relatively full employment in three years…

While most of the cutbacks have occurred at the state and local levels thus far, federal jobs and federal programs that stimulate the economy will be increasingly under the gun. President Obama appears to be acceding to vast cutbacks in the U.S. Postal Service demanded by Republicans, which will be “a further drag on the recovery,” Bivens says.

Moreover, there are several stimulative federal programs that will be ending in January 2013, Bivens stated. “The payroll tax cut will be ended, the unemployment compensation extensions will be halted, and all of the Bush tax cuts, including those for moderate income families, will be stopped. This will all be contractionary for overall employment,” Bivens said.

In part, cutbacks in government employment during the current recovery are the result of the extraordinarily devastating impact of the economic meltdown and its connection to the deflated housing bubble.

“The budget gaps have been deeper for the states, and have required more fiscal contraction,” Bivens noted. “The impact on housing values has created a laser targeting of states that are so dependent on property taxes, as property values have declined so steeply. At the same time, “There has been a conscious decision this time to target public workers.”

Over the last several years, the Right and Republican-allied politicians like Wisconsin Gov. Scott Walker have tried to focus public anger against supposedly privileged public employees, much like earlier Republican-led crusades against “welfare recipients” receiving benefits from the public, as Adam Bessie has pointed out.

Along with stigmatizing public employees including teachers, nurses, firefighters and police officers, GOP lawmakers have promoted a number of remarkably hollow slogans that assert the need for draconian cuts in public spending and public employment. To wit:

Cutbacks in public employment have been heavily concentrated in Republican-controlled states, as Mike Konczal and Bryce Covert document:

Of the eleven states in which Republicans came into power in 2010 – Alabama, Indiana, Maine, Michigan, Minnesota, Montana, New Hampshire, North Carolina, Ohio, Pennsylvania and Wisconsin – five were among the seven states that lost more than 2.5 percent of their workforce from December 2010 to December 2011. The remaining 42 states lost an average 0.5 percent (there is no data for Mississippi).

The cutbacks in public employment have not produced economic miracles for any of these states. Particularly noticeable is the failure of Gov. Walker, who faces a recall election in June, to make any progress on his pledge of producing 250,000 jobs. In fact, Wisconsin, after cutting its public employment by about 2.8%  has had the worst overall performance in job creation of any of the 50 states.

Nonetheless, Republicans can find important gains for their corporate constiutents.

In a paper called "Spend Less, Owe Less, Grow the Economy," Republican members of the Joint Economic Committee hailed the benefits of  “decreasing the number and compensation of government workers":

The effects of this will ripple into the private sector in the form of lower wages: A smaller government workforce increases the available supply of educated, skilled workers for private firms, thus lowering labor costs.

In Wisconsin, this stance is especially stunning, as Walker campaigned on the notion that public employees should absorb the same kind of pay and benefit cuts inflicted by corporations upon private-sector workers. But in this report, Republicans argue that reductions in public-sector jobs and compensation will pave the way for yet more pay slashing among private-sector workers.

But Wisconsin’s Walker, leading the wave of anti-worker attacks, essentially transformed pay cuts for public workers into corporate tax breaks, as Bessie insightfully argued before the enactment of Walker’s program:

Walker's tax cuts for private business appear to be underwritten by cuts in public sector benefits. If he succeeds, the money will literally be handed from the pockets of public servants to private business owners.

While Democrats may be enjoying Walker's mounting problems, the weakness of the recovery will also be a problem for President Obama. His failure to defend the USPS is emblematic of his larger failure to consistently make the case for a strong public-sector that serves the 99%.