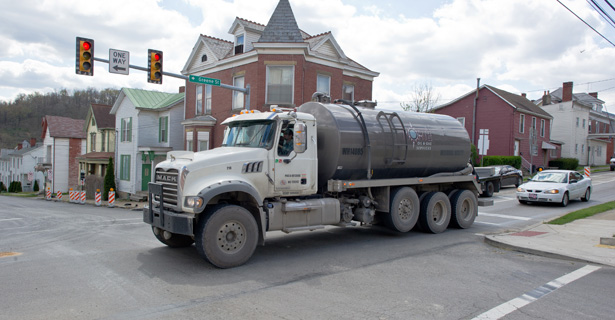 A waste water tank truck passes on the main street of Waynesburg, Pa., on April 13, 2012, carrying the byproduct of a process known as hydraulic fracturing—or fracking. (MLADEN ANTONOV/AFP/Getty Images)

WASHINGTON—As hydraulic fracturing—also known as "fracking"—has become a more common way to extract natural gas from underneath the United States, employment in the natural gas industry has expanded dramatically. According to the Bureau of Labor Statistics, between 2003-2008 there was a 62-percent increase in the number of workers employed in the oil and natural gas industries in the United States. During this same period, the number of fatalities in the industries grew by 41 percent.

In a letter sent last week, the AFL-CIO, the United Steelworkers union and the United Mine Workers complain that the Occupational Health and Safety Administration (OSHA) and the Mine Safety and Health Administration (MSHA) are not doing enough to regulate the potential hazards that harm fracking workers.

“A strong effort by the federal safety and health agencies is needed to work with the industry and involve unions to ensure that these controls are properly implemented as employment in this industry sector rapidly grows,” the unions and the labor federation wrote.

According to one study by the CDC National Institute for Occupational Safety and Health (NIOSH), workers in the oil and natural gas industries are seven times as likely to die on the job as workers in other industries. The three most common types of fatal accidents that those working for well-servicing companies fall victim to are motor vehicle accidents (29 percent), being struck by objects (20 percent), and explosions (8 percent).

Motor vehicle accidents are a leading cause of death among oil and gas industry workers in part because of an exemption from federal highway safety rules that allow truckers to work longer hours than drivers in most other industries. In March 2011, National Transportation Safety Board Chairwoman Deborah A.P. Hersman wrote a letter to the Department of Transportation asking the federal agency to end this exemption. Last December, the Federal Motor Carrier Safety Administration declined, saying the exemption had already “been in place for nearly 50 years."

Those helping to pull oil and gas from the ground are also regularly exposed to cancer-causing silica dust. Fracking involves injecting large amounts of water, sand and chemicals into the ground to break up shales and bring natural gas to the surface. A large amount of the sand used in fracking often contains silica dust. A study by NIOSH found that 47 percent of all oil and natural gas workers breath air that exceeds the safe breathing limits for silica dust.

(Those mining silica sand are also affected by the dust, of course. Currently, an OSHA rule that would set safety standards on the amount of silica dust workers can be explosed to has been held up by the White House for more than a year; see my story "A Tale of Two Rules: Washington Bureaucracy and the Politics of Workplace Safety," for more on that.)

In order to reduce the number of oil and natural gas workers killed on the job, organized labor wants OSHA and NIOSH to issue a “joint hazard” alert identifying all the hazards and identify a way to deal with them. In addition, the unions want MSHA to identify increased hazards associated mining silica sand. Finally, they want the Obama administration to immediately implement the delayed rule limiting workers' exposure to silica dust.

“The development of new energy sources, and exploration of existing energy sources, must be done safely without putting workers in danger. Through extensive efforts, including effective regulation and oversight, tremendous progress has been made controlling hazards and reducing injuries, illnesses, and fatalities in coal mining and other energy related sectors," labor officials wrote in the joint letter. “We urge OSHA, NIOSH, and MSHA to apply the same kind of effort and attention to the hydraulic fracturing industry and related sectors to ensure that workers in these industries have the workplace safety and health protections that they need and deserve. “