Microphone Grabbed Out of Hands of Reporter Questioning Honeywell CEO 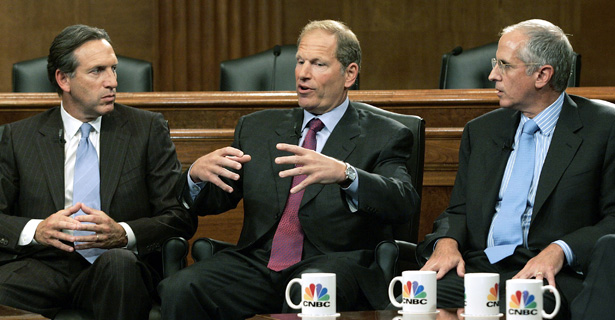 For the last two years, I have covered union busting efforts by Honeywell, their close connections to President Obama and how federal agencies have assisted Honeywell in three different labor struggles since Obama came to power.  In particular, I covered a 14-month lockout at Honeywell uranium plant in Metropolis, Illinois, where Honeywell cheated on tests for replacement workers, who later caused several releases of radioactive gas into the atmosphere. Instead of their picket line with the striking workers as he promised to do during his campaign, Obama decided to fly with top Democratic donor and Honeywell CEO David Cote to India while the lockout was still going on. (Today, Obama and Cote will appear at Honeywell’s Minneapolis facility for an event on the economy).

Recently, on May 10, at around 2 p.m., managers walked into Honeywell's uranium conversion plant in Metropolis, Ill., and told workers—both union and nonunion—they had to leave the plant immediately. Multiple workers present say a manager told them the sudden dismissal was because the company had to investigate "sabotage" of plant equipment. Honeywell has since allowed non-union contractors and salaried employees and managers back into the plant to operate it as the company's investigation continues, but still hasn't allowed the full unionized workforce to return.

Then on May 14, according to United Steelworkers Local 7-669 President Stephen Lech, an engineer—manning a post typically manned by a union employee—caused a release of highly toxic radioactive UF6 gas for over seven minutes. Contrary to company policy, no alarms were sounded informing the community of the release of this deadly gas. Fortunately, no one was hurt by the accidental release of UF6 gas. Yet another leak of the same gas occurred at the Metropolis plant yesterday, although again it appears that workers fortunately escaped serious injury.

I had attempted to get Honeywell to comment on the matter, but as the company has done throughout the two years I have covered their union-busting, they refused to answer the question. Earlier in May, Plant Manager Larry Smith hung up the phone on me when I contacted him.  So when I heard Honeywell CEO Dave Cote would be talking at a forum on “Revitalizing America: Encouraging Entrepreneurship,” hosted by Rep. Tim Scott (R-S.C.), I decided to go ask him a few questions about Honeywell’s various labor disputes.

Yesterday morning, I showed up at the event in the basement of the U.S. Capitol Building’s Visitor Center where Cote was speaking. I identified myself as a reporter for In These Times and gave my card to a Republican House staffer, who then handed me a media badge for the event.  It was one of the most bizarre events I have ever covered, as if those secret meetings between congressman and CEOs that union guys always talk about actually existed.

The assembly included lobbyists, corporate executes and GOP congressmen, talking about how they were going to push for deregulation and lower taxes. Even Rep. Hansen Clarke (D-Mich.) showed up to brag about how he was working with the Heritage Foundation to find ways to lower corporate taxes. Clarke was met with wild applause from the suit-clad room.

Cote spoke for about 15 minutes on how he was able to make Honeywell a successful company through “innovation,” and said he could make it more successful if corporate taxes were lowered even further. When it was time for questions for the panelists, I stood up and was called upon. I began to ask Cote about the uranium release caused by a non-union engineer working a job performed by a union worker. Cote began to frown and looked annoyed with my question. Immediately, I started getting dirty stares and smirks from the room of assembled corporate lobbyists and allies. The moderator of the panel interrupted me to say “Sir if I can interrupt. This is to hear from entrepreneurs".

Within a few seconds, Nicolas D. Muzin, a senior adviser for Rep. Scott, grabbed me and attempted to physically remove me from the room. I informed Muzin that I had never been treated like this as a reporter.

Later, Rep. Scott, who is the sponsor of a bill to deny food stamps to the families of workers on strike, very politely took me aside in the hallway. Rep. Scott explained that after the panel there would be some time where I could ask the panelists some questions. After the panel ended, I went up to Cote and told him “I want to talk you about Metropolis, Illinois.” Cote immediately ran out a fire exit with an entourage of people following him. An unidentified man who was with Cote blocked the fire exit and shoved me as I attempted to walk through it. I informed him that this was an illegal to block a fire exit like this.

I saw another fire exit that was nearby and ran through it to find Honeywell CEO David Cote in a room behind the set of doors. Upon seeing me, Cote and his entourage immediately began to run away and quickly exited through another set of doors. I attempted to follow Cote through that set of doors, but was blocked by the same unidentified man and another man, whose nametag identified him as Honeywell External Communications Director Rob Ferris.

Ferris barricaded me in the room for several minutes and atferwards had the Capitol Police detain me. They released me after 10 minutes when they realized I had done nothing more than try to follow a CEO down a hallway. Indeed, Capitol Police asked me if I wanted to press charges against Ferris for false imprisonment for barricading me into the room, but I declined.

President Obama is doing an event with Honeywell CEO Dave Cote today in Minneapolis if any reporters want to ask about this incident. A better question might be why has Honeywell been able to use the federal government to attempt to bust unions in three different major labor disputes. Either way, try to make sure you're in a room with multiple exits.